Mobile TV: Do We Want It? 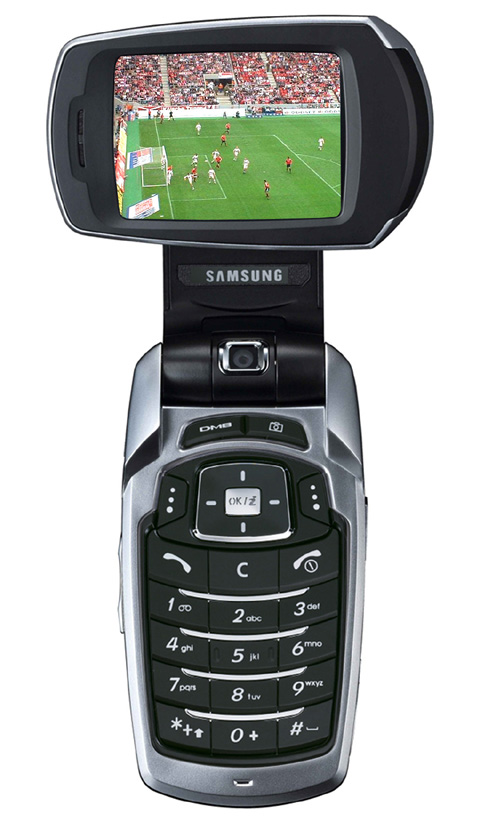 What is at the centre of debates about convergent technologies and cultures are questions of how we make use of these new technologies and networks to fashion shared as well as individual spaces in our lives, relationships, and ideas. Thus far, however, the developments surrounding and discourses characterising mobile television have tended to be obscure these developments and struggles in social relations and cultural politics – something that I think merits considered and urgent attention. (Goggin, 2006, p. 186)

In my last column, I raised some questions regarding the place of the conceptual turn to mobility to describe and facilitate understandings of the changing relations of power, the movement of capital and bodies and the ephemeral qualities of digital technologies. I would now like to explicitly address the mobile modification of television, mobile tv.

The answers to these questions are still unresolved largely as the result of the long-standing tension in the telecommunication industry’s struggle between content provision and carrier service, interoperability between services and devices, and consumer resistance to its high costs (particularly when individuals can watch television content on traditional sets and on the internet for minimal costs).1
The most recent industry data, IDATE’s mobile tv survey 2008, continues to predict high growth rates in the mobile phone industry (see Table 1) and increased ownership of mobile phones over other telecommunication services (see Figure 1). Moreover, the little empirical data that does exist regarding American uptake of mobile tv has found that its most significant users of mobile tv are young men (Table 3). 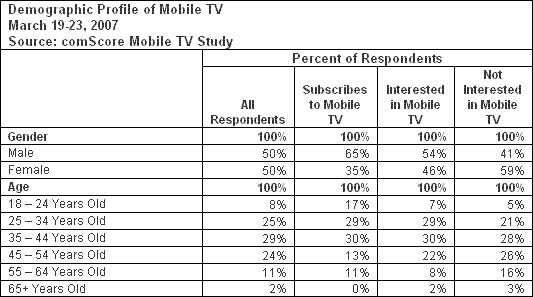 Despite industry predictions that mobile tv has significant market potential – it has not done well in North America. I would suggest that the questions I asked earlier have played a role in transitioning citizens, consumers and users from one form of media practice, large screen stationary television viewing, to another mobile, small screen one. Take up has been slow and the limited consumer data we have suggests that the market for this type of service is largely the purview of young men. One could speculate that if young men shape the mobile tv market, largely because of their purchasing power and access to more leisure time, this demographic could limit the kind of programming that may attract other kinds of viewers and consumers. However, I would argue that the kind of empirical data and theorizing that we do have about how North Americans use mobile telephones (World Internet Project, Networked Publics, Katz and Aakhus, 2002; Ling, 2004; Goggin, 2006; Gow and Smith, 2006; Horst and Miller, 2006; Katz, 2006; Castells, et al, 2007) provides us with some insight as to why uptake has been slow and ways that we might want to consider the potential for other media forms emerging from mobile phones.

Many of the cited scholars have engaged with questions about the transition from landline telephones to mobile telephones – how have we taken practices from old media to new ones. This line of inquiry is well articulated by Lev Manovich’s (2001) in The Language of New Media, as he analyzes:

…the language of new media by placing it within the history of modern visual and media cultures. What are the ways in which new media relies on older cultural forms and languages, and what are the ways in which it breaks with them? What is unique about how new media objects create the illusion of reality, address the viewer, and represent space and time [I would add place]? How do conventions and techniques of old media – such as the rectangular frame, mobile viewpoint, and montage – operate in new media? (p.8)

Given that much of our understanding is premised on theorizing the ‘old’ to the ‘new’ – what have we observed about how consumers, users and citizens have taken up in mobile phone practices? One of the most prevalent uses of mobile phones is communication — people like to talk and they are expanding their telephone talk from the confined ‘private’ spaces of home and work to just about anywhere, anytime, any place. So could it be that television viewing outside of the constraints of the household has had a longer public history in sports bars, airports, that as Dowler (2002) has argued the tv has become the ultimate ubiquitous object. My point is that we are asking one device to deliver many media forms and practices — and that may be we need and want more than one device (Middleton, 2007). Moreover, other factors such as non-proprietary software2 have closed interventions and innovations – and ultimately, I would argue development of applications that could make the delivery of tv more user friendly and less costly. However, I do think it is important that we also consider the ways in which consumers, users and citizens have taken up visual communication strategies with their mobile phones in unanticipated ways.

To more explicitly address Goggin’s observations and pleas, there have been a number of interventions and strategies that have circumvented expensive mobile telecommunication costs and that have worked within the confines, constraints and possibilities of mobile phones. Some of these include a series of mobile phone film festivals and artists’ projects. These interventions and strategies have generally taken up the sound and video capacities of mobile phones. Festivals such as Pocket Films, CellFlex, and artists’ projects such as murmur, Antoni Abad’s international projects facilitating community use of mobile phones, and Obx Labs have creatively demonstrated the aesthetic, political, and community potential of the small screen form and interestingly its multi-casting and distribution potential.

Hence, modifying tv with the mobile is not doing well as ‘old’ media practices are not transitioning well to mobile phone platforms — what is more exciting and interesting in terms of the mobile and visual communications have been the ways in which some artists’ projects make demands of and work with what mobile phones can do.

Middleton, C. 2007. “Understanding the BlackBerry as an Instrument of Organizational Culture,” Continuum: Journal of Media and Cultural Studies. 21:2,165-178