Darkly Dreaming of Dexter, Part 2: Sympathy for the Devil 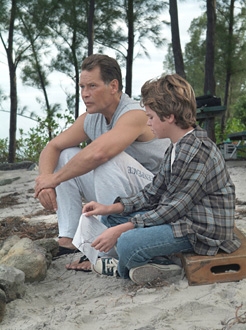 Harry & Young Dexter: Early Lesson in the Code of Harry.

After having recently watched both seasons of Dexter on a four-day viewing binge (inspired by freezing temperatures and the Writers strike), it seemed to me that the only way to understand the fandom and fascination that the series inspires was to try to locate—and dissect—the “heart” of the series. Clearly, Dexter’s fans aren’t exalting his actions (behaviors that, in real life, would be vilified), however, the pleasures of this particular text stem from the all-access pass behind the curtain given to the audience: the insider’s guide to the sociopath.

“Man, he can rationalize anything,” my friend, Paul said with an almost admiring chuckle, as we had our ritual midnight viewing of Dexter. Paul’s induction into this fandom was a first season marathon (thank you, TiVo) during which six folks ensconced in my living room collectively begged for “just one more episode” until the wee hours of the morning and the season finale. The aforementioned rationalization—Dexter’s revelation that maintaining his freedom was absolutely necessary for the sake of those who care for him (even if the price was the life of his innocent adversary—elicited a reaction that might be interpreted as qualified approval from Paul, one of the kindest humans I know. Having indulged in admiring chuckles myself (and I am not nearly as nice as Paul), this essay forced me to interrogate both the ease of my passage into Dexter’s subjectivity and the ways that my identification with the character grew, despite (or, perhaps, because of) the “principled” nature of his amoral actions.

Is the attraction of a televisual trek to the shady corner of human nature where myriad pathologies collide tied to, what Carly Kocurek referred to as “the creation of serial killer as celebrity in the 1970s and ’80s” fueled by “…full collection[s] of Serial Killer Trading Cards and VHS copies of The Texas Chainsaw Massacre and Stephen King movies?” Is it tapping into the zeitgeist of a historical moment when, as Afsheen Nomai asserted, “[the] country… widely approves of the death penalty, and seems completely ambivalent about the erosion of our civil rights?” Or is audience reaction to these heroes/antiheroes indicative of what Grace Moore states is an ongoing love affair with “characters who take control, who come to our rescue, who have been formed by circumstances outside of themselves” such as “Wolverine… Bruce Wayne as ‘the Dark Knight,’ …revenge films with Charles Bronson [Death Wish 1-4], Antonio Banderas in the Desperado movies…[even] Jack in The Nightmare Before Christmas.” Clearly, these conflicting assertions ring true: the constructions of serial killer as rock star (exemplified by the continued fascination with Charles Manson) and the embodiment of a desire for a definitive (or at least swift) metering out of “justice” (read: punishment) still hold sway over some segments of popular consciousness. Nevertheless, something separates the construction of Dexter from the aforementioned groups of actual serial killers, cinematic vigilantes and his televisual murderer brethren: his adherence to and internalization of lessons his father taught him—which is, arguably, both his sentence and his salvation. 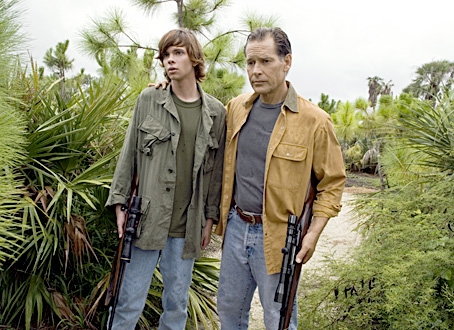 Rationalization allows one to justify unacceptable feelings and/or inexcusable actions in a logical manner that avoids the true explanation for the behavior. The “Code of Harry” provided rationalizations that were as vital to Dexter as the physical and psychological training from his father. From the moment that Harry Morgan carried the young Dexter, crying and soaked in blood, away from the heinous scene of his mother’s murder, the boy became his responsibility. When it comes to light (in Season 2) that Harry’s desire to care for the boy may have been inspired more by guilt than altruism—Laura Moser’s status as his informant (and his lover) put Dexter’s mother on the wrong end of a chainsaw— it is still difficult, if not impossible, to cast him as a bad guy because the code he constructed for Dexter probably saved the boy from a worse fate. One could hypothesize that Dexter’s pathologies—the incapacity to love or to feel other than shallow emotions (feigned for a deliberate effect), the lack of empathy, guilt, remorse or shame—could only doom him to a life as a monster. But Harry helped Dexter to become a monster with a purpose: an avenger, if you will. The code was simple: the killing must be “just,” the guilt of the person must be certain (take time to gather the evidence, make sure you have the right person), prepare meticulously and act with extreme care and the killing of innocents is NEVER allowed.
In so doing, Harry gave purpose to Dexter’s pathology:

Harry: “Son, there are people out there who do really bad things. Terrible people. And the police can’t catch them all. Do you understand what I’m saying?”
Teenage Dex: “You’re saying… they deserve it.”

Furthermore, the tenets in Harry’s instruction gave Dexter social survival skills on blending in (performing normalcy to keep the monster invisible), a rule-driven way to channel his homicidal urges and keep them under control and, perhaps the most important directive, don’t get caught. Despite its cold pragmatism, there is certain resonance of virtue to the code of Harry –more akin to obsessive need to bring a killer to justice driving Alan Moore’s Rorschach (from the graphic novel, The Watchmen) than the omerta and honor code depicted in cinematic and televisual mob tales from The Sopranos to The Godfather. “It’s not about vengeance,” Harry said, “not about retaliation, or balancing the books –it’s about something deep inside.” For Dexter, that something deep inside was the compulsion to kill, the monster kept in check by the unwavering adherence to a particular familial ideology passed from father to son out of necessity but also out of the desire for evil to do good. 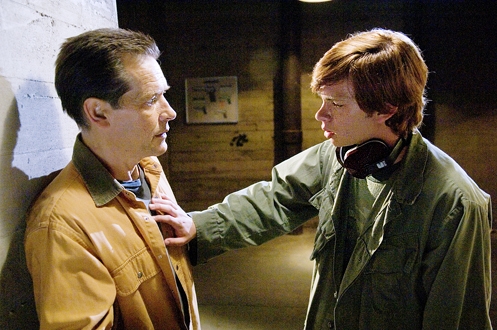 Some might contend that Michael C. Hall’s assertion that “Dexter, in spite of everything, is an eminently relatable guy” seems either disturbing or ludicrous. However, his insight into the character taps into questions that we have “about our authenticity and…[the] secrets that we keep that are potent in terms of our interior landscape” and Hall’s assertion that, “We all have a shadow side, maybe not as formidable on paper as Dexter’s” by extension can be applied to the rationalization processes that is part of our daily lives. While most of us don’t fit the DSM-IV definition of either “psychopath” or a “sociopath,” I would contend that we can relate to Dexter for myriad reasons connected to his feelings of alienation, confusion over emotions, divided loyalties, the casting of ourselves as (figurative) predator or prey, minegar curmudgeon or silent martyr, independent free thinker not impacted by the lessons our parents told us and the good son or daughter eager to emulate and please without question.

The series’ second season ends with another privileged glimpse into Dexter’s interior life and the challenges posed by declaring who and what you believe you are.

Dexter: Not long ago I had a dream that people could see me for what I am. And for a brief instant in time, the world actually saw my bodies of work. Some even cheered. But as it turns out, nobody mourns the wicked. … That’s why he gave me a code. It cost him his life, but it kept me alive through incredible trials. The code is mine now, and mine alone. … I’m no longer his disciple. I’m a master now. An idea transcended into life. 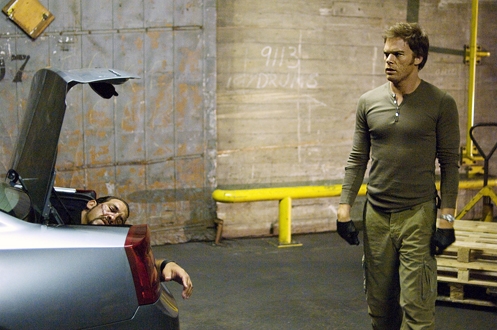 Dexter All Grown Up & Acting Out on His Own.

This closing passage speaks directly to a sense of self and direction. Our senses of self are inflected, for better and for worse, by the stories our parents told us and by particular familial ideologies, whether we accept or reject them. Like Dexter, we have the ability—and, sometimes, the inclination—to dip into rationalization to avoid some essential truth that we cannot or will not process. We deal the best we can with the tools we are given, we identify instead of compare and we do something akin to acknowledging and moving on—whether you are a harried scholar in search of inspiration or a Dark Defender looking for the next deserving quarry. This makes sense to me but I’m not sure how much comfort I find in that.