Breeding Our Way Out of Trouble? Children of Men and Lost 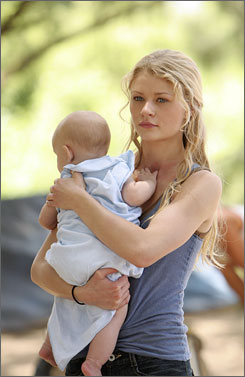 Claire and baby in Lost

Apparently, my learning curve is as flat as my new plasma TV screen. No matter how many times I see it and despite a bookshelf stocked with Gramsci and Foucault, I can still be amazed by just how absurdly contradictory our culture can be. Though I have to say, I take some odd pleasure in the really crazy shit that can show up out of the volatile matrix of economic forces, residual and emergent ideologies, conflicting political interests, and the seduction of denial. For example: Lunchables. Remember that moment in the early 1990s when environmental awareness had seemingly turned a corner, when being green was becoming hip? At that very moment came Oscar Mayer’s Lunchables. Wrapped in an insane amount of plastic and marketed as the busy parent’s holy grail, Lunchables seemed like an absurdist parody of unfettered American consumerism appearing just when America claimed to be discovering the value of being fettered.
[youtube]http://www.youtube.com/watch?v=fQKXCYepRSY[/youtube]

I found the 2006 film Children of Men similarly absurd. The film was highly praised for its grim cinematography and its eerily convincing vision of a not-so-distant future where the extinction of humanity looms and socio-political chaos erupts on a global scale. At a time when reports about pandemics and global warming fill headlines, it is easy to read the film as a warning about the consequences of human social systems. Amazingly, though, the cause of the world’s crisis in the film is not the unchecked abuse of the environment by the consumption habits of an ever-growing human population. Quite the opposite, in fact. It is humanity’s inability to reproduce that creates this dystopia. A telling narrative choice, I must say. Even if one reads humankind’s sterility as an analogy for the self-destructive path we are taking, the subsequent narrative still encourages us to be intensely invested in human reproduction. (The film is hardly subtle on this point.)

In this regard, the film reflects and reinforces a vast web of heteronormative, androcentric, christian/religious, humanistic, and capitalist ideological assumptions: that reproduction is an inalienable right, that social relations are a reflection of familial relations, that human culture only exists to be passed onto the next generation, that growth is good, and that human life is sacred. At a time when population growth threatens the future of humanity, a narrative that locates hope and the future in the sanctity of human reproduction seems absurd-or predictable (its often a fine line, after all).

As I excitedly sat down to watch the new season of Lost (my favorite show on TV since last year’s season finale), I was struck by the recurrence of this trope. Lost offers another narrative about social life and human psychology after a catastrophe. And again, reproduction and its problems become narratively central. Here we get a humanity-starting-over story with heteronormative, biblical overtones about the importance of being fruitful and multiplying. (It seems telling, for example, that a series that works so hard to reflect racial, generational, and national diversity, would fail to include a single openly non-heterosexual character.) And as in Children of Men, the inability to reproduce becomes a key driver of social crisis. Every woman who gets pregnant on the island dies in childbirth-a fact that fuels the political conflict between the survivors and the Others and a great deal of the series’ narrative tension thus far. I don’t want to reduce the ideological complexity of Lost’s multi-season, narrative twists and turns. (The dark omen connected to Claire’s pregnancy in the first season, for example, suggests there’s more to unpack on this issue). Nevertheless, the series (at least in certain narrative arcs) does reflect the (over)valuation of reproduction as essential to the stability of human society. (I doubt Lost and Children of Men are unique in this regard. From what I saw of its first season, for example, Battlestar Galactica might be rife with such reproductive-imperative narratives as well.)

So, at a time when we are increasingly aware of and anxious about the threat of global climate change (a problem certainly exacerbated by population growth), we get post-apocalyptic narratives in which human reproduction is actually the solution. Just when we need to find ways to create a sustainable future for our kids, we get stories that tell us that the future will only be ensured by having kids. What are the consequences of this cultural obsession with reproduction-an obsession so hegemonic that it finds expression in both christian conservative arguments about the culture of life and neoliberal politics of gay and lesbian families? Rooted as it is in religious doctrine, liberal ideals of individual rights, and the persuasive power of “the natural,” our feelings and assumptions about the value of reproduction run so deep that there seems little room for thinking outside of the standard story. We fail to do so at the peril of our kids.

For me, the absurdity of this ideological relationship is a Lunchables moment-pleasurable in a perverse way. Of course I am woefully naïve to expect that culture would behave any differently. After all, we created the world we now find ourselves in with the help of such ideologies.

Does anyone else have a favorite Lunchables moment?

1. Claire and baby in Lost.