A Place at the Table: Aliens in America and US policy in the ‘Islamic World’ 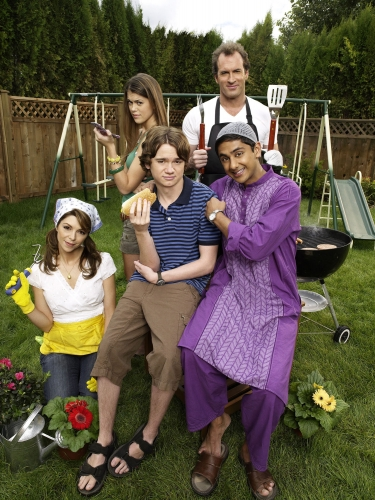 Raja and his host family in Aliens in America

CW’s debut show for the Fall ’07 season, Aliens in America was just a typical CW show — cheaply done, designed for the CW’s teen demographic, and striving to pull in some adults as well, to revive the mixed demographic appeal of Roseanne and The Cosby Show. Aliens in America also represents an attempt at “edginess” for the network’s struggling brand. A Pakistani exchange student and his “fish out of water” experiences in a small Wisconsin town would provide the edge, seeking the kind of impressive uptick in publicity generated by the CBC program Little Mosque on the Prairie.1

Opportunism (we will be the first US sitcom to use a Muslim) and desperation (how to compete with Disney’s domination of the high school sitcom) probably explain how this inane comedy about a Midwestern small town where no one has seen an immigrant before (a fallacious premise, but never mind) got greenlit. Even the show runners seemed mightily surprised to find themselves doing press for a “controversial” show and facing questions about how they are avoiding getting “Salman Rushdied”.2 The sitcom bears resemblances to Freaks and Geeks and The Wonder Years — the host family includes an overbearing mother, a conformist sister and a lonely but intelligent son. The writers gave Raja his Pakistani origin in a late plot twist (the character was originally a European exchange student). Arab Muslims seemed too dangerous, and it was thought best that the country be an ally of the US. Research on Pakistan consisted of reading wikipedia entries. A staffer on the show was elevated to the role of adviser. (According to Kamran Pasha, there are only two Muslims among the entire membership of the Writers Guild). The actor cast in the role, Adhir Kalyan, had grown up in South Africa and was selected from an on-line audition in London. 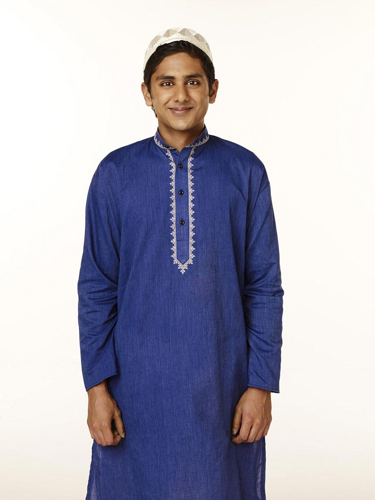 The amiable, slightly cross-eyed actor is perfectly cast to place Muslims in that long popular culture tradition of the “devoted servant.” Like so many African-American butlers and Latina maids, he joins the long line of ethnic others who are neutralized and made “positive” by displaying their deep love and willingness to sacrifice for the hero. Rajah’s repeated prayer,food, and dress restrictions generate lots of gags, as do his naïve faith in the humanity of others, including his fellow classmates. To deepen the character, by adding a flaw to his unbelievable saintliness, the writers introduced challenges to his outlook on women. (He is surrounded by scantily clad cheerleaders and porn in his host home). But Rajah softens the hearts of the conservative, consumerist family with his geekiness, his cheerfulness, and even his willingness to do housework. Adhir Kalyan embodies this grateful, unthreatening, “good” Muslim in his off-screen publicity as well: “I’ve been very fortunate coming out to Los Angeles….I really enjoy Los Angeles and have found American people to be nothing but hospitable and warm. And I think as a result of the country’s politics, American people tend to take a lot of heat as people, which is sometimes unjust, I feel.” The show’s ratings have been abysmal, and this would not be a story worth recounting if it weren’t for the promotion of Aliens in America in the world of public diplomacy. 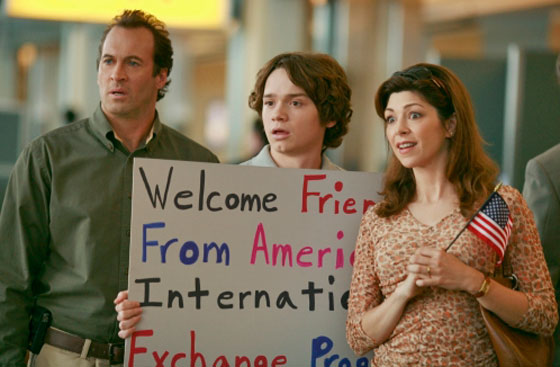 What makes Aliens in America interesting is the uses to which it has been put. The sitcom was screened for a special Ramadan Iftar dinner hosted by the Brookings Project on US Relations with the Islamic World. One of several projects run by the Saban Center for Middle East Policy, it “is designed to respond to some of the profound questions that the terrorist attacks of September 11th have raised for U.S. policy.”3 Aliens in America was frequently praised at a series of events and Working Group meetings in Los Angeles, where television and film industry participants have offered ideas about the possibilities and limitations of the entertainment industry’s more positive contribution to diplomacy efforts that might enhance the image problems of the US abroad.

Brookings project directors emphasize the “cultural” nature of the assumed conflict between the US and the Islamic world, a position buttressed by the tremendous impact of the “clash of civilizations” thesis.4 The problem is defined in terms of the possibility for American popular culture to unintentionally offend Muslim audiences, particularly when negative images of Muslims are portrayed. The Center’s mission includes raising the profile of the moderate Muslim majority, and hosting visits by Egyptian new age Islamic preacher Amr Khaled, for example, who is praised as “the anti- bin Laden”, and a superstar of Arab satellite television and the Internet.5 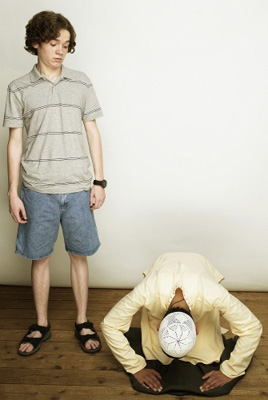 Prayer as a punch line?

How does Aliens in America qualify as a worthy object of diplomatic attention? The answer is that as hopelessly bad as the show is, it comfortably fits the prerogatives of the Brookings project. The Saban Center at Brookings follows these implicit rules for diplomacy demand the following:

–History begins in the 1990s. No discussions of the colonization of Arab nations or the history of United States interventions in the region since World War II are permitted. Nothing is referenced before the first US war in the Persian Gulf or the launching of Al-Jazheera.

–Anti-American sentiment is the result of poor public relations and careless Hollywood films and can be remedied without reference to the actions of the US government or US corporations. These can be remedied without any alteration in US foreign policy, such as support for authoritarian regimes, human rights abuses of prisoners or military withdrawal from Iraq, Pakistan and Afghanistan.

–The remedy is a happy multiculturalist PR campaign of education that resembles a fifth grade study of religious differences: learn a few Arabic words, sample foods from the region, discuss religious tolerance. New media and new technologies will make this PR problem easier and faster to solve.

—Lumping all Muslim countries into an undifferentiated mass called The Islamic World is preferable to references to specific nations, with their specific histories of US intervention and shifting status according to American foreign policy objectives. Occasionally, some friendly, rich nations open to global partnerships, and conferences, may be praised. Brookings runs an institute in Doha, the capital of Qatar. “Bad” countries with decades of economic decline and human rights violations like Egypt are best forgotten, Palestine should never be mentioned.

–Terrorism is something perpetuated by non-state groups, not by governments, the US military or CIA. Redefining the actions of non-state terror groups as not based on land rights, the desire for self-determination, or retaliation against authoritarian regimes supported by the US military or the CIA is crucial. Terrorism is constructed as purely religious fanaticism.6 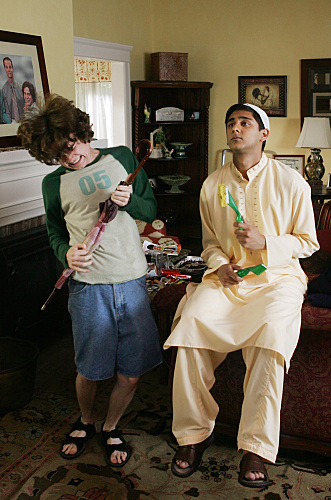 Fitting in with the family

Saban’s efforts at Brookings seem geared towards gaining legitimacy as a force in US foreign policy. His fortune was made in television—on Power Rangers, in fact, and these same fortunes fund the Saban Center. But then what is Saban doing in the Middle East policy business anyway? Saban was born in Egypt, and immigrated to Israel in the 1950s. After working in music and television licensing (including Dallas on French TV, and importing Anime to France) he struck it rich with the Power Rangers franchise. Since then he went on to formidable deals in European media (including the German Kirch, Fox Kids, etc). He achieved his first billion by 1995 and is now worth over 2.5 billion.

Saban’s explicit goal is the protection of Israel. He told an Israeli newspaper that intends to bequeath half of his vast fortune to “fund combat units” as well as the Israeli defense fund. Saban is extravagantly modest: “Look, I don’t even sell cartoons. I sell former cartoons. So what do I know?” Yet his fortune and his desire to wield direct political influence on US policy in the Middle East are alarming for someone who calls his position on Israeli “security” as “very far to the right.”7

Public diplomacy sounds good in theory, in so far as it is an improvement over the incendiary rhetoric of the Bush years. But Saban’s project also acts as a funnel for funding opportunities, including for media production, geared towards education about Arab Muslim nations, Pakistan and Indonesia. For the most part the requirement boils down to this, as former president of the Middle East Studies Association Laurie Brand puts it: “In many cases, those whose ideas do not fit the policymakers’ categories are simply excluded. The most obvious and perhaps now banal, but also lethal, example is that of terrorism and terrorist. Either one accepts the language and participates in using it, or there is no place at the table.”8

Middle East scholars have faced restrictions on their research—as well as tantalizing offers of State Department funding–since the Cold War. Media producers—especially desperate TV producers– know much less about these kinds of political constraints and are happy to bask in the attention of the Brookings Project and the credibility it brings—even to a thoroughly misguided (to put it kindly) effort such as Aliens in America. Meanwhile documentary filmmakers who have done serious research into the history of US interventions and atrocities in the majority of Muslim nations are nowhere to be seen on the guest list.

It is highly doubtful that Aliens in America will be renewed—especially when the producers chose Pakistan because it was a US ally, and got much more than it bargained for with the actions of Musharraf and the assassination of Bhutto this year. The Brookings Project ostensibly wants to praise any Hollywood producers who deviate from the demonic Arab Muslim terrorist of action films,9 who venture to represent Islam in any kind of positive light. Showcasing a program like Aliens in America would be laughable. Except there isn’t anything funny about American ignorance any more.

Image Credits:
1. Raja and his host family in Aliens in America
2. Adhir Kalyan as Raja
3. The host family surprised to meet Raja
4. Prayer as a punch line?
5. Fitting in with the family