Signal to Noise: The Paradoxes of History and Technology in Battlestar Galactica 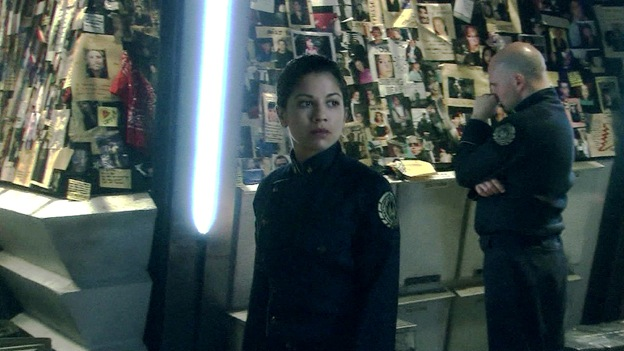 Commemorative wall on the Galactica after the Cylon attacks, recalling similar memorials in New York and other cities after 9/11

Battlestar Galactica speaks to the events of 9/11 and the subsequent “war on terror” in ways that are hard to miss: in place of a surprise attack on the World Trade Center that leaves Americans devastated and the U.S. government bent on chasing the perpetrators (who have been figured as “programmed” by terrorists’ ideology and thus as not quite human), in Battlestar Galactica, the not-quite-human Cylons launch a surprise attack on the Twelve Colonies that leaves humanity’s home worlds devastated and the survivors on the run from further strikes. Indeed, as producer Ron Moore puts it, “What happens to the people in Galactica is what happened to us in September [of 2001], but in several orders of magnitude larger. It’s sort of like saying September 11th happens, but the only people who survive are the people inside the Twin Towers” (Interview with SFX Magazine, June 2002).

At first glance, Battlestar Galactica‘s ongoing commentary on our current cultural climate unfolds by way of engaging familiar (perhaps too familiar) narrative strategies; yet these narratives also shift in unexpected ways. For example, instead of making a sharp delineation of “us vs. them” (as in the war on terror), the opposition between humans and Cylons breaks down repeatedly in the course of the past few seasons on Battlestar Galactica, making the seemingly easy alignment of the humans as the “good guys” and the Cylons as the “bad guys” increasingly questionable. The occupation storyline during the last season even went so far as to place the human survivors into the position of being members of an insurgency movement — willing and able to deploy “terrorist” strategies, such a suicide bombings, for their cause — with the Cylons determined to show humanity “the glory of peace” by enforcing “complete control.” Beyond a simple role reversal of the usual identification of “hero”/“villain,” “occupier”/“terrorist,” however, Battlestar Galactica also shows us the internal conflicts on both sides. For instance, those under occupation disagree about the shape of the resistance movement, asking themselves: are suicide bombings really the solution, especially because humanity’s numbers are already dwindling? How far can you co-operate with the Cylons before you become a collaborator? Is collaboration a crime punishable by death? Meanwhile, the Cylons debate the treatment of humanity: should humans be wiped out in the name of god, or are they worth saving? In the face of so much resistance, can you still strive for peaceful co-existence? Or do you intervene in the form of public executions and reducing humanity to “a more manageable size”? In exploring these questions, the parallels to recent events involving American military actions in Iraq are impossible to overlook. Yet, Battlestar Galactica also reminds its viewers that questions about the ethical dimensions of occupation, resistance, torture, and war have long histories — the specific use of the term “collaborator,” for example, evokes associations with Vichy France. This angle further complicates the picture by not only reminding viewers that there are historical precedents to our current situation, but also by asking us to recognize the complexity of that history — one that cannot simply be reduced to the story of the U.S. army as the heroic liberators. In narrative arcs such as the one dealing with the Cylon occupation, Battlestar Galactica thus remixes pertinent questions and concerns about the war on terror with varying degrees of verisimilitude and with varying degrees of predictability. 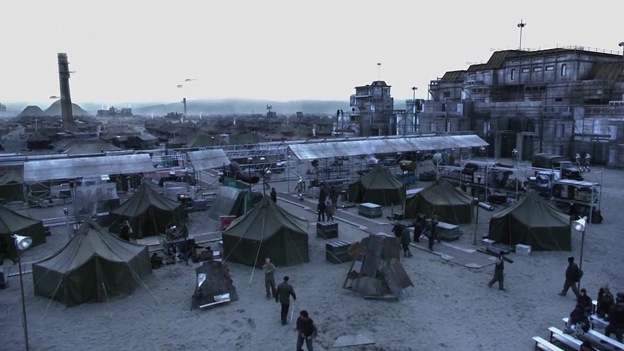 There are other moments and configurations in Battlestar Galactica‘s narrative world that also speak to current cultural anxieties, but the “messages” here is less clear; they become confused, filled with noise, and, because of that, they are perhaps more interesting than the rather straightforward commentary on America after 9/11. In Battlestar Galactica‘s diegesis, the history, present, and future deployment of technology emerges as a precarious nexus of meaning. It appears both as promise of salvation and as constant threat of destruction. Salvation appears in the form of Galactica’s non-networked computer system, which saves the ship and its crew from an attack via a Cylon computer virus; destruction looms large when the Cylons trace the radiation of a nuclear explosion back to its source, namely humanity’s temporary refuge on New Caprica — a turn of evens that leads to the aforementioned occupation. Technology is also called upon as the means that might distinguish humans from Cylons, but not even DNA testing can offer sufficient answers. Moreover, technology reconfigures the meaning of both love and religion. As Julie Levin Russo also notes in her piece in this issue, love becomes a reproductive technology when it turns out to be the crucial component in producing the first human-Cylon baby. Likewise, religion turns into a navigation system that charts the way to Earth, the mythic lost colony and presumed safe haven for humanity’s survivors. In another instance, religion and technology become nearly inseparable when one Cylon sets out on a quest to uncover the face of the Cylon god, a quest that is enabled by a series of quasi-ritualistic suicides and subsequent “downloads” into a new body that affords glimpses of the Cylon god in the brief moments between life and death. In all these sites, human survivors and Cylons alike try to yoke the possibilities of technology to their search for meaning: they attempt to filter the noise of contradictory opinions and experiences into a signal that might finally provide answers to the perhaps most fundamental question that Battlestar Galactica raises, namely, what does it mean to be human in a world in which the boundaries between man and machine, self and other, has been utterly compromised?

Even though the uncertainty arising from this compromised position is inscribed at the heart of Battlestar Galactica‘s diegesis — an aspect that serial television, with both its drive toward an open-ended future and its worlds full of reminders of the past, would presumably thrive on — it appears that uncertainties of this magnitude need to be brought to an at least temporary resolution. As such, we discover at the end of the most recent season that four out of the five previously secret Cylon models are in fact members of Galactica’s own crew. Being literally hailed by a signal that only they can hear, figured as an unidentifiable but also strangely familiar melody disrupted by static that is transmitted through various sources ranging from old transistor radios to the ship itself, the four crew members meet in an abandoned storage room and concede to themselves and to each other that they must indeed be Cylons (discovering one’s “true self” has never been that easy before). They react by desperately clinging to their humanity in an attempt once more to uphold compromised boundaries between “good” and “bad,” human and machine, past and present, origin and destiny — “I’m Saul Tigh. I’m an officer in the Colonial Fleet. Whatever else I am, whatever else it means, that’s the man I want to be,” one of them declares. 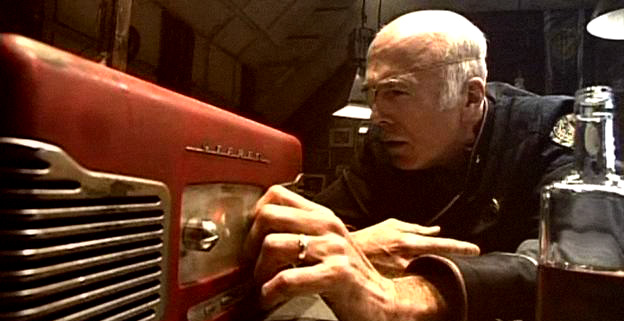 Even the mysterious melody of this episode is recuperated from the uncertain space between signals and noise: it turns out to be a remixed version of “All Along the Watchtower” by Bob Dylan. We might consider the incorporation of the song merely as self-indulgence on the part of producer Ron Moore (as he admitted in the podcast about the episode, he had always wanted to include the song in a TV program), but we can also see it as instance of nostalgic longing for the recent past. The late 1960s, the time when “All Along the Watchtower” had its debut, was also a time of fundamental uncertainties structured around America’s involvement in a complicated war overseas; but through the lens of history, the fault lines of that conflict seem neat and identifiable. In fact, a closer look at both Battlestar Galactica‘s mise-en-scene and narrative construction reveals an abundance of these nods to the past. In homage to the original Battlestar Galactica series, much of the set decoration recalls the style used in the 1978 show: old phone handsets, transistor radios, and books with their corners cut off are ubiquitous on the Galactica. Beyond their significance as acknowledgments of the earlier series, these remnants of “outdated” technology gain new significance in the current cultural context as well as within Battlestar Galactica‘s diegesis. Take, for example, the Galactica’s “museum-worthy” computer system, which consists of independently operating units rather than a network. It is precisely this failure to be up-to-date that saves the Galactica during the initial Cylon attack: The non-networked computer system isn’t prone to a Cylon computer virus that infects the other, more “modern” ships (thus offering the Galactica a moment of salvation, as I mentioned earlier). This nostalgic celebration of nearly-obsolete technology coincides with post-9/11 fears of a networked world, in which terrorist cells might “abuse” the “freedom of information” granted on the internet to co-ordinate attacks against the United States.

Battlestar Galactica‘s easily decipherable criticism of the war on terror is thus frequently interrupted by random bouts of noise emerging from the narrative uncertainties that are mapped onto various aspects of the relationship between humans, Cylons, history and technology. As a way out of these uncertainties, the technological past appears as seductive refuge for both the viewer and Galactica’s human survivors. It seems to recall a time when it was still possible to distinguish terrorists from upstanding citizens, humans from Cylons, utopian visions from dystopian nightmares, self from other, signals from noise — even if this past is a retrofitted fantasy brought to us in the form of recycled television.

Melanie E.S. Kohnen is a Ph.D. candidate in the Department of American Civilization at Brown University. Her dissertation is entitled “Out of the Closet? The Discourse of Visibility, Sexuality, and Queer Representation in American Film, Television, and New Media, 1969-Present.” In addition to her work on the relationships among gender, sexuality, and the media, she is interested in the transnational ties between the U.S. and Asia, particularly concerning the consequences of migration, imperialism, and globalization. She also serves as Managing Editor of Digital Humanities Quarterly.