Downloads, Copies, and Reboots: Battlestar Galactica and the Changing Terms of TV Genre 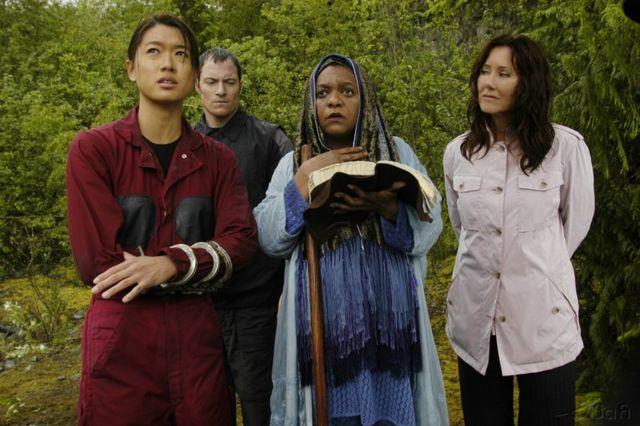 To write about Battlestar Galactica at this juncture is a mixed pleasure. Suspended like a ragtag fleet in the trackless months between the end of seasons three and four, digesting a cliffhanger that many fans, including myself, found weak, and contemplating the knowledge that the coming batch of episodes will be the series’ last, my mood toward Galactica has soured. I won’t say the show has jumped the shark. But certainly it has squandered much of its punch: the taut dramatic sinews and bleakly urgent logic of mimesis and subterfuge that made the 2003 miniseries and first season the most wide-awake science fiction on television at the time no longer seem to define the program.

But the very question of shark-jumping — of marking the point at which a TV program ceases to be a unique and pleasurable engine of stories — lies at the heart of Battlestar Galactica’s popular and industrial fortunes, its cycles of renewal and reinvention. Before its sun sets completely, I want to comment on Galactica’s lessons for students of TV’s evolution. For like the endlessly-reproducing Cylons that form one pole of its narrative, Ronald D. Moore’s series is itself a copy, a “download” of generic material from one moment in broadcasting to another. Operationalizing a key line in the Sacred Scrolls of Kobol (“What has happened before will happen again”), Battlestar Galactica is a particularly successful example of TV’s self-cannibalizing habits. Alongside its explorations of gender, race, and politics — and the equally exciting ways in which it is reshaping models of TV distribution — Battlestar Galactica demonstrates how outdated material can be “rebooted” into something bracingly relevant to contemporary audiences.

Undeniably, one of the things that makes today’s Battlestar Galactica so compelling is its sense of speaking with unusual directness to current times. Apocalyptic sneak attack leading to an endless war on terror; the anguished self-justifications and self-recriminations of a democracy turned overnight into imperial war engine, thief of civil rights, and practitioner of torture; and, most subtly and significantly, an edifice of patriarchal privilege wobbling like a Jengo stack amid the destabilizing forces of nth-wave feminism — Battlestar Galactica remaps the confusions of the spanking-new 21st century through the ever-adaptable lens of science fiction.

But there’s another kind of remapping at work here, one based more on the rhythms of franchise than of zeitgeist. Moore’s Battlestar Galactica is, of course, a remake or — his preferred term — “reimagining” of Glen A. Larson’s Battlestar Galactica, which ran from 1978-1979. Even in that first, Carter-era incarnation, the show occupied an undecidable space between copy and original; it was judged by many, including George Lucas and 20th Century Fox, to be a bald steal of Star Wars (1977). (Evidence of thievery was not merely textual; two of Lucas’s key behind-the-scenes talents, conceptual artist Ralph McQuarrie and visual-effects guru John Dykstra, defected to the Galactica team.) And following its first cancellation by ABC, the series was followed by the much-loathed “relaunch,” Galactica 1980, which ran just ten episodes before dying on the Nielsen vine.

The irony is not just that the 1978-1980 versions of Battlestar Galactica have now come to be seen as canonical by a subset of fans who reject Moore’s version as being GINO (“Galactica In Name Only”). Popular culture, especially from the 1950s onward, is marked by an alchemical process of nostalgia by which even the most derivative texts (Star Wars being the chief example) grow a callus of originality simply through continual shoulder-bumping with the ripoffs, sequels, and series that follow. Such is the nature of the successful media franchise, doomed to plow forward under the ever-increasing inertia of its own fecund replication.

No, what’s striking about the many iterations of Galactica is how cleanly the coordinates of its fantasy lure have flipped over time, illustrating the ability of genre myths to reconfigure themselves around new cultural priorities. Larson’s Battlestar Galactica, even in its heyday, was pure cheese, a disco-hued mélange of droning chrome robots, scrappy space cowboys, a cute mechanical dog, and endless space battles (whose repetitive nature can be attributed to the exigencies of weekly production; as with the first Star Trek, pricey optical effects were recycled to amortize their cost). Back then, it was fun to fantasize planetary diaspora as effervescent escape; the prospect of being chased from our homeworld by cyclopean robots with a mirror finish seemed, by the late seventies, as giddily implausible as Ronald Reagan moving into the White House. 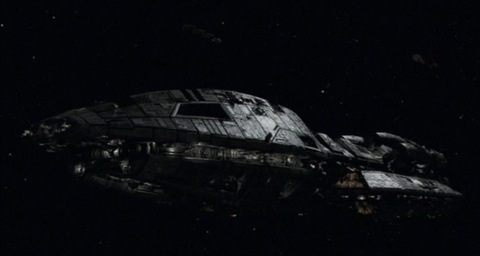 But nowadays, the dream embodied in Battlestar Galactica has inverted frictionlessly into nightmare. The shift in tone is reflected in a new design scheme of drably militaristic grays and browns, brutal drumbeats on the soundtrack, and jittery camerawork on both actors and spaceships — thanks to the digital-effects house Zoic, whose signature visuals lend zoomy, handheld verisimilitude to the combat scenes. It all comes inescapably together to suggest a very different mindset: hunted, paranoid, and starkly conscious of the possibility of spiritual, if not physical, annihilation.

Of course, I’m not saying anything particularly shocking with all this. Identifying 9/11 as a fault-line in the Western imagination had already become a cliché by the morning of 9/12 (though it’s worth noting that, while movies quickly reverted to their old habits, TV, as a more absorbent, responsive medium, has made nihilism and ambiguity the signature aesthetic of dramas like Lost, Heroes, and Mad Men).

What I do see Battlestar Galactica bringing to the table with fresh force is the useful concept of the reboot as a strategy for dealing with franchise fatigue. A liberating alternative to the depressingly commercial and linear “sequel,” the reboot signals a profound shift in how we perceive and receive serial media. We are coming to see serial dramas as generative systems, more about ground rules and conditions of possibility than events or outcomes. (And I would argue that the only sane serial aesthetic is one that allows for occasional misfires; one bad episode does not a series invalidate.) Like the terms canon and retcon, the reboot borrows from brethren like comic books and print lit. Like the term game-changer, it characterizes TV production in computational terms, as ludic algorithm. And like the term show-runner, it signals our growing comfort with the notion of series as industrial product, indeed, as series: a potentially unending churn of a diegetic engine rather than a standalone text.

So what does the future hold for Galactica? I suggested at the beginning of this piece that Moore’s show is dying; the start of the cancer was probably season two’s breathtaking “Pegasus” arc, which strode right over the line of allegory to hold up a mirror in which the United States could no longer misrecognize its practices of dehumanization and torture — of, in a word, terrorism. For me, that prolapse of the national myth marked the beginning of the end. Alternatively, the series carries the seeds of implosion in its governing problematic: once the fleet and its pursuers reach Earth, what can possibly happen next? But whatever the cause, whenever it comes, the demise of this Battlestar Galactica should not be taken as the end of anything. “What has happened before will happen again”; the tale is destined to be told anew, beckoning simultaneously to future and past in the echo chamber of TV genre.

Bob Rehak is an assistant professor of film and media studies at Swarthmore College, where his teaching and research focus on special effects, animation, videogames, and new media. His work has appeared in the Video Game Theory Reader (2003), Film Criticism (2007), and the upcoming second edition of the Cybercultures Reader. He invites you to read his blog.