Putting the ‘F’ Back in Art

Editor’s Note: In accordance with Flow’s mission statement (“to provide a space where researchers, teachers, students, and the public can read about and discuss the changing landscape of contemporary media at the speed that media moves”) we present the following column by a member of the Writer’s Guild of America, which is currently on strike. The WGA has posted this video explanation if you would like further information.

As a comedy writer, I’ve always been fascinated by what people find funny and–let’s face it–people find flatulence funny. When one breaks down the elements of successful comedy, one normally finds that the comedy in question has some “truth” behind it that the audience can relate to. Quite often this “truth” involves something bigger than the audience, something they wish they could control in real life, but cannot. This “truth” causes tension in their real life, whereas the comic version of the “truth” helps them to relieve this tension through laughter. Yet when it comes to comedy on television, why do we feel that laughter has to stem from some edgy, politically-motivated, potentially painful observation of society in order for it to have redeeming value? Personally, I feel that this type of comedy invokes a “laughing to keep from crying” response. Why can’t laughter just be laughter? What I am advocating for is not the widespread acceptance of the scatological on television, however, just an appreciation for the place “fart jokes” have in our popular culture.

Edward R. Murrow argued in his famous 1958 RTNDA speech that television is “used to distract, delude, amuse and insulate us” from events in the real world.[1] Well, television is still used for all of these purposes and more; however, what is different 50 years later is the existence of channels dedicated exclusively to news, and the rise of the Internet. As soon as I open my browser, I’m inundated with news of destruction and chaos. This often leaves me emotionally drained and in search of lighter fair on television; unfortunately, most of the time I’m met with political humor and “ripped from the headlines” violence. Sometimes I just want to have a good gut-wrenching guffaw; however, many believe that television has an obligation to refrain from certain types of comedy that may “dumb down” the nation. I, on the other hand, think that there are worse things than child-like fart jokes, funny flatulence sounds, and gaseous sight gags.

I like biting political satire as much as the next educated person, but much of the time the “truth” behind it is a bit too painful to process. It certainly has its place in the “educational” landscape of television, but sometimes I simply want to escape the real world with a good, mindless laugh. As much as I love Bill Maher, Jon Stewart and Stephen Colbert, their comedy only serves to remind me how screwed up the world is. Maybe I want to be “dumbed down” a bit when things like war, disease and global warming become easy fodder for comedy. So, why not put more benign comedy on television? We’ve seemingly given up our fear of the effects of violence on television, so why is toilet humor still seemingly so threatening? Only in recent years has the word “fart” or any perceived action or noise associated with flatulence been “allowed” by most network censors and the FCC.

“I was a network censor for ABC for about 10 years starting in ’81. Contrary to what most people think, there is no all-inclusive rule book for what is and what is not acceptable in terms of entertainment programming,” says Dr. Philippe Perebinossoff. “During my tenure, ‘fart’ would not have made it through. The same would go for sounds.”[2] There was a time when Blazing Saddles aired on network television without the campfire scene sounds.[3] This scene doesn’t even make sense without the audio! The title of the film doesn’t even invoke a smirk without the reference. Many may have forgotten that the word “fart” was actually one of three “additional” words George Carlin noted couldn’t be said on television in his “Seven Dirty Words” sketch. The justices in the 1978 FCC court case spurred by the sketch concluded that words (like “fart”) “are of such slight social value as a step to truth that any benefit that may be derived from them is clearly outweighed by the social interest in order and morality.”[4] Less than a decade later, you can find both the word “fart” and flatulence references all over the tube.

Nickelodeon’s ironically-titled program You Can’t Do That on Television featured many fart jokes.[5] Nickelodeon has continued to use fart references on its child-friendly channel. In an episode of Ned’s Declassified, the phrase “I am Farticus” is used when students decide to bond together over a farting incident.[6] For a short time, Nickelodeon even had a comedy short than ran between programs that explained the different types of farts. In an episode of The Drew Carey Show, a “toxic” cloud of glow-in-the dark gas is seen hanging over a character as he promises, “It wasn’t me.”[7] Then of course there’s South Park, where Terrence and Phillip face death by flatulence on a regular basis. 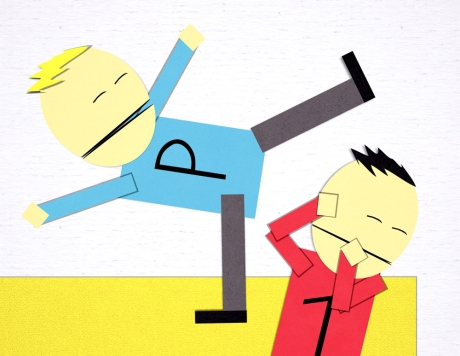 Is the use of farting and/or fart jokes on television a sign of the networks’ desire to appeal to a particular group of people or just a larger group of people? One doubts seriously that bodily function humor was what men like Murrow, Sarnoff or Chayefsky envisioned for television. I doubt seriously that they saw a future of everyday people eating rats, cheating on mates, and getting plastic surgery as the future of television either, but I digress. Everyone passes gas and most people find it funny when they aren’t the ones accused of it. Let’s face it, fart humor has probably been around since the first caveman turned to his cavemate and grunted, “Ugh, pullum finger.” Flatulence has been around in theatre and literature since well before the invention of the Whoopee cushion (circa 1950).[8]

There is evidence of flatulence humor as early as ancient Mesopotamia.[9] Respected authors, poets and playwrights across history have used flatulence in their writings. Aristophanes, Dante, Chaucer, Shakespeare, Franklin, Twain, and Dahl have all used flatulence as the subject of humor. If television is truly the literature of the masses, then it makes sense that its subject matter should appeal to the masses. Finding humor in the passing of gas is a part of the basic human experience; therefore, an occasional humorous reference to flatulence will not bring down polite society if published or broadcast.

Since all of us do it in real life and are typically embarrassed by it, the humor comes from the “truth” of it. The “release of tension” (pun intended) comes from watching someone else get away with what would otherwise be inappropriate in real life. As “lowest common denominator” material goes, it doesn’t make fun of religion, gender, sexual orientation, political affiliation, weight or age. We in academia typically condemn television for its focus on “the lowest common denominator,” but perhaps we are the ones who should reexamine our stance. Are we only able to laugh at that which challenges us?

I leave you with one last thought. When I gave birth to my son, the doctor told me that his first smile wouldn’t be “real” but instead the result of gas. Nonetheless, the first time my baby “smiled,” it was a smile to me all the same. The first time my son laughed was when he passed gas audibly on the changing table. He started to giggle. It was the most beautiful and innocent sound in the world. I started to laugh. The harder I laughed, the harder he laughed. It was our first shared laugh. I suppose this type of humor is the “lowest common denominator” in terms of its origin, but does that mean that society suffers for laughing at it? In the grand scheme of things found on television, I don’t see how–that is, at least until Smell-O-Vision is invented.

I welcome your comments.