Burning Down the House: Community Access TV and the Downtown Art Shows

The Downtown Art Show (1974-1984) was one of the celebrated art events of 2006. Drawn in part from materials which Richard Hell donated to the New York University Fales Library, the show brought together original cultural products, fashion, and artifacts (hand lettered signs, a crowbar, fundraising letters, and an old menu from Max’s Kansas City, to name a few items). It was colorful and hip and loud. And it traveled to three cities. It opened at the Grey Art Gallery and the Fales Library at New York University (January 10-April 1, 2006). From there it traveled to the Andy Warhol Museum in Pittsburgh (May 20-September 3, 2006). Finally, it closed at The Austin Museum of Art, in Austin, Texas (November 11, 2006-January 28, 2007). Recently, a related show, Sympathy for the Devil: Art and Rock and Roll Since 1967 opened at the Chicago Museum of Contemporary Art (Sept 29. 2007-Jan 6, 2008). While this show starts with the Velvet Underground, it devotes a large number of galleries to the downtown and No-Wave movements of the1975-1995 period.[2]

There’s a lot to be said about the way the Downtown show traveled—and I would recommend this exhibit as a case study for anyone working in Museum Studies. What concerns me in this column, however, is not the larger exhibition politics of the Downtown and Sympathy shows, but rather the way film and tv are presented in each. While films and tv programs were shown on monitors throughout the galleries in both Pittsburgh and Austin, the larger institutional role played by community access cable and independent film distribution was largely invisible (The distribution and exhibition practices of the art world were not similarly erased; in Pittsburgh, they were foregrounded).[3] In the catalogue, even specific television programs get short shrift, since they receive only brief mention within a larger essay on No-Wave Cinema.[4] At the Chicago Museum of Contemporary Art, attribution is more problematic. Individual videos are presented totally outside their institutional context. Information tags tell us the names of the pieces, the performers, and the artists who created the works, but give no information about where the pieces were originally shown.

In part, this erasure is a definable function of museum and “core art cinema institutions,” which—as Haidee Wasson points out—“have tended to pose themselves explicitly against commercial film [and tv] culture and formed around concepts of aesthetic distinctiveness.”[5] But the limited reference to exhibition and distribution masks the key role which television played for artists of this era. The Downtown Art Scene was one of the first alternative art movements to use tv in a concerted way, as a means both of showcasing work and of building community. The largely unpublicized late-night cable Downtown lineup included films, gallery tours, interview shows, news videos and public service announcements. The PSAs—often starring “celebrities” like Laurie Anderson and Kathy Acker—informed viewers about the burgeoning culture wars affecting grant funding, about police crackdowns, and about AIDS. The news videos were stranger. Throughout the period, artist-videographers took their cameras into the street and simply recorded what they saw there. Charles Ahearn’s Doing Time on Times Square (1991) and Rik Little’s The Church of Shooting Yourself (1993-present) are among the best known latecomers to this tradition. But throughout the 80s, frequently unattributed tapes would simply show up at a station; these often-jarring cinema-vérité/reality TV amalgams would play on Community Access. When people came home from their night jobs, they could tune in and see what had happened on the street while they were waiting tables. This was alternative media before the Net—a time when late night television was as surreal and real an experience as anyone could hope to have. 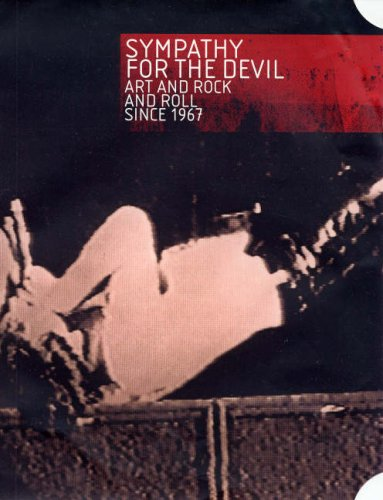 Sympathy for the Devil

Television was one of the principal means for disseminating art outside the immediate New York area. Community Access stations in the Midwest picked up tapes and public service packages which they aired in special Free Speech TV slots.
In the early 90s, I saw a lineup of PSAs and Craig Baldwin’s Sonic Outlaws (1995) on BCAT (Bloomington Community Access Television, Bloomington Indiana)—Channel 3 on my television dial. Through that transmission I discovered the Monday, Wednesday, Friday Video Club in New York, which distributed Downtown titles on poorly transferred VHS tapes. Through MWF, I was able to teach the things I had been watching during the eighties—when I lived on the West Coast—to my midwest students.[6] Given the institutional trajectory—independent production to community access cable to indie distribution to classroom use–one could argue that much of the niche-market for the Downtown Art Show was created, early on, by the artists themselves—through the savvy use of guerilla distribution and Community Access tv.

It is not my intention here to trash two shows which I enjoyed and which do a superb job of returning the Downtown Art scene to the cultural radar screen. But I do want to make a case for writing Cable Access Television and Independent Film Distribution back into Downtown history. As I have already noted, cable television played a key role in showcasing experimental works, and, by extension, in constructing the downtown scene itself. Not only did it chronicle downtown life and circulate needed information, but—as Gregg Bordowitz has noted in another context—it constituted an event “because its production…[was] part of a larger effort to organize increasing numbers of people to take action.” The Downtown Art Scene was perhaps the last historical movement which believed deeply that one could make a political difference simply by intervening in society’s spectacle. So every transmission, every tv show, every film played a double role of entertainment/education on the one hand and agit-prop on the other.[7] 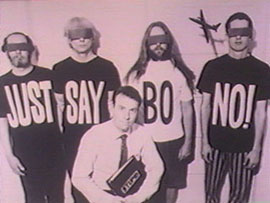 In addition, TV aesthetics played a crucial role in the look of Downtown Art. While shows like Willoughby Sharpe’s New York were shaped by what Raymond Williams might call a Downtown “structure of feeling,” they were also heavily influenced by the look of certain kinds of commercial TV. Segments frequently remind me less of formal Dada art and theater (to which they are frequently compared) than to the old Ernie Kovacs Show (1951-1956) or to Laugh-In (1968-1973). But this televisual effect extends beyond television and video works to some Downtown graphic pieces and publications as well. Downtown Art follows a longstanding avant-garde tradition of drawing heavily from popular culture, and the popular culture which Downtown Artists knew best was pop music, comic books, film and television.

Notes:
[1] The title of this article refers to the song “Burning Down the House,” which was initially released on the Talking Heads Speaking in Tongues LP (Sire Records1983).

[2] Downtown art refers to the movement roughly spanning 1974-1995 which took its name from the Lower East Side of New York City (“downtown”) where it was largely centered. Affiliated with punk music and the new raw trends of Suburban Ambush literature, the movement comprised people like Kathy Acker, Jean-Michel Basquiat, David Byrne, Karen Finley, Jenny Holzer and David Wojnarowitz.

[3] The Warhol Museum described alternative gallery exhibition against the context of the Loft Law (which made it legal for artists to live in SoHo’s industrial spaces) and the larger real estate politics of New York City.

[5] Haidee Wasson, Museum Movies: the Museum of Modern Art and the Birth of Art Cinema. Berkeley and Los Angeles: University of California Press, 2005. 6.

[6] The Monday, Wednesday, Friday Video Club has been transferring their titles to DVDs.
The webpage is http://www.brickhaus.com/amoore/MWFdoc1.html. Accessed 10.20.07.