Sports Commentary and the Problem of Television Knowledge

John Frankenheimer’s 1998 film, Ronin, contains a truly sublime moment that illustrates the raw power of athleticism as an audio/visual spectacle. In one narratively insignificant scene, the camera follows a figure skater, played by former Olympic champion Katarina Witt, as she rehearses her routine. Rachmaninoff plays over the empty stadium’s speakers as Witt gracefully strides and leaps across the ice. Audible above the music are the more jarring sounds of her skates grinding into the ice as she gathers energy for her next maneuver. The scene becomes a study in contrasts, and the cumulative effect is enthralling; the violent noise of Witt’s skates belying the smooth grace of her movements, the sights and sounds of an exceptional athlete engaged in the perfection of her sport.

I have watched, but never really been a fan of, figure skating on television, and was surprised by my attraction to this scene. What made it so compelling compared to its television counterpart, I later realized, was the conspicuous absence of the omnipresent sports commentators. Their overly-enthusiastic discourse on lutzes and Biellmanns, and their pontifications about how a particular jump was “sending a message” to the other competitors, drowned out the beauty of the skating with a flood of technical jargon. The film allowed me to experience the skater on her own terms while television insisted that I engage skating on the commentators’ terms. Obviously, sports commentary is not limited to figure skating; all televised sports exhibit similar tendencies for over-discussion. For example, no quarterback can complete a pass without the audience being told what kind of a pass it was by a former quarterback-turned-commentator who then analogizes the play to on from his own playing past. Watching sports on television is less about observing the athletic spectacle of graceful competition than it is witnessing the construction of a televisual compendium of sports knowledge for which the game is merely the backdrop.

Given the ubiquity of sports commentary on television, there must be some perceived purpose behind it. But what might that purpose be? More importantly, what does it say about television sports audiences and the regard in which they are held by television networks that no sporting activity can be conveyed to the public without commentary? Why are television audiences not allowed to experience televised sports with only the natural sounds of the event? Inquiring about the role of commentating in televised sports engages how television creates knowledge and situates audiences with respect to sports. What we find is that television sports commentary turns sports from a visceral spectacle into a technical oration, and for no discernible benefit.

The most generous view of television sports commentary suggests that its purpose is to provide otherwise inaccessible information to viewers in a timely manner so as to enhance their viewing experience. And commentary can and does fulfill this function. With research staff on hand and their own well of experience, television commentators can draw out those interesting bits of history and trivia that, at the right moment in a game, can both inform and entertain their audiences with explanations of obscure rulings or contextualizations of significant plays. But commentators are not held in reserve off-camera until this information is needed, they are thrust into the foreground and seemingly required to speak even when there isn’t really much to say. They are the vanguard of the over-verbalizing forces of modern television. But information dissemination is not the same as conveying understanding, and it is the difference between those two that generates the knowledge problematic for television.

Any quality assessment of information is subjective, but one needn’t be a cynic to question the instructional value of much of the sports commentary on television. John Madden’s teleprompter circles around and discussion of the sweat stains of defensive linemen may be amusing, but certainly stretch the consideration of what counts as sports commentary. Similarly, tennis commentator Mary Carillo’s extended stories about Roger Federer’s attendance at a New York fashion show, with which she regaled audiences during play at this year’s U.S. Open, certainly make it fair to question the information value of such details over more pertinent information about the actual play on the court. Even those who applaud these digressions admit that the commentators are known more for their personalities than for their ability to provide quality information to audiences (e.g., Maffei, 2006). But I’m not describing only those instances when commentary moves from the trivial to the tangential; too much substantive information can also distract the viewer by asking them to give more attention to the commentator than to what is being commented on. 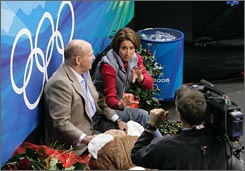 Mary Carillo at the mic

For those “in the know,” technical jargon indeed may be neither impenetrable nor detrimental to their viewing enjoyment, much in the same way that casual fans may appreciate Madden’s and Carillo’s meanderings through sensibility. But television is not a democratic but a tyrannical medium – we can only observe what it gives us. When the commentary is present, we must all accept it or mute it; there can be no in-between. The coverage interpellates the viewer as someone needing this data in order to enjoy the sporting event. Familiarity is rewarded, but not knowledge – the latter is claimed as the medium’s province. The audience is positioned as not being knowledgeable enough about the sport to enjoy it on its own terms or with only minimal informational assistance. Consequently, the commentary is a rhetoric of entertainment more than instruction. The unfortunate consequence of this assumption is that commentators believe that any factoid or story they convey – no matter its relation to what is taking place on the field of play – is of interest to the home viewer. Audiences have few means available for escaping or challenging their position in this dynamic. The forceful manner of the medium seldom creates an opportunity for audiences to assess this claim independent of the commentary and its self-established justification.

On a very few occasions, however, a different perspective has been available, and is helpful for situating sports commentary within the politics of the audience’s relationship to television. On December 20, 1980, NBC experimented with an “announcerless” broadcast of an NFL game between the New York Jets and the Miami Dolphins. Viewers at home heard only the natural sounds of the game, similar to what the fans in the stadium heard that night. The game earned respectable ratings, but the format was not continued because network executives considered it a “one-time gimmick” (Rubinstein, 2000). A quarter of a century later, following a media lockout by the Canadian Football League, several weeks worth of announcerless games were broadcast to fans, and their ratings were dramatically higher than games which featured commentary (“King Kaufman’s,” 2005). Fans, it would seem, are both capable of and willing to experience sports on television without the informational assistance of commentators or their anecdotes, and while these instances may be too few to support the claim that viewers prefer announcerless broadcasts, they do warrant additional thought along these lines.

If any event on television could be broadcast without worrying about the audience’s ability to understand and appreciate what they are seeing, relying on the audience’s existing level of familiarity with the concept, it certainly would be a sports event. And yet, sports are the most heavily commented events on television, to the point where it is not uncommon for there to be more commentators for an event than there are actual competitors on the field. If the explanation for this circumstance is that the audience need educating, then there are significant issues both with the quality of this education and the manner in which it is provided. Sports commentary on television, in its current form, is not simply too often distracting and trivial, its self-insistence is detrimental to fans’ ability to experience the events they have tuned in to watch. The technical knowledge hurled at television sports audiences shifts them from a position of being able to appreciate the athlete’s skills at the visceral level to a position where technical understanding is rewarded. Sports commentary as such is television’s vestigial organ, the unnecessary remnant that points out how the medium has not completely evolved into the modern media sphere. With the Internet in particular, the mythos of the uninformed audience is challenged. This is not to say that Internet audiences are smarter or better educated about the sports that they are watching, merely that they have access to a wealth of information and are far less reliant on commentators to provide it to them, as countless fan and media sites across the Web demonstrate. The realization needed here by networks is that, when it comes to sports, television is a medium of stimulation much more than it is a medium of information. Perhaps it would be best if television sports coverage were reshaped as a medium of appreciation, where the visceral impact of sport is conveyed more cleanly and directly. In the current media age, commentating is the province of audiences eager to make their own voices heard, not to simply listen to intermediaries who drift increasingly into shouting outrages in an attempt to garner attention and justify their airtime. Television should handle the transmission of the natural sites and sounds of the games and the commentary should be left to the fans to discover and generate for themselves.