Guy-Coms and the Hegemony of Juvenile Masculinity

This column was inspired by a comment at last year’s Flow Conference that television scholars tend to write about our own taste culture, rather than something like Everybody Loves Raymond. While I do discuss Raymond a little bit here, my main focus is what I call “guy-coms:” a handful of shows that debuted after Raymond’s but followed in his footsteps. These later series lack Raymond’s innovativeness and appeal among viewers earning more than $75,000. But guy-coms possess a reputation as “workhorse” series that consistently deliver respectable ratings and have come to dominate the domestic sitcom genre in the past decade. In 2003, seven of nineteen domestic comedies on the Big Four exhibited close adherence to guy-com aesthetics, including Yes, Dear; Still Standing; Everybody Loves Raymond; 8 Simple Rules; According to Jim; and Married to the Kellys. I want to suggest that guy-coms serve not only as the predominant form of domestic sitcom, but also help make juvenile masculinity hegemonic in U.S. culture. By “hegemonic masculinity,” I mean the process by which certain masculinities come to do the hard work of shoring up white male privilege. 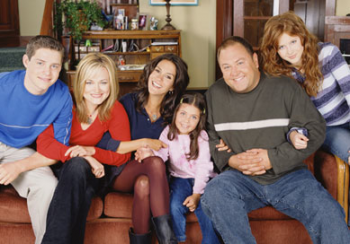 The “guy-com” subgenre features a “difficult” white male lead and a nuclear family with non-adult children. Each episode revolves around reconciling the man’s personality with the demands of family and marriage. Recently, the guy-com has also included recurrent characters in the extended family. The lead characters in guy-coms share fairly consistent gender traits. They work in occupations that demand physical rather than intellectual acumen, a fact often underscored by their fatness. They are self-centered, irresponsible, and casually sexist, prone to disrupting domestic harmony with their stubbornness. They are, in a word, juvenile. 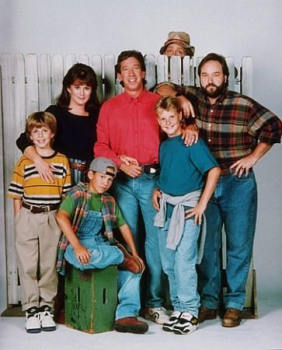 While domestic sitcoms have long included juvenile men, rarely have they been the genre’s main focus. But in the late eighties, for a variety of reasons, a trio of standard-setting guy-coms appeared: Major Dad, Coach, and Home Improvement. Featuring men with identifiable character defects (strictness, control issues, and childishness, respectively), these series split their action between the domestic space, where the men’s personalities clashed with the demands of family life, and the workplace where they were allowed free rein. The women in these guy-coms worked at jobs that paid better or required more intelligence than their husbands. At root, their message was that, while juvenile masculinity may be tolerable at work, it is disruptive at home. 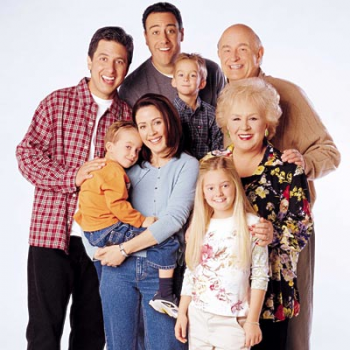 Cast of Everybody Loves Raymond

One of Raymond’s innovations was the replacement of the workplace with a second domestic setting, Raymond’s parent’s kitchen. No longer could juvenile masculinity escape to work, it was restricted by family on all sides. This new spatial structure restored some of the wedded bliss that earlier guy-coms had undermined: while Ray’s immaturity did cause marital problems, it usually surfaced because of his family-of-origin’s behavior. The narrative resolution of each episode pits the couple against the family-of-origin, reaffirming marital solidarity. Current guy-coms continue Raymond’s avoidance of the workplace.

The inclusion of recurrent male characters from the extended family who are more objectionable than the main characters leaves male leads as the only viable masculine performances. But main characters are also over-endowed with objectionable juvenile traits. This excessive immaturity offers male viewers a position of dominant specularity, where they can identify with the lead character’s attitudes, while distancing themselves from his more egregious character defects. A similar viewing position is constructed for women, who can see their own mates as less difficult than these men.

By bringing the extended family to the fore, Raymond pushed the nuclear family into the background. As Ray quips in the intro, “It’s not really about the kids.” The avoidance of issues of fatherhood, in particular, has an ambivalent ideological impact. On one hand, the influence of juvenile men on children is portrayed as foolhardy and destructive. On the other, the difficult accommodation between juvenile masculinity and fathering, which earlier guy-coms dramatized, disappears altogether, and is easy to ignore.

Characterization and humor do the primary work of portraying juvenile masculinity as superior to other forms of identity. In According to Jim, Jim is the only character who exhibits growth or depth, often at the end of an episode when he explains his behavior, thus balancing his immaturity with more endearing character traits. Likewise, Jim and his guy-coms counterparts are the only ones who generate what I would call exuberant self-mockery, which makes them both more fun and more self-aware than other characters. 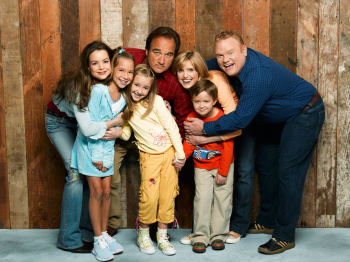 Cast of According to Jim

A couple of jokes from an episode entitled “The Grill” helps clarify the different forms of humor associated with Jim and other characters When the family’s two daughters walk into the kitchen wearing ballerina costumes, Jim’s sister-in-law, Dana, twirls around and kicks over a bowl of potato chips. Meanwhile in the backyard, Jim explains the finer points of grilling to 5-year-old Kyle. “Grill my army man,” Kyle exclaims. “Where?” asks Jim. “In the middle, where it’s hotter,” replies Kyle, reciting the grilling lesson he’s just heard. “That’s my boy,” Jim shouts, grabbing the army man with his tongs and placing it on the grill. While the gag with Dana evokes derisive laugher, arising from her refusal to perform an appropriate femininity for her age and surroundings, Jim’s grilling of the toy evokes a more exuberant laugher of recognition: while no one would want to be Dana in this scene, many male viewers might want to be Jim. In fact, much of Jim’s humor involves self-mocking irony of his juvenile attitudes and behavior. This awareness of one’s own faults and the capacity to laugh at them is denied other characters. In a postmodern world, where the production of a cool, detached self is vital to economic, political, and social success, self-irony is key, but in guy-coms, only juvenile men are capable of self-irony; the other characters take themselves too seriously.

The capacity for change, the appeal of the male leads, and their ability to laugh at themselves ultimately make white masculinity comes across as a superior way of being in the world. However, it is the networks’ attempts to retain white male viewers that underwrite this portrayal of hegemonic, juvenile masculinity. While men in the 1990s were still addressed as members of family audiences and early guy-coms included extensive interaction with the nuclear family, as family viewing has continued to decline, the guy-com relegated the nuclear family to a backdrop, and the networks focused more on attracting married viewing couples. Although, as we have seen, men are the center of these stories and remain in the ideological driver’s seat, women characters, especially wives, are portrayed as mature and level-headed, thus flattering both halves of the viewing couple. Moreover, redirecting the narrative conflict from the couple to the extended family fits with couple viewing more comfortably than earlier versions of the guy-com. 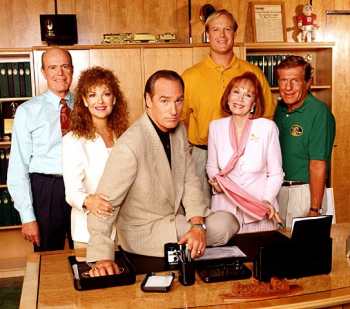 I would argue that guy-coms have becomes the standard form of domestic sitcom, the stylistic and ideological common sense of the television industry. However, the guy-com also signals the demise of the domestic sitcom altogether. Other generic forms are perhaps more effective in appealing to today’s lower middle-class white viewing couples, such as competitive reality shows like Dancing with the Stars or prime-time game shows like Are You Smarter than a Fifth Grader? In 2007-2008, only two domestic sitcoms are on the schedules of the Big Four: Two and a Half Men and According to Jim, which barely got renewed. It may be more accurate, then, to say that guy-coms set the standard for the domestic sitcom in its final years. Ironically, a genre that began its life as a way to integrate women into gender identities that fit the demands of a booming postwar U.S. economy may be ending its life by helping white men rebel against the demands of a volatile global economy at the dawn of the 21st century.

4. According to Jim cast