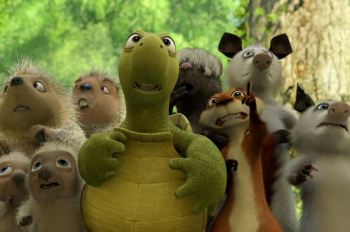 In contemporary animated feature films for kids, a genre I call “pixarvolt” — meaning animated movies depending upon pixar technologies of animation rather than standard linear animation and foregrounding the themes of revolution and transformation — certain topics which would never ever appear in adult films are central to the success and emotional impact of the narrative. The Pixarvolt films proceed by way of fairly conventional narratives about individual struggle, but they use the individual character only as a gateway to intricate stories of collective action, anti-capitalist critique, group bonding and alternative imaginings of community, space, embodiment and responsibility.

In the one recent film, Over The Hedge by Dreamworks, just for example, the film stages a dramatic stand off between some woodland creatures and their new junk food consuming, pollution spewing, SUV driving, trash producing, water wasting, anti-environmentalist human neighbors. As the creatures awake from their winter hibernation, they discover that while they were sleeping, a soulless suburban development stole their woodland space and the humans have erected a huge partition or hedge to fence them out. The creatures, raccoons and squirrels, porcupines and skunks, turtles and bears, band together in a cross-species alliance to destroy the colonizers, tear down the partition and to upend the suburbanites depiction of them as “vermin.” We only see the humans through the eyes of the woodland creatures and, as in countless other animated features, the humans look empty, lifeless and inert – in fact, unanimated. Over The Hedge (OTH) like other films in the Pixarvolt genre makes animation itself into a feature of kinetic political action rather than just an elaborate form of puppetry. The human and non-human then are featured as animated and unanimated rather than real and constructed or subjects and objects. The band of creatures in OTH make up a complex compendium of the non-human and they even feature a Hegelian possum who plays dead when in danger and explains to his daughter wisely: “Playing possum is what we do. We die so we may live!” Ultimately, this children’s feature offers more in the way of a vision of collective action than most independent films and critical theory put together and the film’s conclusion points to queer alliance, queer space and queer temporalities as the answers to the grim inevitability of reproductive futurity and suburban domesticity.

A short list of films that I would feature in my pixavolt genre would include: Finding Nemo, Shrek 1 and 2, Chicken Run, Babe, Wallace and Gromit, Spongebob Squarepants, Monsters Inc. and Over the Hedge. It would not include The Incredibles, Toy Story, Madagascar or Chicken Little. In the Pixavolt flicks, animated animals or odd animated human-like subjects, like Spongebob, or animated animals like Gromit who live with animated humans like Wallace, all transform our understanding of relationality, morality and social change by inhabiting worlds where common sense leads not to home-owning, or family values, or individualistic aspiration but rather the Pixavolt world is comprised of a strangely radical combination of socialist and anarchist notions mixed with odd translations of ‘animal values.’ The chickens in Chicken Run, a matriarchal group for the most part, recognize that they are not only the labor on the Tweedy farm but soon to be the product; the fish in Finding Nemo understand that the dangers of the deep are less the sharks than the fishermen; Spongebob and his buddy Patrick take on the greedy entrepreneur on the ocean’s bed; the monstrous and pathetic rejected fairytale characters in Shrek form a refugee camp outside Shrek’s swamp and so on. 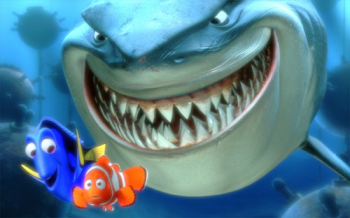 Not all animated features fit the Pixarvolt bill. And so a film like The Incredibles builds its story around the supposedly heroic pathos of male mid-life crisis and invests in an Ayn Randian or scientologist notion of the special people who must not suppress their difference in order to fit in with the drab masses; the very recently released Happy Feet, similarly casts its lot in with individualism and makes a heroic figure out of the dancing penguin who cannot fit in with his sick-making, sentimentalist, heart song singing community…at first. Eventually, of course, the community expands to incorporate him but they, sadly, learn valuable lessons along the way about the importance of every single one of the rather uniform penguins learning to “be themselves.” Of course, if the penguins really were being “themselves,” that is penguins, they would not be singing Earth Wind and Fire songs in blackface as they do in the movie, and searching for soul mates, they would be making odd squawking noises and settling down for one year with one mate and then moving on! 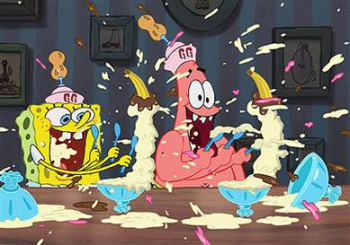 In Over The Hedge, and other Pixavolts, desire for difference is not connected to a neo-liberal “be yourself” mentality or to special individualism for “incredible” people, rather, the Pixarvolt films connect individualism to selfishness, to untrammeled consumption and they oppose it with a collective mentality. Two thematics can transform a potential Pixarvolt film into a tame and conventional cartoon: family and romance. The Pixavolt films, unlike their un-revolting conventional animation counterparts, seem to know that their main audience is children and they seem to also know that children do not invest in the same things that adults invest in: children are not coupled, they are not romantic, they do not have a religious morality, they are not afraid of death, they are collective creatures, they are in a constant state of rebellion against their parents and they are not the masters of their domain. Children stumble, bumble, fail, fall, hurt; they are mired in difference, not in control of their bodies, not in charge of their lives and they live according to schedules not of their own making. The Pixavolt films offer the child an animated world of triumph for the little guys, a revolution against the business world of the father and the domestic sphere of the mother – in fact, very often, the mother is simply dead and the father is enfeebled (as in Robots, Monsters Inc., Finding Nemo, and Over The Hedge). Gender in these films is shifty and ambiguous (transsexual fish in Finding Nemo, other-species-identified pig in Babe); sexualities are amorphous and polymorphous (the homoerotics of Spongebob and Patrick’s relationship and of Wallace and Gromit’s domesticity); class is clearly marked in terms of labor and species diversity and bodily ability is quite often at issue (Nemo’s small fin, Shrek’s giganticism). While recent animations tend to be all too unrevolting (see aforementioned Happy Feet but also Flushed Away), the genre itself seems to have made a commitment to the quirky, the rebellious and the queer and while Happy Feet danced the new penguin chic all the way to the bank, perhaps there’s another grim and less cheery animation in the making, one where dancing penguins give way to more of the unsettling and perverse animal narratives that we have come to love and trust.