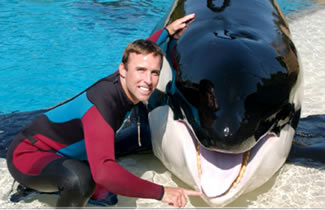 A Trainer with his Student

Every Sunday when my New York Times arrives, I tell myself that this week I will not read the column that always, but always drives me crazy. I read the whole newspaper making a careful detour around the Style section but then, every week, having promised myself not to, I turn to the hideous weekly commentary on “Modern Love.” This column records the ups and downs, the byroads and hidden paths of contemporary romance for urban, mostly white, mostly heterosexual men and women. Time after time, a young or middle-aged writer/lawyer/doctor/researcher will write about a recent experience with a spouse/partner/girl-friend/boy-friend/ex that shakes the writer’s faith in modern love but that ultimately confirms the rightness, the unmitigated decency, the oh-so human foibles of hetero intimacy. A boyfriend may be arrogant, self-centered, ungenerous; a husband might stray, pray or be gay; a girlfriend may be too critical, too self-deprecating, castrating; a wife may ail, fail or assail. But at the end of the day, the irresistible course of true love flows directly from trouble and confusion to understanding, new found depths of connection, marriage, kids and wholly unsurprising forms of family.

In recent weeks then, a hetero male has told of the girlfriend who tried to make him hipper by shopping with him; a second marriage in which the second husband is haunted by the first; a former wife coming to terms with her former husband’s homosexuality; a straight woman who falls in love with a gay man; a heartbroken straight woman who learns a lesson in modern love from her plumber, and so on. Week after week the disappointments, the regrets, the conflicts are countered by the unexpected surprises, the joy, the depth of commitment that rewards those who wait and believe and invest in the fantasy of modern, heterosexual love. This is a triumphant narrative, a heroic narrative, and it is one completely at odds with the harsh realities of today’s world of divorce and separation. The column, in short, is propaganda for heteronormativity. Let’s see how this works.

In one of the most popular ever of the “Modern Love” columns, “What Shamu Taught Me About A Happy Marriage,” Amy Sutherland describes how she adapted animal training techniques that she had learned at Sea World for use at home on her husband. As I said, while the “Modern Love” column purports to offer a location for the diverse musings of postmodern lovers on the peculiarities of modern love, it is actually a primer for adult heterosexuality. Occasionally, a gay man or a lesbian will write about his or her normative liaison, its ups and downs, and will plea for the right to become “mature” through marriage, but mostly the column is dedicated to detailing, in mundane and banal intricacy, the roller-coaster ride of bourgeois heterosexuality and its supposed infinite variety and elasticity. The typical “Modern Love” article will begin with a complaint, usually and predictably a female complaint about male implacability, but as we approach the end of the piece, resolution will fall from the sky in the manner of a divine vision, and the disgruntled partner will quickly see that the very thing that she found irritating about her partner is also the very thing that makes him…well, him! That is, unique, flawed, human and lovable.

Sutherland’s essay is true to form and after complaints about her beloved husband’s execrable domestic habits, she settles upon a series of training techniques for him by placing him within a male taxonomy:

“The exotic animal known as Scott is a loner, but an alpha male. So hierarchy matters, but being in a group doesn’t so much. He has the balance of a gymnast, but moves slowly, especially when getting dressed. Skiing comes naturally, but being on time does not. He’s an omnivore, and what a trainer would call food-driven.”i

The resolution of the problem of “Scott” in this instance depends upon the hilarious scenario within which Sutherland brings her animal training techniques home and puts them to work on her recalcitrant mate. Using methods that are effective on exotic animals, Sutherland manages her husband with techniques ranging from a reward system for good behavior to a studied indifference to bad behavior. Amazingly, the techniques work and, what’s more, she learns along the way that not only is she training her husband, but her husband, being not only adaptable and malleable but also intelligent and capable of learning, has started to use animal training techniques right back on his wife. Modern marriage, the essay concludes in line with the “modern love” ideology, is an exercise in simultaneous evolution with each mate adjusting slightly to the quirks and foibles of the other, never blaming the structure, trying not to turn on each other and ultimately triumphing by staying together no matter what the cost.

Amusing as Sutherland’s article may be, it is also a stunning example of how, as Laura Kipnis puts it in Against Love, we maneuver around “the large, festering contradictions at the epicenter of love in our time.” And as Kipnis’s book argues, we tend to blame each other or ourselves for the failures of the social structures we inhabit rather than critiquing the structures (like marriage) themselves. Indeed, so committed are we to these cumbersome structures and so lazy are we about coming up with alternatives to them that we bolster our sense of the rightness of heteronormative coupledom by drawing on animal narratives in order to place ourselves back in some primal and “natural” world. Sutherland, for example, happily casts herself and Scott as exotic animals in a world of exotic animals and their trainers; of course, the very idea of the “exotic,” as we know from all kinds of postcolonial theories of tourism and orientalism, depends upon an increasingly outdated notion of the domestic, the familiar and the known, all of which come into being by positing a relation to the foreign, the alien and the indecipherable. Not only does Sutherland domesticate the fabulous variation of the animals she is studying by making common cause with them, she also exoticizes the all too banal setting of her own domestic dramas and in the process, she reimposes the boundary between the human and non-human. 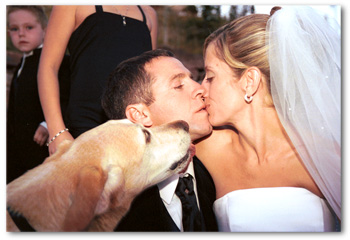 A Family Shares a Kiss

The essay as a whole contributes to the ongoing manic project of the re-naturalization of heterosexuality and the stabilization of relations between men and women. And yet, Sutherland’s piece, humor and all, for all of its commitments to the human, remains in a creative debt to the intellectually imaginative work by Donna Haraway in Primate Visions; Haraway, of course, reversed the relations of looking between primatologists and the animals they studied and reminded us that, first, the primates look back and second, that the stories we tell are much more about humans than animals. She wrote: “Especially western people produce stories about primates while simultaneously telling stories about the relations of nature and culture, animal and human, body and mind, origin and future.”ii Similarly, people who write in the “Modern Love” column for the NYT, these vernacular anthropologists of romance, produce stories about animals in order to locate heterosexuality in its supposedly natural setting. And in Sutherland’s essay, the casting of women and men in the role of trainer and animals also refers indirectly to Haraway’s reconceptualization of the relationship between humans and dogs in her Companion Species Manifesto.iii While the earlier cyborg manifesto had productively questioned the centrality of the notion of a soft and bodily, anti-technological “womanhood” to an idealized construction of the human, the later manifesto decentralizes the human altogether in its account of the relationship between dogs and humans – and refuses to accept the common wisdom about the dog-human relationship. For Haraway, the dog is not a representation of something about the human but an equal player in the drama of evolution and a site of “significant otherness.” The problem with Haraway’s vivid and original rewriting of the evolutionary process from the perspective of the dog is that it seems to reinvest in the idea of nature per se and leaves certain myths about evolution itself intact.

In fact, Donna Haraway herself seems to be invested in the “modern love” paradigm of seeing animals as either extensions of humans or as their moral superiors. As Heidi J. Nast comments in a polemical call for “critical pet studies,” a new disposition towards “pet love” has largely gone unnoticed in social theory and “where pet lives are addressed directly, most studies shun a critical international perspective, instead charting the cultural histories of pet-human relationships or, like Haraway, showing how true pet love might invoke a superior ethical stance.” iv Nast proposes that we examine the investments we are making in pets and in a pet industry in the twenty first century and she calls for a “scholarly geographical elaboration” of who owns pets and where they live and what kinds of affective and financial investments they have made in pet love and finally who lies outside the orbit of pet love. As she remarks: “Those with no affinity for pets or those who are afraid of them are today deemed social or psychological misfits and cranks, while those who love them are situated as morally and even spiritually superior, such judgments having become hegemonic in the last two decades” (896). Like adults who choose not to reproduce, people with no interest in pets occupy a very specific spot in contemporary sexual hierarchies. In her anatomy of pet love, Nast asks “why, for example, are women and queers such central purveyors of the language and institutions of pet love? And why are the most commodified forms of pet love and the most organized pets-rights movements emanating primarily out of elite (and in the US, Canada and Europe) “white” contexts?” (898). Nast’s account of pet love indeed registers the need for new graphs and pyramids of sexual oppression and privilege, new models to replace the ones Gayle Rubin produced nearly two decades ago in “Thinking Sex” to complicate the relations between heterosexual privilege and gay oppression. In a post-industrial landscape where the size of white families has plummeted, where the nuclear family itself has become something of an anachronism, where a majority of women live outside of conventional marriages, the elevation of pets to the status of love objects certainly demands attention. In a recent song by radical rapper, Common, he asks: “Why white folks focus on dogs and yoga?/ While people on the low end tryin to ball and get over”? Why indeed…it’s all for modern love.

Notes
i Amy Sutherland, “What Shamu Taught Me About A Happy Marriage,” “Modern Love” Column in The New York Times, Sunday June 25, 2006.