Who Are Wii? The Study of Console Fandom 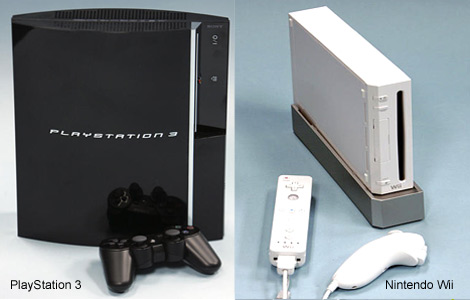 Two of my favorite YouTube videos from the past year depict the destruction (by sledgehammer) of two newly-purchased popular video gaming consoles: the Playstation 3 (PS3) and the Nintendo Wii. Though the statement on the sledgehammer-wielding provocateurs' website states that the acts of destruction were intended as nothing more than entertainment for those who hate said consoles, they raise questions familiar to any fan studies scholar. Why do these objects mean so much to so many? Is console fandom something like other forms of media fandom? Is it akin to brand fandom, or something more like people's love/hate relationship with televisions?

One rather obvious antecedent to console zealotry is the Apple cult. In part, this is a cult of personality. If you believe Steve Jobs is particularly innovative, then you're more inclined to become an Apple adherent. I doubt that anyone bought a PS3 based on their adoration of Howard Stringer, and I doubt even more that most Wii owners have heard the name Satoru Iwata before. Its possible that Apple fans are loyal only to innovation itself, in which case they would abandon a well-established company in favor of a down-on-their-luck underdog like Nintendo. These consumers sense that underperforming companies have less to lose by doing something completely new, and the Nintendo Wii's new movement-based interface reinforces this belief. 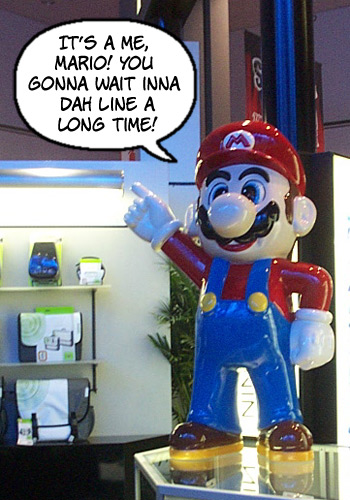 All varieties of brand fandom are based on the images of the brand and the community around the brand [i]. The popular press certainly played a role in establishing the images of a goliath Sony and a back-from-the-dead Nintendo, reveling in the unexpectedly high sales of the Wii over the holiday season. We also might consider the differences between the two news stories linking both the PS3 and the Wii to fan deaths: a PS3 fan was shot outside of a store and robbed of his console (sadism), while a Wii fan hydrated herself to death in an attempt to win a console on a radio talk show (masochism).

We must also take into account the images promulgated by expensive ad campaigns launched by manufacturers. The more “value neutral” a consumer good is, the more it seems to cry out for advertising that explicitly associates the object with a certain set of values, one that does all the semiotic heavy lifting for us (for an example of this, check out this recent Chevy truck ad). The Chris-Cunningham-esque PS3 spots depict the de rigeur blank white space inhabited by a creepy baby doll and a sentient machine – no clips of the games necessary. The Wii's first ads show a couple of Asian men driving across the countryside in a tiny car playing Johnny Appleseed, bestowing superior Japanese technology upon American families that look strikingly similar to those featured in Atari's first ads 25 years ago. The problem is that the physicality of the Wii interface renders this kind of advertising inadequate. To know how great (or lousy) the Wii is, you need to use it, which may account for the proselytistic claims of Wii fans: “you NEED to play this!” 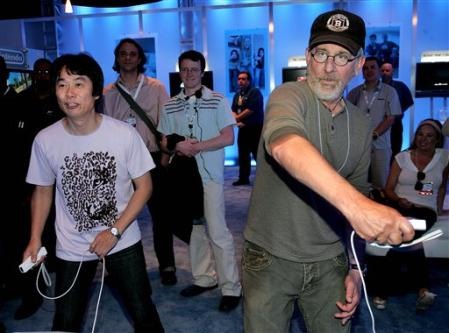 This brings me to a point of differentiation between console fandom and traditional media fandom: functionality. In addition to critiquing the iconography and narratives of video games, popular gaming criticism has long taken into account the various types and levels of interaction allowed by each game, typically referring to these attributes as “gameplay” or “playability”[ii]. With the advent (or perhaps the perfection) of a movement-detecting interface, the differences in gameplay now extend beyond the games to the consoles themselves. Might then a gamer be a fan (or anti-fan) of a particular mode of interaction: say, swinging a controller as if it were a sword? Granted, there's the “won't I look like a dork” factor that is sure to turn off many image-conscious teens, but I think that the fan culture surrounding the Wii may be an indication of a more fundamental link between functionality and fandom.

Until recently, the prohibitively high cost of game development has prevented developers from trying out new modes of gameplay on consumers. The same barrier to innovation is more evident at the console level, as these machines take years and billions of dollars to develop. As the cost of development continues to fall, game designers are beginning to explore the infinite array of modes of user-avatar interaction that the medium allows for. Each mode of interaction is no more inherently superior to another than each genre of film or each television series are to their counterparts. 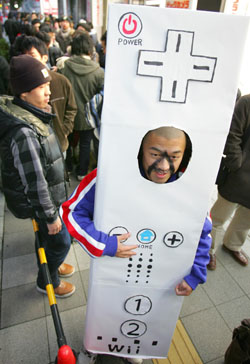 Our minds work in different ways: some people are particularly good at puzzles, others are better at time-sensitive precision activities like car racing. These differences in cognitive traits and their influence on gaming abilities have been explored in studies of gender and gaming. Such studies are only relevant as long as we conceive of “gaming” as a monolithic activity, when in truth it is becoming more varied each year. The proliferation of new modes of interaction will allow everyone to find their favorite type of game. In order to ensure a heterogeneous gaming universe, we cannot dismiss certain modes as obsolete (as is the custom in all matters technological). Each console, like each game or each TV show, will have its fans.

[ii]Indeed, the role of popular gaming criticism in establishing fanbases is worth considering. Does the New York Times' damning review of the PS3 do anything to the console's sales figures?