Could You Feel Like They Feel?: Music Games, Listening and Fantasies of Identification
Tim Anderson / Denison University

If there was a way that you could accurately measure the most popular form of adolescent pop fantasy, I would bet dollar to donut that the one where you dress up, mimic stage moves and strum your air instrument of choice in rhythm with your favorite song and performer would win nine times out of ten. From the Kiss Army to Madonna Wannabes, from Goth Kids to Fantasia fanatics to the members of “Clay Nation,” pick your singer, your band, your genre or your subgenre of choice and remember that while style counts, rhythm is everything. It’s as much the law of the living room (while your parents are gone, of course) as it is the dance floor. The firm belief that you are something and can become ANYTHING other than your brothers, sisters, mom and dad is part of what bobbing your head and looking the fool is about. The other aspect is that it is so damn fun. 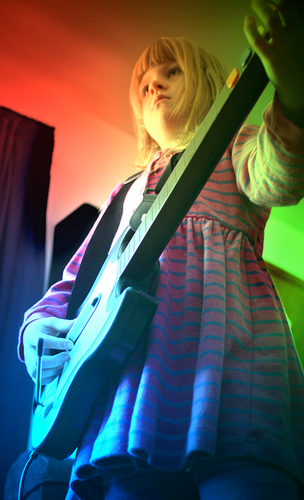 That desire for the “fantastic becoming(s)” of adolescence is all I could think about as I read the following passage from last issue’s article by Suzanne Freyjadis-Chuberka:

I’m standing on stage holding my guitar, it is a red Gibson and I have bright red hair and I’m wearing a punk ensemble. I’m playing the Foo Fighters’ “Monkey Wrench” and I ROCK! All the while I am standing in my living room using a guitar game controller that is allowing me to live out a fantasy of my rocker chick potential. In reality I would have no hope in hell of getting past one chord of anything on a guitar, but through the miracle of gaming I can inhabit many characters and be the rocker chick of my dreams.

Freyjadis-Chuberka’s use of the word “dreams” is interesting given her interest in the game, and other music-based video games, as immersive. The dream, that psychic state where fantasy and the concerns of conscious reality intermingle in the immersive atmosphere of an unconscious, is a state many of us seek in those few openings of waking life. In getting lost in that movie or night at the club we look for and, hopefully, find moments to observe, identify and fantasize that yield opportunities ripe for critique, celebration and wonder about others and who you could “become” at that very moment.

For Freyjadis-Chuberka the key to Guitar Hero and other music games is the issue of immersion:

There have recently been some games that have created openings for the traditional “non-game players” to experience video games in a way that feels immersive and fits their lifestyle. Guitar Hero, along with SingStar, Karaoke Revolution, and other games that use an alternative controller, have opened the doors of video gaming beyond the group of core gamers. These games have brought additional players to the video game arena through curiosity, and they have maintained these players through highly immersive game play.

Certainly this somewhat parallels my experience with the two games that have captured my heart in the past three months. Both Elite Beat Agents and Guitar Hero II are not only built on the logic of pop songs, but a deliberate, rhythmic interaction that is so compelling that somehow the term immersive doesn’t come close to adequately describing. Immersive, for me at least, suggests an initial act where a subject plunges him or herself into a specific environment only to have the environment take over and sensory input becomes passive. I’m not here to take the writer to task. Rather I would suggest that what is going here is that these games demand an engagement of the listening process, a process that is the key to the possibility of intersubjective communion. In the case of listening to music this process is intensely pleasurable. In his popular book, This is Your Brain on Music: The Science of a Human Obsession, Daniel Levitin makes a compelling case for the benefits of understanding the work neurologists have made to better understand why listening to music can be so pleasurably captivating:

Music listening requires, according to the theorist Eugene Narmour, that we be able to hold in memory a knowledge of those notes that have just gone by, alongside a knoweldge of all other musics we are familiar with that approximate the style of what we’re listening to now. This latter memory may not have the same or the same amount of vividness as notes we’ve just heard, but it is necessary to establish the context for the notes we’re hearing. (115)

In other words, this operational logic, combined with what Levitin calls “musical schemas” for listening, viscerally engage the player. Where these schemas come from and how they are developed are clearly cultural questions, a fact that Levitin readily acknowledges (114). Indeed, these cultural schemas, to paraphrase Simon Frith, are developed by learning what to listen to and, therefore, learn what is “valuable” in a piece of music. And when this schema is in place all you need to do is listen you can quickly sense valued music. Frith further states that, “the word I would emphasize here is ‘feel.’; Nobody needs to be told what is good or bad music — you know it the moment you hear it” (57).

And this is where that immensely pleasurable feeling of “immersion” once again comes to the fore. Reflect on any good to great night on a dance floor and it becomes clear that the experience feels particularly immersive because the particular type of attention that dancing demands is a form of listening where the one must actively submit to another aesthetic regime part of which you want to become yourself. “The relationship of ‘listening’ to music and ‘moving’; to music is, in short, a matter of convention,” notes Frith (220). In this sense, “Dance is not simply a heightened or more intense form of movement… rather, it is movement which draws attention to itself, in the very act of ceding control to the music–this is the difference between a movement that coincides with a beat and a movement that submits to it (221). And this is where, in my opinion, the appeal of these music games exist. Because they engage both a particularly important set of cultural processes that arrange an intensely pleasurable neural network, the issue of play is heightened while the ludic potential of instersubjective aesthetic activities highlighted at the same time. As Alex Rigopulos, President and CEO of Harmonix Games (the developer of Karaoke Revolution, Guitar Hero and Guitar Hero II), notes in a interview in the March 2007 issue of Game Informer

When we started the company, we weren’t thinking about video games at all. We considered ourselves an interactive music company. We wanted to solve the problem that we felt needed solving in the world. Making and playing music is this profoundly joyful experience. Tragically, very few people ever get access to that pleasure that comes from music making. Just about everybody tries that some point in their life, whether that’s piano lessons as a kid or guitar as a teen. But almost all those people quit after six months because it’s just too damn hard. We felt that we needed to invent new ways to let people who are not musicians have access to that very unique pleasure that comes from music making. (Anon. 38)

Indeed, the reason these games are so appealing is that they when they are good they efficiently provide an experience where one is “in communion” with the song that one is playing. Interestingly enough it is this experience what one feels as a musician when you are playing at the height of your ability within an ensemble and/or in the presence of an enthusiastic audience. The listening that one engages in these games demands that one becomes acutely performative in order to effectively recognize another affective/aesthetic domain. For example, in the time I have spent playing any of the Guitar Hero games I have experienced two surprising and enjoyable such listening experiences. The first is one where I play a song I once really liked as a youth but had subsequently left behind as something for which I no longer cared. In this case the song was “YYZ” by Rush and the experience of re-learning and “playing” the song was shocking as, over a few hours, the song went from a past novelty to a piece that flooded my entire body with a sense of delight that had either been dulled or forgotten some where in the time that I had moved from 13 year old “Hard Rocker” to 14 year old “Punk Rocker.” The second surprise came from song or an artist that I never considered interesting, let along engaging, would somehow open itself up in one revelation after another. Songs I loathe such as Chicago’s insipid “You’re My Inspiration.” In other cases I had simply ignored songs such as The Allman Brothers’; “Jessica” with all of its southern hippy beauty. Time and time again songs I didn’t know or appreciate would open themselves up to me because I was forced to listen to them in order to succeed. To paraphrase Peter Frampton, by playing games like Guitar Hero, Elite Beat Agents and Donkey Konga, I began to consider that I must have somewhat “felt” how fans and musicians must “feel” when they enjoyed these songs.

Of course, it could be that I am buying into a myth of sorts about music being some sort of “universal language” and, trust me, I am in know way equating and my experiences with somehow fully “understanding” those other musicians and fans. But the experiences have certainly made me much more curious than even I, a lifelong pop music addict, was before. As a result these games have effectively made me a little less “knee jerk” and little more open to finding what other’s value in their popular rhythms and melodies. As if in a dream, when I am sucked into these games I somehow relax myself enough to find associations and affections that I had not searched for earlier. And that has to count for something since there was no way in hell you were going to get me to listen that closely to “You’re My Inspiration” before.