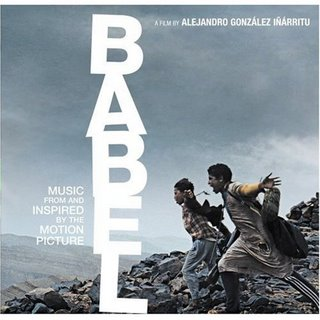 I don't really want to see Babel. I wasn't terribly interested when I saw the trailer a few months ago, my friends didn't like it, and the critics that I trust were split on it. I would rather watch any of the DVDs received through the mail that have stacked up in the past week or so, or the new Almodóvar picture. But Babel recently won the Golden Globe and was nominated for a bunch of Oscars including Best Picture; does this mean anything?

I exaggerate a bit. Somewhere in my teenage years I realized that many of the films (or TV shows, records, etc.) that I value typically do not win awards from America's critical or industrial groups; often they aren't even nominated. Still, for as much distance as I try to keep from the judgments of the AMPAS and other such organizations, I'm interested in the influential effects of award season on personal and collective taste. I experience this mostly in terms of the film industry, so please forgive me if I tend to use film-centric references, but really, this is about the general functions of awards and why I can't help but consider them.

To begin, they're still everywhere. Although entertainment and business analysts are quick to report that the Nielsen ratings for awards ceremony telecasts have dwindled in recent years (epitomized by the thumping of the 2006 Grammys by “American Idol”), they still remain boosts for the networks on which they air. More importantly though, the amount of attention and privilege given to award ceremonies by entertainment television, the press and the blogosphere contribute to an inescapable chainsaw-like buzz surrounding the awards.

Certainly we all know the routine: Who or what will win? Who got snubbed? What was the biggest surprise? How much money did distributors throw toward last minute ad campaigns? What “trends” or voting mechanisms influenced the decisions? What kind of “antics” will Jack Nicholson be up to this year at the Oscars? Journalists and bloggers espouse several theories and frustrations of why a film gets nominated and how a nomination from one organization will affect the rest. I made no effort to tune in to this year's Golden Globes, yet feel confident that I could regurgitate the nominees, winners and other “issues” of this year's ceremony accurately enough to win money on a quiz show.

It seems that everyone is out to promote the entertainment industries, including the industries themselves. Hollywood's acknowledgement of its artistic achievements also acts as self promotion and these coveted awards often become marketing tools that contribute to commercial success. Prestige from such validation by an industry extends the “legs” of a film via revamped ad campaigns, secondary runs, and wider release schedules. The benefits for individual winners extend even longer as they are christened “Oscar Winner” or other equivalents. 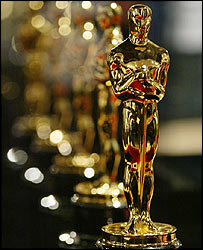 Where does the extension end? In the case of Oscar, a winner joins a historical list, coming up on 79 years long, of recognized films. In constructing historiographies, where do awards fit? Do awarded films, TV shows, etc. remain landmarks and examples of popular taste? Individually we may discredit awards of any kind, but do they retain value when considering popular taste?

As a reader and editor of FLOW, I am interested in some more of these questions:
How do you react to awards?
Are awards useful or misleading for historical research?
Does the relationship differ for other media?
How do industrial differences from, say, film to television affect how we perceive the awards themselves?

Our own FLOW Critics' Poll generated fruitful discussion of our collective and individual TV tastes as scholars. I'm asking our community to reprise aspects of that discussion in the context of a kind of “decorated canon” formed by industrial and critical groups.