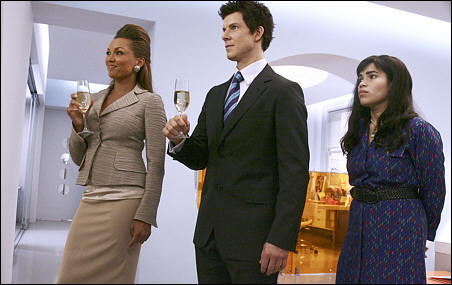 The set of Ugly Betty

UK's Channel 4 pinned its ratings hopes on latest US import Ugly Betty. The show delivered; and when it first aired on Friday 5 January 2007 4.5million people tuned in. It may not have been the massive 16.3million viewers enjoyed in the States; but for a channel suffering a ratings slump after the departure of Friends, Frasier and Sex and the City it was good news. We must, however, wait to see if the latest sharp-edged American import will help the minority terrestrial channel woo back its young, hip and predominantly female audience that once flocked to watch Carrie Bradshaw looking fabulous in vintage as she navigated the Manhattan dating scene.

Yet this is no simple Imperialistic tale of a transatlantic trade in programmes from the US to Britain. Instead the stylish US hit comedy Ugly Betty is the latest incarnation of a truly global phenomenon that started life as a Colombian telenovela back in 1999. The ugly duckling has since migrated to Mexico and Russia, from Germany to Israel; and recently landed in Greece and Spain. So what does the Ugly Betty phenomenon have to say about the international circulation of TV fictions as the locally produced Latin American telenovela is sold to, and/or re-made for and within, different national contexts? What does it tell us about the tensions between the commercial demands of multi-media conglomerates pursuing international ambitions, the regulatory forces of national broadcasters struggling in competitive markets, and the known preference audiences have for local TV fare? And what is more, has the global exporting of the ugly duckling tale led to a branded homogenisation of cultural storytelling and audience experience, obliterating the local and threatening indigenous cultural representation?

Ugly Betty is in fact the ninth production. Yo soy Betty, la fea/ I am Betty, the Ugly One (1999-2001), produced by RCN (Radio Cadena Nacional), which reaches approximately 97 percent of the Colombian population, became a national obsession. Viewers tuned into the five-episodes-a-week to follow the smart but less than attractive Beatriz Pinzón Solano (Ana María Orozco) climbing the corporate ladder, becoming an executive and marrying her boss. So popular was it in other Latin American countries that the ratings in March 2001 were higher in Ecuador (58.9 audience share) and Panama (56.5) than its native Colombia (50.7) with Venezuela trailing with “only” a 41.5 percent share. And when the finale screened in May 2001 more than 80million people in this region along with the US tuned in. Dubbed for export, it has been broadcast in Mexico and Brazil, Hungary, the Czech Republic, Italy, Turkey, Malaysia and Japan. Its enormous popularity has led to several international remakes:
in Mexico as El amor no es como lo pintan/ Love Is Not As They Paint It (TV Azteca, 2000) and later as the glossy La fea más bella/ The Prettiest Ugly Girl (Televisa, 2005); in India as the hugely popular Jassi Jaissi Koi Nahin/ Nobody is Like Jassi (SET, 2003); in Germany as the phenomenal hit Verliebt in Berlin/ Falling in Love in Berlin (Sat1, 2005); in Israel as Esti Ha'mechoeret/Ugly Esti (SET, 2003); in Russia as the much-watched Esti Ne rodis'krasivoy/ Be Not Born Beautiful (STS, 2005); in the Netherlands as Lotte (Talpa, 2006); in Spain as the aptly titled Yo soy Bea/I am Bea (Telecinco, 2006) (Bea rhymes with fea which means ugly); and its newest incarnation in Greece as Mαρία η άσγημη/Maria, The Ugly (Mega Channel, 2007). 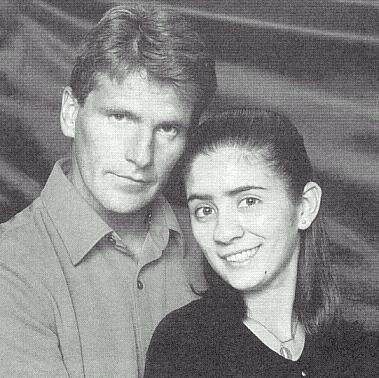 What intrigues us is how the format of the series is used and/or adapted as it moves from one (national) broadcasting context to another. One finds that this traffic is not one way but instead becomes entangled in a “complex connectivity” (Tomlinson 2004: 26) involving the spread of a globalised media, regulated local markets, and agencies giving representation to cultural identities (gendered, ethnic, national, etc.). Yo soy Betty, la fea, for example, screened initially in the States on the Spanish-language broadcast and cable channel Telemundo, owned by NBC since late 2001 and aimed at over 35million Hispanics living in the US. The show may have first belonged to the Latino community, but with US Spanish-language television firmly incorporated into the corporate media mainstream, it was no minority TV–and this complex cultural dialogue/exchange continues in and through Ugly Betty. That said it was largely thanks to the efforts of Hollywood “A” list Mexican actress Salma Hayek that the Colombian telenovela ripened into Ugly Betty. Purchasing the format for her production company Ventanarosa to develop, Hayek says: “We've been trying to bring the Latino experience to television for many years. I was a big fan of Betty, la fea because it was different–it was very funny. So we thought this would be the perfect bridge where we could bring something that all the Latin community would feel is theirs into American culture” (Wilson 2006: 7).

Maybe, but in that bridging process the series has become enclosed within US broadcasting working practices and prevailing television conventions. Unlike American scripting processes, story arcs for the telenovela are planned well in advance: conclusions are already mapped out; and writers work toward those goals. Not so for the American Ugly Betty. Subject to network dictates and the vicissitudes of ratings no one can foresee how long a specific show will last. With no definite end in sight it is difficult to predict the length of a particular storyline–for example, the possible love entanglement between Betty and Daniel–as you can with the telenovela. (In a twist the German telenovela, Verliebt in Berlin, ran into difficulty when its broadcaster Sat1 decided to recommission the hugly popular series for a second year but without the main couple whose narrative arc had been resolved. Fans were not impressed.) 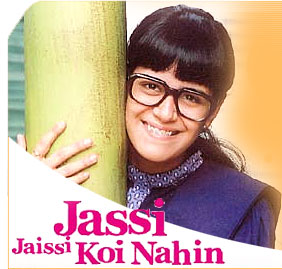 Michel Foucault has maintained that power relations are not seamless, but instead are always producing new forms of culture, identity and subjectivity, new chances for change and transformation. Where power exists, he claimed, so does resistance. Dominant institutions and values are persistently being infiltrated and reinvented by forms, conventions and values that have developed and gained potency and uniqueness at the periphery. Existing at the margins of American television culture long behind it, the telenovela has moved from the outer edge to the centre. A shift self-reflexively made visible in Ugly Betty as it self-consciously references the distinctive cultural heritage of the generic form that originated in Latin America in the 1960s. Anyone familiar with the telenovela is not likely to forget its distinctive look and outlandish plotlines. It is possible to watch episodes of both Vidas de Fuego and Muchas Muchachas, the telenovelas watched in the Suarez household, on the official Ugly Betty website with Salma Hayek playing the role of privileged heroine Sofia Reyes, whose attempts to seduce her stepson and gain control of the family business are central to the narrative. Each short episode begins by a tracking shot through the Suarez family home into the television and the highly melodramatic world of the obviously dubbed telenovela–a shift from one fantasy space into another. Enclosed in the fictional world of Ugly Betty, the telenovela with its hyper-melodramatic storyline, Hayek's camp portrayal of the outlandish heroine, and tawdry stories of sex, seduction and betrayal is made strange; its tales are as out of sync with the heart of the story that belongs to Betty Suarez as is the dubbing. But Ugly Betty reinvigorates and diversifies the serial dramedy form as it absorbs codes and conventions from elsewhere. Such transformation is not startling; but emerges only gradually in its bold visual style, representational types, proliferation of new identity politics and (cultural) values while paradoxically continuing to adhere to prevailing US TV norms (narrative structure, generic format–and we knew that it was too good to be true that American TV executives would actually hire a genuine ugly duckling to play the lead role).

At a recent conference at Manchester Metropolitan University in Crewe, UK, doctoral candidate Bianca Lippert offered a comparative study of the Colombian, Indian and German versions of Yo soy Betty, la fea, investigating similarities and differences within mythic narration, fairy tales and melodrama. It provoked intense debate from the assembled crowd over what Betty's femininity represented (and why unruly eyebrows, a bad haircut and thick spectacles are ubiquitous signifiers of ugliness). The Cinderella story maybe popular enough to sell globally, but selling on the concept for indigenous production companies to develop within the “local” indicates more complex meanings. That each woman heads for the big cities–New York, Berlin–leads us to suggest the importance of a more cosmopolitan cultural outlook that comes from increased mobility, and speaks of a globalisation in which these fictions circulate. But how these women respond to the challenges express 'local' difference.

For example, in the Colombian version Beatriz is a symbol of uncorrupted innocence. In a region where corruption has destabilised successive governments, the “goodness” of Beatriz has particular political resonance. In India Jassi's story is about an aspirational middle-class young woman who leaves behind her family to find work in the city. Providing a new twist Jassi does not marry her Prince Charming, Armaan, but instead realises that self-esteem and dignity are worth more than a wedding ring. According to channel head Tarun Katyal the message is clear: “She is no longer interested in being a walkover. Through her we want to send out a wake-up call to all timid middle-class girls caught in oppressive relationships–it could be with a parent or a boyfriend.” Much more work is thus required to fully understand the complex identities (gender, class, ethnic, cultural, national, regional, etc.) in play within the local/national/global contexts.

In the week when Ugly Betty picked up the Golden Globe for Best Comedy TV Series, and America Ferrera won Best Actress in a TV Comedy, news reached us about the “Be Ugly” campaign. The idea behind the US project, we are reliably informed, is to promote self-esteem and end stereotyping at a time when there has been a trend toward an obsession with celebrities of skeletal proportions and Size 00 models. Is this not what our Betty means to us in the US and UK? Have we not seen too much? Routinely invited to look behind the body imagining process–plastic surgery, extreme diet and exercise plans, radical dental work, anti-ageing substances to be applied and/or injected–are we not meant to conclude that the attainment of glamorous perfection is less a shop window than a modern day freak show? Have we thus entered a new age of geek chic? Is Ugly Betty the new Sex and the City where self-esteem is priced more highly than Manolo Blahniks?