Studio 60 and the Limits of Self-Critique 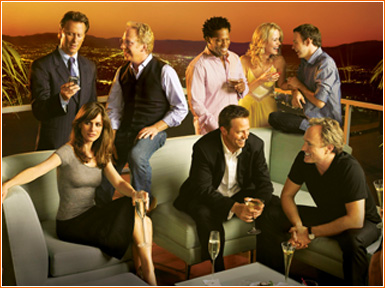 Recently, I was surprised to realize that I was looking forward to the premiere of Studio 60 on the Sunset Strip. There were plenty of reasons to give this one a pass, after all. For one, NBC relentlessly hyped Studio 60 as “quality television,” heaping praise on series creator and West Wing veteran Aaron Sorkin’s “intelligent” writing and the “amazing” cast full of TV veterans like Matthew Perry and Bradley Whitford. Since my tastes admittedly run to the broad and trashy, such talk of “TV worth watching” usually sets my teeth on edge.

At the same time, I was intrigued. If the conceit of The West Wing was that it brought viewers backstage into the corridors of executive power, Studio 60 promised a “behind the screens” look into the television industry. Here viewers would sit ringside in the battle between art and commerce, as a team of actors, writers, and producers work frantically to broadcast ninety minutes of Saturday-Night-Live-style sketch comedy each week.

And as a media professor fascinated with the political economy of American television, this show-about-a-show seemed particularly interesting. How far would Sorkin go in portraying the raison d’être of commercial television: delivering affluent audiences to advertisers in a mood to buy? Sorkin has clout, I thought. Let’s see how he uses it.

At the center of the Studio 60 universe are Matt Albie, the fictional show’s head writer, and executive producer Danny Tripp. In the pilot, we learn that Matt and Danny worked on the show four years ago, but were cast out of the fold when Matt’s satirical sketches were viewed as “too unpatriotic” in the immediate 9/11 aftermath by network brass. When the show’s current producer melts down in the middle of a live broadcast and delivers a Network-style tirade against American television, the network’s new president, Jordan McDeere, convinces Chairman Jack Rudolf to bring Matt and Danny back to run the show. Rounding out the characters are the cast members of the fictional Studio 60, including especially Harriet Hayes, a conservative Christian and the most talented comedienne on the cast. Her off-again, on-again romance with Matt–an agnostic Jewish secularist–provides the show with the contractually obligated amount of romantic spark.

So far, two main tensions animate the drama. The first, and least interesting, is show’s treatment of America’s culture wars. The fictional Studio 60, it turns out, is constantly besieged by conservative Christian organizations threatening the show’s advertisers with consumer boycotts. In fact, not only did such fundamentalist outrage prompt the earlier sacking of Matt and Danny, but the meltdown of the show’s former producer was provoked in large part by last-minute orders from the network brass to cut a sketch called “Crazy Christians.”

In usual Sorkin fashion, however, the show’s narratives labor to demonstrate that the secular/religious divide in America is not as stark as it appears. Harriet may promote her Christmas CD on Pat Robertson’s 700 Club, but she defends the show’s right to air “Crazy Christians.” Simon Stiles, another Studio 60 cast member, initially plans to ridicule a small Missouri town for canceling its high school production of “The Crucible” but then changes his mind, convinced by Hayes that while the hypocrisy of Christian leaders is fair game, the school boards of small-town America are not. And of course there was the laugh-out-loud moment when, after fighting off yet another network threat to cancel “Crazy Christians,” the cast joins hands in Christian prayer, proving, in true “after school special” fashion, that you can’t tell a book by its cover. 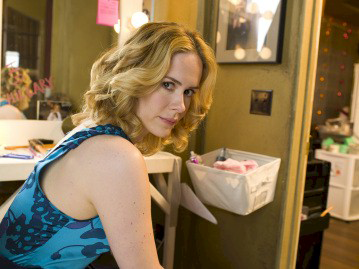 Leaving aside the obvious point that, in corporate America, this would never, ever happen, the prayer scene illustrates a more fundamental problem with Sorkin’s political statements: there always seems to be, with Sorkin, a mushy, reasonable middle-ground that smart people can find if they sincerely try. Any notion of incommersurable ideological systems and basic conflicts of interest is out of bounds.

More interesting is the show’s treatment of the battle between art and commerce in Hollywood. Most often, the protagonists in this battle are represented by NBS Chairman Jack Rudolf, and the network’s idealistic president, Jordan McDeere.

McDeere, we learn quickly, is all about “quality.” She’s there to class up the joint. She knows, for example, the difference between Commedia dell’arte and Restoration comedy (hint: one is Italian and one is English). What’s more, she has a spine. In one scene, she defies Rudolf by “passing” on an exquisitely degrading reality show (Search and Destroy–best described as Temptation Island meets the Drudge Report). When summoned before Wilson White, NBS’s major shareholder, to explain herself, she delivers the following speech with a straight face:

“It’s patently disgusting. It appeals to the very worst in our nature, and whoever airs it will play a measurable role in subverting our national culture. It doesn’t belong on anyone’s air–certainly not ours, at a time when we’re trying to re-brand the network as a place for high-end viewers. I swear to God, sir, the better our shows are, the more money we’ll make.”

In the end, of course, the grandfatherly über-capitalist approves McDeere’s decision to pass on the show. And so it goes in Studio 60-land: good people (McDeere) encourage creatives to take risks and defend the right of viewers (well, maybe just “high-end” viewers) to access quality programming. Bad people (Rudolf) think only of money and dragging down standards for a short-term ratings win. But good news! The good people always win! In Sorkin’s alternative universe at least, art has kept commerce at bay.

Ultimately, however, Studio 60 pulls some major punches, revealing, I think, the boundary of the permissible on network television–especially when it comes to portraying its own inner political-economic workings.

All the easy targets are appropriately caricatured: the flame-spitting pressure groups that impose their views on others, the Armani-clad executives who dumb down television for short-term commercial gain, the standards and practices geek who frets excessively about offending Jerry Falwell and the FCC.

But thus far (and to be fair, we’re not even halfway through the first season) the truly big game–including the fictional network’s advertisers and Wall Street shareholders–have eluded Sorkin’s rhetorical arrows. I’m still waiting to witness a standoff between McDeere’s idealism and a boardroom of advertisers unhappy with the anti-consumption or anti-corporate “environment” provided by her programming.

This said, the biggest sacred cow left untouched by Sorkin’s Studio 60 has to be the concept of consumer sovereignty. For Sorkin, as much as for the propagandists of the NAB, the consumer is king. If the viewers want degrading reality shows, the networks will deliver them. If the viewers can be educated or inspired to expect “quality,” the networks will deliver that instead.

And so the debate ranges from those who wish to win ratings with schlock and those who wish to cultivate “better” public taste (and, in the end, better ratings) by exposing viewers to quality programming. That, ultimately, ratings are transparent expressions of the cultural and political desires of “the people” is questioned by no one.

Just the opposite in fact. In one recent episode, the cast and crew of the fictional show were feeling the pressure to keep at least 90 percent of the previous week’s audience. This would allow the saintly McDeere to argue that the show is reaching “the people” despite the protests from conservative groups. At the end of the show, when the predictably high ratings come in, McDeere hugs Matt and Danny and exults, in the kind of voice one usually reserves for announcing, say, the birth of a child: “we built by 9 percent over last week, including a point and a half in the demo!” 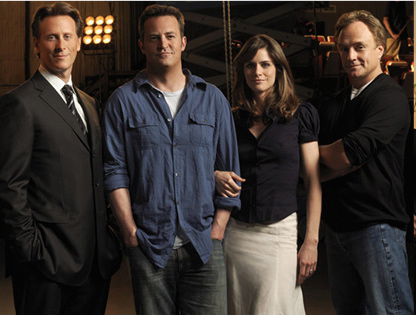 As critical media scholars, we know the notion of consumer sovereignty is, as the Brits say, pure tosh. Eileen Meehan’s newest offering, Why TV is Not Our Fault, is the best in a long line of books that assault the notion that ratings transparently express the tastes of the public and force programmers to respond to our needs. At best, ratings register the choices that a sample of the consuming class make from a menu of alternatives already approved by advertisers and corporate owners. We can all name programs that were doing well in the ratings, but not with advertisers, and we all know what happened next.

Perhaps, as I write this, Sorkin is penning an episode that deconstructs Nielsen ratings and the tacit boundaries set by advertising and corporate ownership. But somehow I doubt it. This is what Raymond Williams meant by economic structures setting limits and exerting pressures. It’s much easier, and much less risky, to plumb the culture wars than to explore and critique the economic foundations of the industry that employs you.

In the end, I like Studio 60. I like the steadicam shots, the busy, chaotic set, and the rapid-fire witty banter. I like that the show takes television seriously as a cultural and political forum.

But there’s something ultimately unsettling about the show, and I think I put my finger on it. As Shawn and Trevor Parry-Giles have argued, for all its surface liberalism, Sorkin’s West Wing ultimately reassured Americans that the country was in the hands of talented and dedicated people. And now Studio 60 labors to offer us the same reassurance about the television industry. For every Jack Rudolf, there is a Jordan, a Danny, and a Matt. Your television, dear viewer, is in good hands. Would that it were true.