Intervention and the Kodak Moment 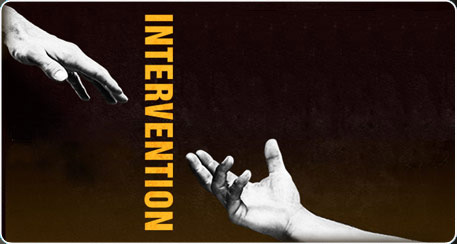 In Camera Lucida, his seminal investigation of photography and photographic knowledge, Roland Barthes examines his fascination with a few select images in an attempt to arrive at a universal truth of the general field of photographic objecthood. Reinscribing fascination as an “internal agitation,” Barthes comes to understand his preference for particular photographs, identifying those images that give birth to certain interferences.

I am fascinated by transitory images that move between and are articulated as public and private; by studying this process, best understood as a movement, either physical or psychical, I aim to reveal the general processes of inscription by which images take on meaning or through which acquired meanings are discarded and meaning shifts. The images that have most recently caught my attention are the occasional portraits–childhood photos and home videos–that are part of the narrative arc of each episode of A&E's Intervention. Located quite early in each addict's story, it is here that family members begin the search for the addict's traumatic break. Most often it is the parent that narrates the addict's back story, recounting the moment at which the normal child veered off course, and began the downward, self-abusive spiral that birthed the current day addict. The audio track is synched with what stands in as visual evidence–a montage of still images, culled from family photo albums, and an occasional video fragment pulled from the family archive. This happenstance synchronicity prompts the viewer to scrutinize each image for signs of breakage, engaging the reader in the “where's Waldo” task of locating sign and symptom. A brief excerpt from the synopsis of “Sara” (season one, episode five) is indicative of this orientation: “At 24, Sara had everything she ever wanted in her sleepy Minnesota town. She had a fairy-tale wedding in Hawaii, a beautiful baby girl, a house, three cars, and even competed in beauty pageants. Then, it all abruptly ended in divorce.”

In “Salina and Troy” (season two, episode eighteen), the on-camera confessional of Salina's mother leads us into the familiar photomontage. Asking and recounting, her mother relates: “What made her turn at this point, I don't know. But this isn't what was supposed to happen to my daughter at 24.” As the background music opens on the second audio track, and the voice-on becomes a voice-over, the montage begins first with baby pictures, then with family photos, then with school portraits, holiday photos, and photos with friends. The Ken Burns effect (a zoom in or zoom out on a photo still) opens each image up to increasing scrutiny, changing our proximity, mobilizing an otherwise static image. And Salina's mother continues: “When she was a baby she just looked like a cute little doll, so I just started calling her dolly… When she was a small child, we were pretty strict with her. Her dad was pretty strict with her. … Salina made a poor choice and left school with her cousin. Someone was showing a gun and the gun went off and Salina's cousin was shot right in front of her. Salina was devastated.” Intertitles push causality further, relating: “By 15, Salina was purging six to seven times a day. That same year, she witnessed the death of her cousin.” The combined forces of strict parenting, peer pressure (Salina confesses her teenage years sucked; as a Hispanic minority at her school, she felt the proportions of her body did not match those of the girls around her), and death are posited as a series of sequential ground zeroes for her bulimia, and the individual tale of displacement posited as a larger morality play, urging us perhaps to re-read our own family photos, to search for signs of trauma.

Migratory Patterns
John Tagg opens The Burden of Representation by contextualizing the assertions made by Roland Barthes in Camera Lucida, personalizing the author's claims, grounding them in a narrative of loss (the death of Barthes's mother). It is significant that Tagg begins his investigation of the history of photography as a tool for social regulation by introducing the concept of loss. Mourning oftentimes leads to the desire for authentication, for distilling or channeling the experience of grief into a sealed referential vessel that can guarantee closure, and photography is often asked to serve such an evidentiary function. Here the mourner enacts a willing and unproblematic embrace of the indexical nature of the photograph.

Yet even the most intimate images have a habit of migrating, of moving from personal spaces to public ones. To what degree do the commercial imperatives of privately-owned publicly viewable exhibition venues constrain personal images, attaching them to new narrative threads? Though personal images may be produced independent of one another, existing as distinct bodies, as they begin to move they are often gathered up, grouped together under one structure and one unified interface. Read as a collection, their uniqueness is lost to their sameness and any studied observation of them leads to a certain inertia.

One of the leading titles in each episode of Intervention inflects the program with cultural weight, and at the same time moves from the statistical to the anecdotal: “Millions of Americans struggle with addiction. Most need help to stop. These are two of their stories.” This movement is also one from the national to the local, from a broadly public crisis to one understood as the sum total of individual, private case histories. The naming of each subject follows a similar binary. Salina is positioned as “The Nanny. The Bulimic.” Far from static poles of identity, these categories are literally morphed together in title form, mirroring the goals of the intervention–making the split subject a unified one, yet at the same time making the subject knowable to us through a series of otherwise fixed categories, of normality and its opposite.

Each episode's arc closes post-intervention, moving the subject into treatment and in some cases pushing further along the timeline to recount the subject's success or failure (read in terms of completing treatment and staying clean and sober). And the outcome can be read back temporally against the program's air date, leaving the lingering question as to the subject's more current state. While the intervention itself is the climactic moment of the narrative arc, the denouement, found in the movement to what most closely approximates the current day, yields the most dramatic punch, for it either affirms or denies not simply the process (the use-value of the intervention as a moment in an addict's life) but more significantly the degree to which the evidentiary trace found somewhere in the montage-effect of childhood is understood as not a moment of misrecognition but one that either affirms or denies the possibility of mitigation much later on in life, a possibility that returns the photo to a safer order, as it potentially detaches any lingering aura of a psychic break that might otherwise remain attached to the image. The damage has been contained, and the photo can be returned to the family album, no longer a phantom limb of a traumatic subject. In a similar fashion, the intervention at the heart of the show seems more about the needs of friends and family, which seems to be less about cure and more about closure–a terminal point for grief and mourning, yet another sealed referential vessel, with its own rituals (most notably the reading of testimonials, of first-person letters drafted specifically for the occasion).

Photographs can give us insight into the constructed nature of subjectivity, if we pause long enough to reflect on them. In her book Family Frames: Photography, Narrative and Postmemory, Marianne Hirsch considers the ideological project of the familial gaze, a culturally and historically specific projection that governs the ideal of family and, by association, the production of images of it.[i] Family photographs cannot be understood as a neutral repository of the private; these images are a contested terrain, subjected to a particular set of representational conventions that construct the individual subject inside the family and by extension construct the family inside society. The range of addictions covered by Intervention, defined both by substance (heroin, crystal meth, morphine, crack, alcohol, Vicodin) and behavior (gambling, shopping, raging, binging, purging, cutting) is as varied as the individuals profiled in the show's first two seasons; yet just as addiction itself, which suggests excess at its very core, is reduced to a formulaic narrative trajectory (which is what we expect of any episodic television drama), so too are its subjects reduced to a shared vernacular, firmly grounded in the familial and its stable of representations. The subjugated knowledges of these speaking subjects, of these addicts, even when they rise to the surface and are “vocalized,” are re-bound and submersed within a number of superseding narratives, intimately bound to both family and nation. While these may be “their stories,” each episode leaves me with the lingering question of where they are. And I don't mean this in the limited sense of their relative sobriety or their physical location, but more in the sense of fixing exactly where they are signified in the body of the story, in the episode's narrative geography. As I try to stage my own intervention with a series of representations, it seems the honorific portraits littered throughout the series are destined to take on their inverse function as repressive instruments, as tools in the assignment of typology (either criminal or pathological), always positing the individual as addict–pre-addiction or post-addiction, but always in relation to the term. This is, for the viewer at least, the only point of entry, not invested in the family album, and only able to position the addict as one in a million. This is not a liberatory gesture; it does not suggest an escape from the repressive function of the familial gaze. As the localized family (the circle of biological kinship) fades from view, the national family appears on the horizon.