Studio 60 on the Sunset Strip

During the opening sequence of the pilot episode of Aaron Sorkin and Thomas Schlamme’s latest series, Studio 60 on the Sunset Strip, Wes Mendell (Judd Hirsch), the producer of a weekly, live sketch comedy series interrupts the opening sketch to apologize for what will be an uninspiring episode of the show featuring few genuinely funny moments. Mendell then launches into an extended Howard Beale-inspired invective against the current state of television, lecturing to his audience that “I think you should change the channel, change the channel right now or better yet turn off the TV. Now, I know it seems like this is supposed to be funny, but tomorrow you’re gonna find out that it wasn’t and by that time I’ll have been fired. No, this is not a sketch. This show used to be cutting edge political and social satire, but it’s gotten lobotomized by a candy ass broadcast network hellbent on doing nothing that might challenge their audience….We’re all being lobotomized by this country’s most influential industry.” Mendell proceeds to condemn the increasing reliance on reality TV programs that feature contestants who eat worms and compete to be like Donald Trump.

Studio 60 was packaged for audiences as a form of quality television programming, largely on the strength of the writer-director team responsible for the cult phenomenon, Sports Night, and the critically-acclaimed presidential drama, The West Wing. While the pilot episode did produce one of the more compelling, if flawed, moments I’ve seen on television this fall, reviews of the show have been tepid at best, even among Sorkin’s fans, who have faulted the show’s writing for being both self-indulgent and heavy-handed. Both of these flaws are evident in Hirsch’s opening monologue. While Mendell’s criticisms of television carry some weight, in no small part due to Hirsch’s delivery, they also ring false. The jabs at reality television series such as Fear Factor and The Apprentice, in particular, seem to have arrived about three years too late, while the comments about a lack of “quality” programming also ignore a number of compelling, thoughtful series ranging from Veronica Mars and The Office on the networks to Battelstar Galactica and Entourage on cable. And yet, as I watched the pilot episode on my computer a few days before it aired on television, I found myself hoping the series would develop some momentum, perhaps in part because I am a sucker for meta-fictional series such as Studio 60 and Entourage, but also, I think, because Mendell’s speech emphasizes the ways in which TV matters, both for the people who produce television shows and those of us who consume them. 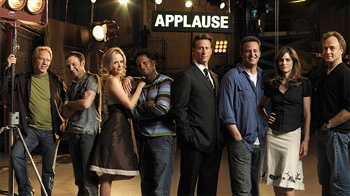 The cast of Studio 60 on the Sunset Strip

For those who haven’t seen Studio 60 on the Sunset Strip, the show focuses on the production of a late-night sketch comedy show produced by the fictional NBS network, comparable to NBC’s Saturday Night Live. When the show’s producer, Wes Mendell (Judd Hirsch), is fired for his on-air tirade, new NBS president Jordan McDeere (Amanda Peet) hires writer-director team Matt Albie and Danny Tripp, using Tripp’s positive test for cocaine use as leverage to entice both men back to the series they had left four years earlier. Complicating their return, Matt’s ex-girlfriend, Harriet Hayes (Sarah Paulson) is one of the primary cast members on the sketch comedy show. These relationships allow Studio 60 to tap into the backstage politics of producing a network TV series, including network executives concerned about ratings and actors competing for parts. Mix in Sorkin’s stylistic flourishes of intelligent dialogue and topical scripts and Studio 60 seems like the kind of show that would quickly cultivate an enthusiastic audience. However, the show has been faulted for its uneven, often self-indulgent scripts, a concern underlined by Todd VanDerWerff in his review at The House Next Door, who notes that the pilot episode, in particular, suggests that Matt and Danny have returned to rescue a floundering TV series, and by extension to “fix” television, with all of the myriad problems enumerated during the pilot’s opening monologue.

Despite its early limitations (or perhaps because of them), I am interested in examining how Studio 60 explores the function of television within a larger public sphere, a subject that clearly motivates many of Sorkin’s scripts. Early episodes have focused on network executives who worry about offending religious audiences with a comedy sketch called “Crazy Christians,” while episode three details Matt and Danny’s reaction to a focus group that concludes that the show is not “patriotic” enough. These topics could have been used to focus our attention on the industrial and economic landscape in which television series are produced; however, Studio 60 falters when it comes to representing its audience, most notably in its image of an undifferentiated mass of Christian viewers eager to boycott liberal TV shows at the first appearance of any offensive material (exactly what was so offensive about the “Crazy Christians” sketch, in fact, is never made clear). This conflict over Christianity is also played out, somewhat awkwardly, in the conflict between Matt and Harriet, a born-again Christian cast-member clearly modeled on SNL alum Kristin Chenoweth. Even a passing dig on bloggers (“Bernadette is writing in her pajamas surrounded by cats”) seems remarkably condescending towards the show’s audience, many of whom are, presumably, bloggers.[1] 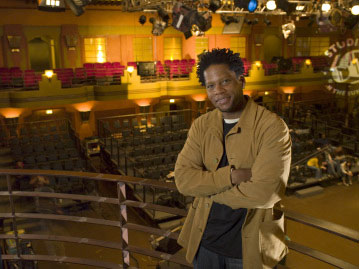 Studio 60 also focuses, in more or less interesting ways, in the challenges of producing a live television show. It is worth pointing out here that Studio 60 appears at a historical moment when popular definitions of television are under revision, particularly when it comes to the ways in which audiences encounter television programming, especially as TiVo and other digital video recorders, not to mention video hosting services such as YouTube, increasingly chip away at the “flow” of broadcast television. And I think this is where Studio 60 seems most out of synch. The studio of the sketch comedy show is dominated by a giant clock that counts down the days, hours, and minutes until the next episode of the show, placing special emphasis on the liveness of the sketch comedy show. This emphasis on the show’s liveness is most explicitly addressed in episode four, “West Coast Delay,” in which Simon (D.L. Hughley) and Harriet are forced to re-record a sketch several times when it is discovered that the sketch may have been plagiarized from an obscure stand-up comedian (it turns out, of course, that he’d stolen the sketch from one of the writers for the show). In my reading, Studio 60’s treatment of a live broadcast seems like one of its most significant structuring characteristics, and it is difficult, for me at least, not to read the show as faintly nostalgic for some moment in the past when shows such as Saturday Night Live could claim something close to cultural centrality.

Despite these problems, I remain optimistic that the show can contribute to our ongoing discussions of the institution of television. While Studio 60 suffers from struggles with self-importance and navel-gazing, it is also valuable because it takes television seriously and provides room for talking about the role of economic and industrial factors in the production of a major network television series, a question that is far too rarely addressed in any significant way.

Note
[1] Thanks to Lance Mannion, who happened to be live-blogging this episode of Studio 60, for pointing this out. See Lance Mannion, “Blogging Studio 60 on the Sunset Strip.”