Television and the Practice of “Criticism” 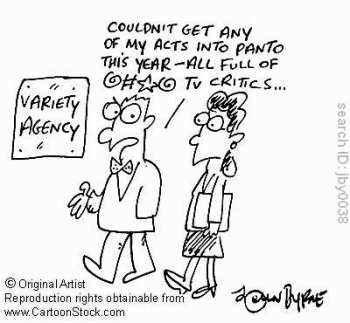 The idea of “criticism” as a practice of analysis and of knowledge in the arts has long been a matter of dispute. What is the function of criticism? What kind of connections between an artefact and social and political contexts should it seek, and how equipped is it to extend its range beyond the object (novel, painting, score, film, television program) which is its immediate concern? How openly subjective should it be, stressing a personal relationship (“response”) between critic and work or, conversely, what level of objectivity can it attain, what “scientific” support can it draw upon?

Questions such as these have recently been heard more often in television studies. A complicating factors here is that many people seem unsure as to whether television really warrants the seriousness indicated by the idea of a body of criticism. Television may deserve criticising, yes, but that is (perhaps confusingly) rather different from criticism, which often includes appreciation as a primary goal (as, for instance, in the strong tradition of literary criticism). It’s quite interesting to compare television with film in this respect. Film studies has now, internationally, achieved the status of an art form that deserves a serious body of critical attention, which it has certainly acquired, although its history shows the tensions between attention to Hollywood and to forms of “Independent” and Art Cinema.

Television raises questions of “value” of a more openly contested kind than cinema, even though individual films frequently raise important issues of value. This is partly because television is regarded as inherently systemic (and the system often judged as dubious). Although cinema is also seen as, partly, systemic (e.g. the changing economics and parameters of the Hollywood system), individual films are largely treated by scholars as “works.” Another point, related to this, is that television is rightly seen as more pervasively social than film both in its range of contents, its modes of address and, of course, the range and character of its delivery to audiences. This presents a challenge to the “critical stance”, which traditionally tends to work with a sense of the aesthetic object as possessing a certain level of autonomy from the conditions in which it is produced and consumed. We might call this a relative level of aesthetic density, providing sufficient richness, contemplative depth and scope for the exercise of criticism as an intellectually challenging practice. Not everyone is quite sure TV is up to offering this on a regular basis. The way in which newspaper and magazine TV critics regularly use their column to make humorous points about life in general and enjoy nothing better than to “rubbish” a bad program seems to be one indication of this.

There is a further difficulty too. Television is generically heterogeneous, in particular across the boundaries of fictional narratives, factual accounts and various kinds of entertaining event, some presenter-led. One might think the safest bet for someone setting up as an academic critic of television is to stay with “high end” drama, slipping across to pick up the occasional sitcom or soap now and again and maybe the more interesting (e.g. symbolically dense) documentary. Indeed, quite a few critics do this (particularly those who still operate from a firm base in Film Studies). However, the emergence of more work wishing to centre itself on television has produced academics who want to talk about the full range of output. Often, those who have a “critical” inclination find themselves in tension with those who are coming at things from the point of view of sociologists or political analysts or historians, bringing with them the toolkits of the social sciences and also its particular concerns for data and method. The social scientists are often not hugely impressed by an activity that seems dangerously close to a kind of “personal phenomenology”, is which media productions are “read” and judged for their qualities and wider meanings largely in relation to the views, predilections and insights of the critics themselves. The tension is increased by the fact that those taking the “critical approach” don’t simply want to talk about programs and let the sociologists do all the detailed inquiry into politics and society. They want to talk about social and political implications too (indeed some appear to want to do this more they want to talk about programs, a very odd thing to find in an art or music critic, or even a literary or a film critic).

It is clear that some of the writers who contributed most importantly to the development of inquiry into television employed forms of engagement that drew on literary critical models. What emerges from this body of writing is a rich, sensitive and complex sense of how television works as a medium of communication. What also emerges, if by no means always, is a level of evaluative assertion about “quality” and the impact upon audiences and even the whole socio-political system that begs a lot more questions than were often recognised. Critics not only “read” the programs, they “read” the audience. For many years, they tended to read the audience pessimistically, as part of a general view of the consequences of the television system for society. More recently, some have read the audience optimistically, writing from the vantage point of a “fan” themselves. The new position carries with it a more democratic ethos, but some underlying problems concerning the basis and function of the judgements offered remain. With simplification, one can see the rise of audience studies in the 1980s as in part an attempt to expand the terms of engagement beyond the terms of criticism, whilst not giving up on the possibility of offering a critique and not slipping into the more reductive categories of media sociology when it discusses questions of meaning.

Where does this leave the possibilities for an academic television “criticism”? There are certainly challenges here. It lacks the self-conscious “critical community” of the other arts (including film). It often attempts to engage with diverse materials far from the core aesthetics and artistic ambitions that have provided the focus for “criticism” elsewhere. It is frequently in danger of being drawn into either polemical opposition or seductive alliance with the industrially championed imperatives of “popular taste.” If that wasn’t enough, there’s also the rival claims and sometimes open hostility of media sociology to take into account.

What we perhaps need is more inquiry that locates critical “readings” within a wider array of approaches. Criticism can also benefit by bringing its perspectives into further and deeper engagement with what we are learning, and have still to learn, about the working criteria of media production and about how the taste cultures of television are generated and sustained through audience attributions of “worth.”

Criticism’s mix of subjectivity, analysis and evaluation, though problematic, is valuable. Its assertiveness and occasional tendency towards the wacky carry benefits. We need to sustain a good level of openly judgemental debate about the kind of television we have and the kinds we might have. But increased self-awareness, more care in its claims-making beyond the immediate focus on textual form and meaning and stronger connections with other (not necessarily more “objective” but often cooler) modes of inquiry would help “critical” work on television develop better as a discourse of knowledge as well as a discourse of cultural dispute.

Note: This is part of a longer commentary, in preparation, on television and the “critical” idea.