When I first sat down to write about Lucky Louie, HBO’s first foray into the multiple-camera proscenium sit-com, I had no attachment to the show other than its aesthetic practices, which are significant enough. After all. HBO’s crucial place in the history of the sit-com lies in its regeneration of “film style” (i.e., one camera) shooting practices. Its first show, Dream On (1990-1996), used this technique so that it could cut between the characters and old movie clips. The Larry Sanders Show (1992-1998), HBO’s flagship series until the 1999 debut of The Sopranos used one camera shooting techniques to parody the multiple camera techniques of the talk show. Finally, the one camera shooting style of Sex and the City (1998-2004) took the cut away one camera moments of Seinfeld (NBC, 1989-1998)–which foregrounded Manhattan in the midst of a traditionally shot multiple camera show–and made them the dominant motif of the show’s exploration of single women’s lives in New York City.

The aesthetics of Lucky Louie seem deliberately designed to herald, yet again, HBO’s crucial importance in the history of television. Like All in the Family (CBS, 1971-1979) before it, the show revels in its low rent style. Norman Lear’s experiment was built around a radically flat and barren x-axis set, purportedly to showcase in isolation Archie Bunker’s racism. Lucky Louie features a similarly bare set, also shot on a noticeably less nuanced videotape, especially in comparison with the aforementioned HBO signature shows. In its refusal to apply the sit-com form to the major political issues of the day as did All in the Family, Lucky Louie perhaps skips back even further, to the very origins of the television sitcom itself, rendering a sex- and expletive-filled version of The Honeymooners (CBS, 1952-1953): Louie (Louis C.K.) and his wife Kim (Pamela Adlon) struggle to make it in their grungy apartment building in the big city, supported by their friends, Mike (Michael G. Hagerty) and Tina (Laura Kightlinger), echoing the struggles of Ralph, Alice, Ed, and Trixie fifty years ago.

But then something remarkable happened: I began to like the show. I find this odd to say the least: It is a distinctly unlikable show, filled with unfunny R-rated stints consisting of men’s verbal assaults on women’s anatomy. Louie’s friends are homophobic and downright detestable. However, in the show’s first ten episodes, I have not yet encountered one that does not, at discrete moments, shock me with its intelligence. In fact, I think of all the shows I am currently watching, Lucky Louie is the most intertextually rich show on television. In the pilot (June 11, 2006), Louie’s and Kim’s daughter, Lucy (Kelly Gould) has a childish fit at having been given, by their upwardly mobile African-American neighbors, a black Barbie. In the middle of her 4th birthday party, Lucy begins sobbing about how much she doesn’t like the black Barbie. The scene comes straight out of Imitation of Life (Douglas Sirk, 1959), at the beginning of which Sarah Jayne demonstrates her first sign of radical assimilationism when she rejects her black doll in favor of the white one that her “adoptive step-sister” has. However, the Lucky Louie pilot moves beyond this now ancient 1950s liberal critique of racism. When Louie goes into the hallway to throw out his trash, the black neighbor, Walter (Jerry Minor), sees that among the detritus is the black doll. When Louie tries to cover for his insult, Walter explains that they only bought the doll because they were “half off.” Walter calls Louie on his intentions–“I get the feeling that you’re only trying to acquire a black friend”–which Louie admits to immediately. 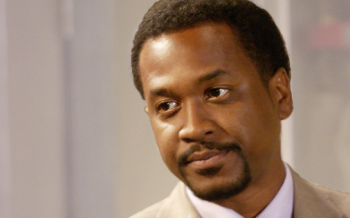 Three episodes later, in “The Long Weekend” (July 2, 2006), Louie and Walter again engage in some of the most honest engagements with race on American television. Standing outside having a smoke, Walter observes matter-of-factly that it must be great to be white. After some denial, Louie finally fesses up: “Yeah, it’s pretty sweet.” Walter retorts, in a hilarious deadpan delivery, “If white people aren’t having a good time, what’s it all for?” However, the episode is built around Louie’s failure to find success, despite his whiteness. This time, he has spent the rent money for a $300 Frankenstein doll on E-bay. Louie exits his conversation with Walter explaining, “See, I don’t even know how to be white.” Whatever the show’s more general problems, it is moments like these–interrogating the complex relationships between race and class in America–that converted me into a fan of the show.

In its examination of the white working class, Lucky Louie builds on HBO’s expertise, established most clearly in its equally innovative reality show, Family Bonds (2004). The pilot ends with the mother teaching her son to ride a bike after the abusive father has failed, a moment that stands in my viewing experience as the most heartfelt and honest depiction of the kind of community I grew up in when I was young (and my family was poor). In its depiction of frank sexual relations among married people, Lucky Louie furthers a different HBO strength, one found most explicitly in Curb Your Enthusiasm (2000-present). While the show is rightly celebrated for its improvisational examination of public social dysfunction, what strikes me as most relevant to my life is Larry’s spot-on and quite wonderful relationship with his wife Cheryl. They talk frankly about their sexual desires. At one moment, I think the show’s best, Cheryl complains that Larry never initiates sex. He explains that he is always available, but that he is merely being respectful of Cheryl’s personal space. While the gendering of things is very different in my own relationship, it is refreshing to see frank discussions of sexuality on television that ring true of what goes on in real bedrooms.

Because it is a show based on an R-rated comedian’s act, Lucky Louie is awash in sexuality. However, beyond the unfunny sexist jokes that Louie’s male friends share with him, back in the private seclusion of their bedroom (of course made public for us in the audience), Louie and Kim are honest, flawed lovers. In a hilarious preamble for an episode, “Drinking” (August 6, 2006), Louie lies awake obsessing over his paralyzing, existential dread. His babbling about death wakes Kim up. To shut him up, she gives him a hand job. In a hilarious moment, she asks him if he’s still thinking about death, to which he replies in the negative with a happy grunt and a smile. At this point the credits roll. I can think of few moments on American television that so delightfully capture the idiocy of male sexuality. 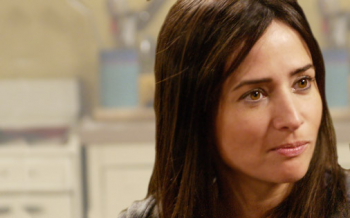 Lucky Louie is most obviously a show whose importance lies in its radical aesthetic style. On this point, I have given the show short shrift. Week in and out, it uses the traditional x-axis set of the family sitcom with virtuosity. In the episode, “Discipline” (July 23, 2006), clearly the best so far, Louie is trying to keep Lucy from becoming a spoiled brat, and being undercut by Kim, who, because she works all day, is overly indulgent with the child. As Louie is trying to give Lucy her first time out, somewhat incompetently by locking her in the closet (which the show’s pilot and subsequent episodes have established as the place he likes to masturbate) on the right hand side of the set, Louie rushes over to screen right to lock Kim out of their front door. As he is doing so, Lucy escapes from the closet and runs towards the camera in the front of the set. This moment captures wonderfully the potential of stage design in the American sitcom.

However, what has me excited about the possibility that the show will continue beyond its initial twelve episodes is its intertextual depth, not at either the aesthetic or narrative level, but at the level of the individual, throw-away moment. As one final example, in the episode “Get Out” (July 30, 2006), Louie’s friend Mike’s teenaged stepdaughter is going through a rebellious phase, running away and living with a sleazy middle-aged man named Carl. Their friend Rich explains the behavior at the dinner table in terms he seems to have learned from watching too much Animal Planet: “Mike is the dominant male. He wants to kill Shannon and eat her.” While the line itself is unfunny and sexist, it indicts the phony science and anthropomorphism of the natural history programming rampant across the basic cable outlets. Any show that is smart enough to do something like this will keep me watching next week.