Family, Fate and the Finale of Will and Grace

Will and Grace banner

“So, what did you think?” It's the question that friends and colleagues greeted us with in the days following the final Will & Grace episode. Thanks to a journal article that we authored in the series' early years,1 those asking were looking for more than the typical water cooler answer. Imagine how taken aback they were when we replied: “It's Tivo'd. Haven't watched it yet.” Truth be told, since completing our original essay we have not really “thought” much about the program. However, we knew that we couldn't approach this final episode with the same sense of detachment with which we'd approached recent seasons.

How sadly ironic that as we fired up our Tivos to discuss the final episode of this gay-friendly show, political leaders were once again debating an anti-gay marriage amendment. Yes, GLAAD's headline proclaimed that the amendment was “resoundingly defeated,”2 but a 49-48 Senate vote indicates that politicians seeking re-election found it safest to align with Senate Majority Leader Bill Frist, who proclaimed, “Marriage between one man and one woman does a better job protecting children better than any other institution humankind has devised.”3 At least we could take solace in the fact that Will & Grace's final episode was redefining marriage and family. Or, was it?

This last episode revolved around a glimpse into the futures of our four main characters. Of key concern would be finally resolving the delayed consummation plot device that remained central to the program throughout its tenure. In fact, the delayed consummation relationship between Will and Grace served as the raison d'etre of the series creation: create an insurmountable barrier to romance to avoid the ever worrisome post-consummation ratings drop. In the final episode, we get two imaginations of how this situation will resolve itself in the future, one monstrous and the other a dewy eyed fulfillment of the characters' “fates”.

The monstrous is presented to us at the beginning of the episode in the form of Grace's nightmare. A very pregnant Grace sleeps on Will's sofa after they have decided to raise her child together. In the dream, Will and Grace have morphed into the very worst versions of themselves–Will a pudgy, balding gay man (two fears stereotypically associated with gay men), and Grace an overweight, bitter hag trying to hold on to her youth through ridiculous fashion choices (paging Bridget Jones). The son they chose to raise together is a surly troublemaker. Their normally fastidiously clean and decorated apartment has grown worn and dirty. An attempt to play “Password,” a clear reference to the first episode, leads to a recognition that they are dried up, bitter shrews whose attempt to redefine the idea of family has ruined their lives. When giving Grace clues for the new password, Will ends up saying in a flat voice “Our souls. Our hopes and dreams,” to which Grace correctly responds, “Things that are crushed.”

Once Grace awakes from her dream, we witness the events leading up to the “real” resolution. When Leo–Grace's ex-husband and father of her child–turns up, Grace leaves for Rome. The show gives us a time advance of two years, in which we see Will and Grace leading separate, but virtually parallel, lives: Grace and Leo raising their daughter, Lyla, and Will and Vince raising Will's biological son, Ben. While we applaud Will & Grace for presenting a well-adjusted family with two dads at the helm, like much about the program, the queer potential of this representation is constrained by sitcom conventions. Happy, heteronormal nuclear family units abound, but cannot intertwine. We learn that our favorite twosome have not spoken in two years.

Despite the comic attempts of Jack and Karen to bring Will and Grace back together, our central dyad, now separately cocooned in new dyads, cannot connect. But this is a sitcom, so of course, there had to be some way for Will and Grace to finally get together. Here we come to the most heteronormal ending imaginable, a marriage between Will and Grace's children. Just to clarify that Lyla and Ben are unmistakably surrogates to Will and Grace, we are presented with a scene that first appears as a flashback to Will and Grace's initial meeting in college, preceded by Will and Grace's separate meditations on their shared belief that their relationship was fated to be. After they both dismiss the hand of fate, we find a young red-headed woman and dark-haired man moving across the hall from each other in a college dorm. As they both make jokes completely in keeping with the main characters' personalities, we are led to see them as younger versions of Will and Grace. It is only after the two express an instant attraction to each other that they introduce themselves, and we learn that we are not flashing back but forward to the initial meeting between Will and Grace's progeny, Lyla and Ben.

The apparently straight hand of fate has finally resolved the relationship between Will and Grace through this surrogate consummation. The ending was offered to a mainstream audience as a satisfying and palatable conclusion, because it left untouched the central structure of the program as well as the tried, but true, romantic sitcom finale formula. Even we could not predict such a relentlessly heteronormalizing end for the program, and six seasons ago, we had spent 20 pages piling on evidence to “prove” that the show was, in fact, heteronormative, despite all the critical acclaim it originally received (remember all those Emmys, Golden Globes, People's Choice, and GLAAD awards?). At least we could feel vindicated in our original arguments about the show.

Thankfully, Will & Grace was never a two-person show, but featured a second key dyad: Jack and Karen. While we originally argued that their subversive potential was limited by their infantilization within the familial structure of the sitcom, we couldn't help but love them, and are more cautious to condemn the resolution of their characters' storylines. In the finale, Jack and Karen swap co-dependent roles, with Jack coming into money and Karen losing hers. The two grow old together, noting that their relationship with each other has outlasted any with husbands or lovers. 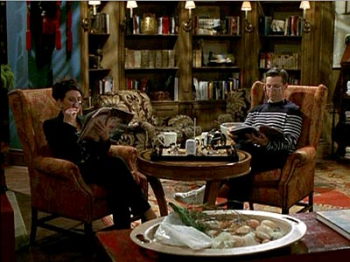 Yes, we recognize that these two characters are still infantilized in this final episode. Yes, we also acknowledge that these, the most “deviant,” characters of the show are unable to find successful romantic relationships, and, yes, in becoming caretakers for Rosario, they're positioned as the third nuclear family unit in the program. Despite this, Jack and Karen come closest to reimagining family in a non-heternormative way, in part because their resolution draws the most attention to the constructed nature of family. Additionally, in Grace's initial dream, while she and Will become frumpy, bitter life partners, Jack and Karen find happiness in their own relationships, with Jack marrying Kevin Bacon and Karen marrying a butched-up Rosario. Although this resolution could only happen in a dream sequence, it provides a delicious moment to reimagine the world through the eyes of the queerest, and most “unforgettable” characters of the show.4

Now that network television has closed this chapter in its short book of sexual diversity, we're left wondering what next “groundbreaking” show to move onto. Perhaps it will be one of the new network television programs from this past season with leading gay characters, like ABC's Crumbs, or CBS's Out of Practice. Oh, that's right, they've already been canceled. Vindication is not so great after all.

2. Grace's Nightmare or “Things that are crushed.”

3. The “aged” Grace and Will meet outside their childrens' dorms.

4. The “aged” Karen and Jack live off Jack's money.