At the End of the Day We’re all “End Users” 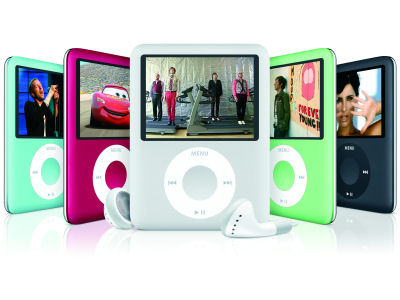 I just finished two and a half weeks of travel visiting family and friends. I always find travel unnerving for a slew of reasons. Airports and four-hour flights are replete with awkward vies for my attention. It may be my forfeiture of privacy that bothers me, but I am going to guess that gobs of Airport TV, mediocre films and crappy sitcoms are likely villains. I often feel like my airlines are involved in some sort of large-scale media effects experiment to see just how much “in-flight Tim Allen exposure” an audience can take before it resorts to spontaneous, collective cannibalism in order to ease the pain.

But on this vacation I travelled prepared: my video iPod, Nintendo DS, the trusty laptop and some reading got me through my travels with a newfound ease. When flights offered their in-flight entertainment menus, I was able to put the “xnay” on it with my gaggle of video gizmos. And I was not alone. Each row in coach had two to three laptops running as well as a game system and a portable DVD player. A substantial majority of us were equipped to the hilt and using every piece of personalized media possible to ignore what they had never demanded.

The more I consider the above scenario of personalized media, the more I am reminded of Tara McPherson's comments about viewing television at the time of Katrina

I can't remember the last time I watched live TV. Even during the media circus that followed the devastation of Katrina, I had my TiVo working overtime, taping hours of coverage I'd peruse later, while I logged time at my keyboard searching interactive maps, video snippets, and blog feeds. We might read our current investments in DVRs and 500 gig hard drives as our attempt to stave off television's insistence that we immediately forget. Today, memory is cheap.

That's one way to look at it. Another way to think about audio-visual media is it has entered the world of the end user, a world that audio has had to deal for over a 100 years: a world of time shifting and, since the 1950s and the mass arrival of magnetic tape, textual manipulation by the “end user.” After all, DVRs and 500GB hard drives are little more than records that operate at the discretion of the user. Just like audio years ago, the audio-visual has completely escaped the clutches of its producers and, prohibitions be damned, is now firmly in the grasp of the user.

However, the move to “user” is not without its own thorny set of issues. As Henri Lefebvre notes in his recently translated, The critique of everyday life volume iii: From modernity to modernism, that,

Received representations and commonly used words are insidious vehicles for a morality, an ethics and an aesthetics that are not declared as such. It may be that innovations, gradually accepted and virtually unnoticed, conduce to the inertia or corruption of daily life. Here is an exemplary instance, already signaled elsewhere, which is worth stressing given the gravity of its consequences: the substitution of the 'user', figure of daily life, for the political figure or the 'citizen' (pg. 78).

As problematic it is for many of us to think of the “user” as a substitute for a citizen, the movement from the citizen/commodity audience to the end user is a convenient way to frame broadcast history. And even though anyone reading this column already understands this, allow me to share the simple conceptual tool I use give to my students. Since the arrival of broadcasting in the 1920s two competing visions of the listener/viewer reigned supreme: the citizen and the commodity audience. In variations on a Reithian theme, the state-run broadcasting corporation guides the “citizen”. The broadcaster paternally envisions the needs of the citizenry first which, as we all know, plays out in terms of programming. If we were to measure this in terms of “football matches broadcast” (FMB), it would mean, at best, a few matches a week. Even though demand may be nowhere even close to being met by two or three matches a week, their appearance in the schedule is strictly regulated in order to ensure proper program diversity as determined by the state.

Less grounded in the desires of the state is the vision of “commodity audience.” It is gained, lost, missing, demanding and, most importantly, a zero-sum commodity that is captured, exchanged and exists as the basis of commercial broadcasting systems, systems that are regulated though not governed by the state. As a result the FMB number is much greater and the matches are on at a variety of times, channels, etc. The audience in this frame is somewhat active, but most importantly for corporate capital they are measured and these measures
are interpreted as demand. Still, the audience is relatively passive as it is subjected to a set of textual and temporal choices that are beyond their control. In other words, you want your football; you wait till it is broadcast.

Broadcast media, in the age of end user is something entirely different. It seems to be governed by the individual who is invested in specific lines of technology and standards that are often unregulated as well as being developed and administered by forms of private capital. The result is the audience finds the final two restrictions of text and time so substantially reduced that they can use audio-visual media the same way child might use playdough. Media for the end user is malleable: it is molded, shaped, stretched or simply placed on the shelf a ready-to-be-used entity. Let's put this in FMB terms once more just to follow this through with the example. Sure you cannot schedule the big match, but now you can purchase the big game after the event and play it over and over again at your own discretion. Better yet, you
really like football? Strike up your Xbox, play your matches, record them and play them back for your friends in an edited DVD that highlights moments of your virtual season. AV really goes DIY and television in the YouTube world is truly fast, cheap and (almost) out of control.

If countless Mentos-in-Diet-Coke videos have proven anything to us, it is that audiences with DSL, PCs and Digital cameras have become much more adept at making and molding video for their own purposes than I think most scholars could have predicted. It is interesting to watch two “old media” institutions react, as TV audiences have changed into TV users. As one New York Times article recently documented, when a number of dissatisfied groups of Star Trek fans didn't like what the broadcast universe gave them, they decide to pick up their consumer digital video cameras, edit on iMovie, and distribute their new series on the net. Allow me to editorialize for a second here: awesome. As the article notes, as long as these groups are not making a profit on the property Paramount seems to be more than willing to turn a blind eye
and let the fans live their dreams of exploration.

Of course when there is money involved, it's another story altogether. One of my more recent laugh-out-loud moments reading an on-line trade came in the reports that ABC wants MSOs to disable the fast-forward buttons on the DVRs they supply customers:

according to ABC President of Advertising Sales Mike Shaw, with the primary goal to allow TV commercials to run as intended.

Shaw also threw cold water on the idea that neutering the fast-forward option would result in a consumer backlash. He suggested that consumers prefer DVRs for their ability to facilitate on-demand viewing and not ad-zapping–and consumers might warm to the idea that anytime viewing brings with it a tradeoff in the form of unavoidable commercial viewing.

Once you stop laughing, consider that for every Mr. Shaw, there are smarter corporations who understand that the name of the game today is catering to the “end user” and, rather than neutering technologies, are interested in helping you better personalized media. To be sure, one of the reasons that I continue to bring up pop music examples, particularly the iPod in my Flow columns is that they are illustrative of the situation that the receiver as “end user” is in. As much “fun” as I found my iPod, the number of uses I have found for of my iPod has quickly multiplied. Like others, I thought it would be great for long walks, but rarely do I leave home without it and I always take it to work as a storage device so that I can quickly access media material and multimedia lectures. And, to be frank, I needed to become a much more adept media “user” in order to make my arguments. And guess what, the iPod, my Mac and a number of off-the-shelf programs are the kitchen tools I feel compelled to buy and upgrade to cook up my own “malleable media.”

Yet Lefebvre's comments concerning how the user has supplanted the citizen disturbs me because, truth be told, I like my malleable media even if it means that while I opt out of the state regulated media of yore, I am knowingly “buying in” to the Empire of Jobs simply because
it better designed to make me feel like I am involved in media production and that somehow my podcasts and blogs matter. And with this in mind I wonder if older political institutions such as city hall and the school district are getting the message that the need to embrace more wikis, blogs, and podcasts because it is important not only to have citizens make a difference but also feel like they are making a difference. No longer can they rely on the daily newspaper and the 6 O'Clock news to help curry effective citizenship. It used to be that the state, the city and the district had our attention due to hgeographical and temporal default. Because this is no longer the case, it doesn't mean that citizenship is dead, or even dying… but it should make us pause. If city hall and my local school board actually care about our participation (and who is to say that they do), then they better make the information they want to get out much more user friendly, much more malleable. Otherwise someone like myself will most likely miss the mayor's news release in my endless quest to avoid most things “Tim Allen.”

Video courtesy of You Tube.