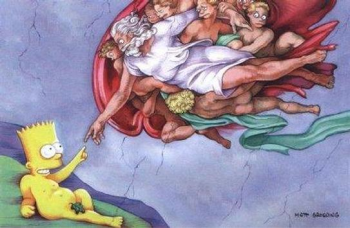 Spoofing on The Simpsons

There's a kind of television I nickname “savvy TV.” By this, I don't mean programming with presumably deep intellectual content – not Masterpiece Theatre or Charlie Rose. It’s not so much a question of content but of practices of viewer targeting by which an audience of presumably astute intellectuality is played to and ego-stroked for its ostensibly discerning ability to tap into learned references and arcane in-jokes within the television experience. “Savvy TV” operates through several strategies. There is, for instance, the clever allusion and the way that spotting it flatters the talented viewer. Two examples at random: the mid-1980s detective show Crazy Like a Fox included a scene in a film school where the establishing shot showed a professor telling a student to study for an exam by reading the works of Dudley Andrew and Christian Metz (!!); or, an early episode from The Sopranos had young gangster Christopher seeing Martin Scorsese on the street and yelling “Kundun” in appreciation – a complicated reference since that obscure film is the least likely Scorsese film that one imagines Christopher would know (let alone like). Of course, The Simpsons has made a career – one of its many “careers” – from packing complicated, intellectually astute allusion into its entertainment.

There is also the strategy of incorporating into a show various images of the practice of interpretation and of practitioners of interpretation not unlike those the savvy viewer encountered in college lit or film classes (or still encounters if he/she is a professional in a cultural realm, such as the university). Hence, MTV early on included a psychoanalyst who commented between clips on the multiple meanings of sexual difference within the spectacle. And The Sopranos is rich in scenes like the one in which, for a school assignment on Robert Frost's poetry, Soprano son A. J. has his sister Meadow explain to him that both black and white can symbolize the void of death. Whatever their specific realm of employment, so many urban professionals, so many members of what Richard Florida terms the “creative class,” have had schooling in interpretation, and there is pleasure to be found in seeing both its common protocols and its excesses (“if it's longer than it is wide, it must be a phallic symbol,” one college professor taught us) banalized and regularized in the stories we watch. All that college learning in the humanities pays off on the viewing couch.

The creative class has been trained to appreciate paradox, surprise, aporia, and contradiction, and this can include irony and upset aimed at its own values and beliefs. As I suggested in my last Flow column, a show like The Sopranos derives much of its effect for its target audience by playing with viewers, toying with them – turning the television experience into a ludic duel of mockery and oneupsmanship. Savvy television often operates at the self-delighted expense of the very audience it is setting out to captivate. It dares one to spot the reference, to solve the puzzle. Its tactics often seem particularly tricky for the academic television analyst who can find his/her best insights turned into amusing fodder for mockery, deconstruction, and ironic reversal in the shows themselves.

Thus, where I had reflected in an earlier Flow column (“I Got Plenty of Nothing [and Nothing's Plenty for Me]: Television's Politics
of Abundance”) about the absence of books on television and suggested it was a symptom of the medium's reluctance to find space for that slow, patient form of critical analysis that books represent, recently savvy TV had a bookish trick of its own up its sleeve. The finale of The West Wing included a quick shot of a copy of Michel Foucault's “Society Must Be Defended”: Lectures at the College de France, 1975-1976 being taken off a shelf as the office of former president Jed Bartlet (Martin Sheen) was packed up to make way for the new president, Matt Santos (Jimmy Smits). Step aside, Janet Jackson and wardrobe malfunctions: here was a TiVo moment for critical theorists! And within a day fan-sites and chat rooms were rife with speculation about what it meant: a general reference to Bartlet's intellectual voraciousness? a specific comment on his openness to European culture (compared to our actual administration's disdain for “Old Europe” and active scapegoating of France for its resistance to the Iraq war)? a reflection on the way Bartlet's administration was geared to the liberal defending of American society? 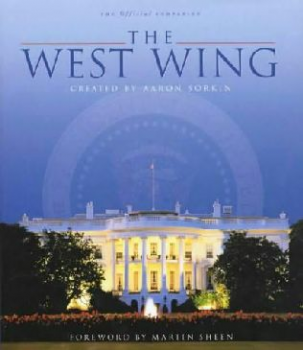 At the very least, it seemed a good gag even if one couldn't figure out what it meant. But maybe the allusive elusiveness itself was the meaning. Knowing the ways in which academic media studies has given its lessons to so many media practitioners – who then have to work at making the insights of theory relevant to their everyday professional activity or put them aside – it is easy to imagine the former film and media students who now work in the industry willfully playing with the very sort of knowledge they got in college and that they know makes members of the creative class swoon with delight. The appearance of the Foucault book could as likely be homage or in-joke.

Certainly, the evidence suggests that no one connected with The West Wing had read Foucault's volume in such a way that had consequence for the specific political points the show's narrative world set out to make. The quotation marks in the title of “Society Must Be Defended” are ironic: Foucault intends precisely to unveil how the discourse of the state as defender of society is duplicitous, an apology for brute applications of power, control, and discipline. Briefly, Foucault chronicles a history in which social life is not benign cooperation but a form of conflict, even permanent war. In the modern period, the impulse toward bellicosity turns inward to transmute into a form of internal crowd control as the nation state finds it necessary to police its citizens through an enterprise that Foucault terms “bio-power” (and which is much more about power over population than over individuals – these being the province more of “discipline” than of the wider-reaching “bio-power”). Deriving from Foucault's reading of, among others, the Black Panthers, but anticipating today's research on interconnections of race and incarceration (for instance, Ruthie Gilmore's much anticipated Golden Gulag: Prisons, Surplus, Crisis, and Opposition in Globalizing California), the lectures in “Society Must Be Defended” move inexorably toward rendering the modern state as de facto a “State of Racism.” The modern state wages war against its own by engaging in discourses and practices of purification and elimination.

None of this, of course, appears in the liberal space of The West Wing's fictional world. Bellicosity is directed outward – to terrorists, rogue states, failed empires. America is in no consequential way at war with itself. At most, there is some conflict in politics but that is something that charismatic leadership, negotiation, compromise, and recognition of the higher, shared good will generally put to rest. At worst, the internal conflicts of America come not from the state but from deviant figures (wacko Christian rightists, disgruntled workers who run rampage, homespun racist militia men, and so on), and the state itself is seen as above domination, discipline, power, and control. On the one hand, The West Wing holds out a dream of peaceful cooperation (Santos asks his Republican opponent in the presidential elections to be his Secretary of State: it's nice to be benign domestically when the right can enact your hawkishness internationally). On the other hand, the show assumes that beneath politics lies an atomistic realm of personal lives that are not really about politics, not really touched by the state. (Thus, the finale ends with each West Wing staffer going off to their private lives as if the political is something you simply close the door on; the personal is not the political.)

But the end of the Barlet regime is also the end of the television show that dramatized its reign, and here perhaps “Society Must Be Defended” has few insights to impart. That is, Foucault's book doesn't really say much about the specific ways media and culture operate and how their textual operations might aid or not in securing the needs of the modern state. (Indeed, in the few instances in which Foucault's book looks at cultural representations, his approach tends to get fairly reflectionist: Shakespeare's tragedies are “about” the rapaciousness of royal power; Gothic novels are “about” the rapaciousness of an aristocracy that is declining in power at the end of the 18th century.) Ever since Discipline and Punish, which appeared a month before the start of the lectures that became “Society Must Be Defended,”
it's been tempting to imagine that Foucault can be enlisted in the analysis of visual culture and media. But one fundamental problem is that Discipline and Punish is about citizens being looked at while television is about them looking: how to get from one to the other? No doubt, the connection could be made, no doubt the mediation of media and discipline could be forged, but it remains an unfinished critical project. In this respect, savvy television and savvy theory can continue to revolve around each other, each imparting its own useful lessons about the complicated world we live in.