Is It Live or Is It Real?: Live Television's Shrinking Significance in Modern Life 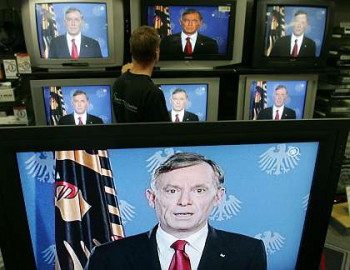 It has often been argued that a primary reason for television’s popularity is its ability to become part of an American household. Favorite programs and well-liked personalities become members of many viewers’ extended families. The act of inviting certain television shows into one’s home can be a surprisingly thrilling and intimate experience. In the past, many television viewers were connected to the medium by one of its most exciting occurrences: the live program. Live broadcasts simultaneously offered the titillating lure of plans gone awry along with the mass bonding of a shared encounter in ‘real time.’ As live television rapidly disappears from the broadcast schedule has it become an archaic art form that symbolizes a simpler America that no longer exists? Was live television ever the optimal format for narrative broadcasting? Has the word ‘live’ lost its meaning in an on demand world?

Purists often lament the death of live television, complaining that a sense of fun and surprise has been lost. Although it is undoubtedly true that ‘taped’ art forms are less spontaneous, one must question if that necessarily is a bad thing. To consider this question one must think of television not as a whole, but as a medium that provides different kinds of programming. The most common type is probably the serialized scripted narrative that has been written about in such works as John Fiske’s Reading Television. If one accepts that the primary goal of this type of program is to create a coherent and engaging ongoing story that entertains the audience then one must question the merits of performing live. One could easily argue that combining multiple taped takes of an actor’s performance showcases his/her skill better than the camera work of a live broadcast. 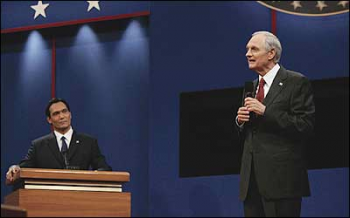 Additionally, the element of surprise that exists in a live program can often distract from the narrative. Imagine watching the latest episode of Lost live instead of on tape. Is the hatch door not opening because it is a clue to the nature of the island or is it a technical glitch that the actors have to work around? Is Sawyer smirking because he knows something we do not or is the actor having a difficult time staying in character? The fundamental uncertainty that live television provides does not generally exist harmoniously with the structure needed for narratives. Although some programs like ER and The West Wing have been performed live in recent years, these were one time gimmicks designed to create media buzz. An ongoing live narrative series is almost unthinkable, not only from a technological perspective, but also from a storytelling one.

Is there not a place for the thrill of anticipation of the unexpected that live television can provide? Of course there is, two of television’s most recognizable outlets, news and sports, are often live affairs. Even in these categories live does not mean better though. Many news segments are recorded and edited and some sporting events like ESPN’s highly rated World Series of Poker are taped and broadcasted months later. While sports and news may be the most recognizable, arguably the most visible type of ‘live’ programming is reality television. Yes, even though some would argue that reality television is highly scripted and edited, one of the basic appeals of the form is that it gives viewers an opportunity to watch the unexpected occurrences of ‘real’ life. Reality television is marketed as a chance to view the unscripted lives of strangers, which provides unexpected and thrilling moments that could not be written. One could even argue that reality television often provides ‘live’ television moments better than actual live programming. Live television allows for the possibility of creating excitement by something going wrong but rarely does anything surprising happen. In fact, it is the job of the shows’ producers to not allow things to go awry. In contrast, reality television aims to manufacture such moments. In other words, a viewer would have a much greater chance of witnessing a surprising moment on reality television than the traditional live format.

Does it not matter that reality television is an artificial entity that only mimics the thrill of the unknown? To many viewers it does not and this speaks to societies’ understanding of the word ‘live.’ In a world of email, answering machines, video conferencing, and ATMs we have come to understand that sometimes live does not mean best. As our lives become filled with newer ways to learn, communicate and be entertained our understanding of time and place is altered to fit this new reality. Could our perception of what ‘live’ and ‘authentic’ means have changed? Is television just an indicator of a larger cultural shift? Certainly, there are negatives to this proposed loss of desire for authentic live relations, the loss of community and social interaction being the two of the biggest. There are far fewer ‘water cooler’ programs than in the past and only a handful of live programs gather people together in large number, with American Idol and the Super Bowl being the major exceptions. This does not mean that the lack of live programming is positive or negative but rather it only means that it is the new reality. In the end maybe the desire for live moments in television is just a nostalgic urge for the bright days of one’s youth. It is analog viewers remembering a time before a digital age.