(TV)antipathy: A Prolegomena to the Metaphysics of Television Hating, Part One 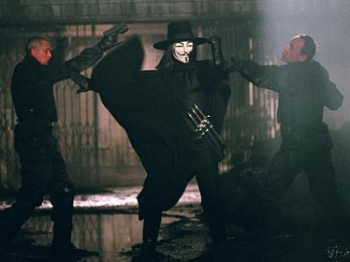 V for Vendetta, now in theaters, tells the story of a not-too-far-distant future totalitarian England and a revolutionary in a Guy Fawkes mask who fights to overthrow it. No one familiar with literary and cinematic dystopias will find it surprising that one of V’s chief targets in a year-long-strategy to bring down the British government is an attack on the headquarters of the BBC. In V’s nightmare world television, as in Brave New World, 1984, Fahrenheit 451, Do Androids Dream of Electric Sheep?, and a score of other stories about future hells is an essential instrument in oppressing the masses, bullying and hypnotizing, harrying and manipulating, surveiled by and surveiling an audience of dupes. That one of the small screen’s harshest detractors, NYU’s (TV)antipathist Mark Crispin Miller, would conclude, in the final chapter of his Boxed In: The Culture of Television, that the horrendous world Orwell prophesied for the 20th Century’s next-to-last-decade had been clandestinely realized, and its cruel tyrant conjured, in our living rooms: “Big Brother is You, Watching,” Miller was convinced (309-31).

Television has always had its detractors, television executive Newton Minnow’s characterization of it as a “vast wasteland” (1961), for example, or American comic Fred Allen’s quip that television is called a medium because it is “rarely well done” (quoted by Bianculli, 59). Such sniping is not my concern here. In the present column and in a future issue of Flow (Volume 4, Issue 7, June 16th) I want to revisit a more philosophical form of “(TV)antipathy” to which I once subscribed myself.

Four Arguments for the Elimination of Television. My one-time monolithic hatred of television began in the late 1970s when I discovered former advertising exec Jerry Mander’s 1978 rant against TV’s inherent evil almost immediately after its publication. Television cannot be reformed, the book argues, any more than guns can, and unlike weapons technology, it is the technology itself that kills. Though divided (I am tempted to say “gerrymandered” but will not) into four parts, Mander’s title is a bit misleading; still his overall thesis is clear enough. Television severely mediates experience, walling in human awareness, expropriating knowledge, and setting us “adrift in mental space.” It colonizes the mind, dims it, turns us “into our images,” immerses us forever in “artificial unusualness.” In a later book, 1991’s In the Absence of the Sacred: The Failure of Technology & the Survival of the Indian Nations, Mander would offer the following “Martian anthropologist” take on television man, which stands as a précis of his allegations:

“We are scanning the Americans now. Night after night they sit still in dark rooms, not talking to each other, barely moving except to eat. Many of them sit in separate rooms, but even those sitting in groups rarely speak to one another. They are staring at a light! The light flickers on and off many times per second. . . . The humans’ eyes are not moving, and since we know that there is an association between eye-movement and thought, we have measured their brain waves. Their brains are in ‘alpha,’ a noncognitive, passive-receptive mode. The humans are receivers” (77).

My 1970s abhorrence for and complete distrust of television, a stance that would lead me to go without a television set for almost ten years, a deportment for which Mander was my frequently-quoted and often distributed bible, had more than a little to do with drug use. Unless you had been there, it is difficult to describe what an alien, alienating, Orwellian “influencing machine” (as Mander liked to call it) television — or at least 70s’ television — seemed under the sway of LSD. On acid, the movies seemed liberating and mind-blowing, but television? On my many 1970s’ trips I solemnly vowed never to succumb to Big Brother’s medium, never to fall under its insidious sway. I have strayed.

No Sense of Place: The Impact of Electronic Media on Social Behavior. During the 1980s, my reading continued to feed my distaste and distrust of television. In Joshua Meyrowitz’ No Sense of Place (1985), for example, I learned that electronic media in general and television in particular subtly alter — through a transformation of our customary “situational geography” — our sense of proper behavior in given social settings, bringing Goffman’s “backstage” behavior into the foreground, for example. If today, we often witness behavior once considered inappropriate for “mixed company,” if we no longer “know our place” or understand the appropriate agenda of a given situation, it is, Meyrowitz shows, because media like television tear down the barriers that once segregated situations. “It is extremely rare,” Meyrowitz writes, “for there to be a sudden widespread change in walls, doors, the layout of a city, or in other architectural and geographical structures.” Such change, however, is the norm in the world of mass media, engineered not by architects or city planners but “by the flick of a microphone switch, the turning on of a television set, or the answering of a telephone” (39-40). The specialness of time and place can be destroyed. “If we celebrate our child’s wedding in an isolated situation where it is the sole ‘experience’ of the day,” Meyrowitz writes, “then our joy may be unbounded” (311). The intervention of electronic media, especially television, changes all that:

“More than any other electronic medium, television tends to involve us in issues we once thought were ‘not our business,’ to thrust us within a few inches of the faces of murderers and Presidents, and to make physical barriers and passageways relatively meaningless in terms of patterns of access to social information” (308).

By the time I read Meyrowitz, of course, I had already allowed the intruder back into my home — how could I deprive my young daughter of the essential enculturation it alone could provide? — but I put No Sense of Place right beside Mander on the bookshelf and in my mind. 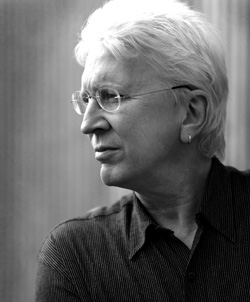 Cambodia: A Book for People Who Find Television Too Slow. Indeed, I remained on the lookout for more fuel to feed my (TV)antipathy. Though largely still-born and ignored, Brian Fawcett’s Cambodia: A Book for People Who Find Television Too Slow (1986) practically jumped off the shelf into my greedy hands. In a book with a most unusual format — it consists of a series of essays and fictions, with titles like “Universal Chicken” and “The Fat Family Goes to the World’s Far,” on a wide variety of phenomena from crowd control to baseball, train wrecks, and the novelist Malcolm Lowry and a running subtext concerning Pol Pot and the Khymer Rouge’s reign of terror, McLuhan’s fellow countryman Fawcett fulminates against memory and imagination’s extermination in the modern world. Cambodia was really a running commentary on the progress of what Heidegger calls “the oblivion of being,” our modern alienation from the authentic sources of reality. Although prominently displayed in his subtitle, Fawcett has relatively little to say specifically about television, but his thesis was clear enough: we are in danger of losing “our right to remember our pasts and envision new futures,” and we can watch this cultural genocide telecast live on the tube. “Cambodia,” Fawcett insists, “is as near as your television set.”

Boxed In: The Culture of Television. The same year (1988) I became a professor of media studies at the University of Memphis, my fellow English Ph.D. Mark Crispin Miller published Boxed In: The Culture of Television, which presented eloquent and subtle new denunciations of television. Offering, a few years after 1984 had come and gone, a Copernican revolution of the Orwellian dystopian primal scene, Miller would insist that “Big Brother is You Watching.”

“In America, there is no need for an objective apparatus of surveillance (which is not to say that none exists), because, guided by TV, we watch ourselves as if already televised, checking ourselves both inwardly and outwardly for any sign of untidiness or gloom, moment by moment as guarded and self-conscious as Winston Smith under the scrutiny of the Thought Police. ‘The smallest look could give you away. A nervous tic, an unconscious look of anxiety, a habit of muttering to yourself — anything that carried with it the suggestion of abnormality, of having something to hide.’ Although this description refers to the objective peril of life in Oceania, it also captures the anxiety of life under the scrutiny of television” (328).

“It is possible,” Miller writes, “that no contrast, however, violent, could jolt TV’s overseasoned audience, for whom discontinuity, disjointedness are themselves the norm; a spectacle that no stark images could shatter, because it comes already shattered. TV ceaselessly disrupts itself, not only through the sheer multiplicity of its offerings in the age of satellite and cable, but as a strategy to keep the viewer semi-hypnotized. Through its monotonous aesthetic of incessant change, TV may make actual change unrecognizable, offering, in every quiet living room, a cool parody of the Heraclitean fire” (13-14).

We may never be able to step into the flow of TV’s river twice, Miller would have us believe, but we will drown in its inauthenticity.

Mander, Jerry. In the Absence of the Sacred: The Failure of Technology & the Survival of the Indian Nations. San Diego: Sierra Club, 1991.

—. Four Arguments for the Elimination of Television. NY: Morrow, 1978.

Meyrowitz, Jerome. No Sense of Place: The Impact of Electronic Media on Social Behavior. NY: Oxford UP, 1985.

Miller, Mark Crispin. Boxed In: The Culture of Television. Evanston: Northwestern UP, 1988.