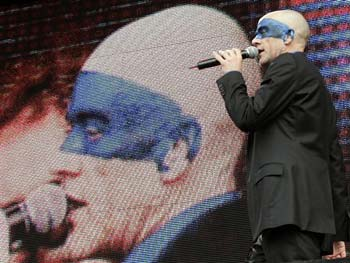 Ever since the Wachowski Brothers bowdlerized Baudrillard, the idea that we are living in a world made up entirely of simulations has become somewhat of a platitude. Rather than accept this extreme line of reasoning, I find it more fruitful (or at least more reassuring) to see some moments in our media-saturated lives as more real than others. In this world, we can still tell the difference between what’s real and what’s not, though this hardly guarantees that we’ll prefer the real to the fake every time. That would explain the not-altogether-unpleasant sensation I get when another bit of so-called real life experience is replaced with a simulation which everyone happily and knowingly embraces as if it were real.

Such a moment occurred a month ago at The Alamo Drafthouse Cinema, a beloved local movie theater that hosts sing-along screenings of musicals and music videos. That evening’s entertainment consisted of a collection of music videos and filmed live performances from the late ’80s and early ’90s. As we took our seats, clips from the documentary Heavy Metal Parking Lot played. So we began by laughing at individuals who, some seriously, some semi-seriously, proclaimed their undying love for metal and, more specifically, Judas Priest. I’m sure some of us shared this love. Our laughter was directed more at their outdated haircuts and the conspicuous lack of sleeved shirts than their sentiments.

Then came the videos. I never really gave much thought to what exactly I was performing while singing along to a song on the car stereo, but when surrounded by hundreds of other people singing the same words, it was hard not to think about audience reaction as performance. Was it a sort of mass karaoke, in which we all, on some level, imagined ourselves to be the performer? Were we performing the actions of an audience we once were, twenty years ago? Imagining that you are Axl Rose is (for most of us) so much of a stretch that it is difficult not to remain somewhat removed from this role. Imagining that we were part of another audience in another time, however, was quite easy, as it was a role not too far removed from what we were. One had to wonder: Did we forget that we weren’t watching a live performance? Did it matter to us?

At first, we seemed to move effortlessly between genuine appreciation and mocking (but perhaps affectionate) laughter at the painfully earnest performances from a time before irony invaded every aspect of art and life. In this respect, the Journey videos were especially remarkable. It is difficult to imagine how they might’ve been viewed sincerely. But something changed when the video for “Pour Some Sugar on Me” came on. We weren’t just having a laugh at videos we all remembered, which was fun in and of itself. I’ll be the first to admit that there were many factors that contributed to this transformation. By that time, people had had time to get sufficiently intoxicated. More important than that was the presence of hundreds of ostensibly like-minded people. The enjoyment came from the presence and performance of other spectators as much as, if not more than, the presence of the text/performer. 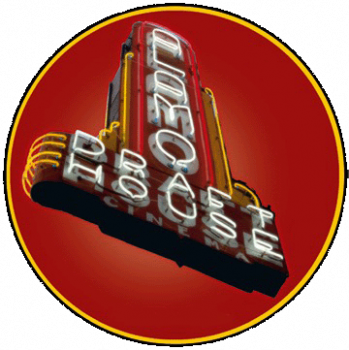 I thought back to the times I went to see shows at massive outdoor venues, too far away from the stage to see the performers, forced to watch their images on a giant screen. Was my experience at the Alamo really any different? If the actual performers were there, then we might have felt a little odd about combining our singing with laughter. In their absence, we could easily step back into our ironic stances and have a good laugh at what we were seeing and doing, or simply get on with our own lives and not worry about an actual performer or their feelings. This may or may not happen with cover bands. In those cases, it is hard to ignore the fact that these are real performers who probably have put their own creative material on the back burner to exploit the material of others.

I realized not only that so much of the joy that comes from a live performance is generated by the audience, but also that the concept of “live performance” may pertain as much to the audience as to the people on the stage. Film theorists are quick to point out that seeing a summer blockbuster in a crowded theater is just as communal as a rock concert. But when the audience is strongly discouraged from reacting aloud, from becoming part of the show, then their presence can easily be forgotten.

Several weeks after this at Austin’s annual South-by-Southwest music festival, I fought the tides of critics, A&R folks, and assorted hipsters to try to catch a glimpse of some of the 1,500 bands that were playing. Generally, I met with little success, but just seeing the utter desperation with which audiences pursued some bands, and other bands pursued audiences, got me thinking again about what makes a communal entertainment experience worthwhile. I’d never deny the power of a live performer to electrify a seen-it-all crowd of insiders, and there’s a certain spontaneity in such performances that recordings obviously cannot recreate. However, when audience reaction becomes part of an event, whether the performance is live or recorded, one gets the feeling (the illusion, perhaps) that anything can happen.