The Linguistics of Taste

IN ADDITION TO OUR REGULAR COLUMNISTS AND GUEST COLUMNS, FLOW IS ALSO COMMITTED TO PUBLISHING TIMELY FEATURE COLUMNS, SUCH AS THE ONE BELOW. THE EDITORS OF FLOW REGULARLY ACCEPT SUBMISSIONS FOR THIS SECTION. PLEASE FEEL FREE TO VISIT OUR “CALLS” PAGE FOR CONTACT INFORMATION.

Coors Light does not taste colder than Miller Lite or Bud Light because the universe won’t allow it. The universe or Mr. Webster.

Miller Lite does not have more taste than Coors Light or Bud Light because we do not live in an alternate world where everything that means absolutely nothing automatically becomes real.

Through the Spring and Summer of 2005, two of the three major American brands of light beer created television marketing campaigns touting superior aspects of their products’ taste. In so doing, the companies entered a unique place in the pantheon of dishonesty.

Advertising is inherently deceptive. The necessity of its presence contradicts its claim that the product or service it peddles is necessary. The deception, however, usually takes place within the realm of possibility. For example: Without Bud Light, your ears will stop working. This is a lie, but the disparity between cause and effect does not disallow the fact that ears can stop working. We will call this category of dishonesty the Full Lie.

But what about this: Bud Light tastes better than Miller Lite. Let us assume for the sake of the example that the qualitative differences between the two are minimal, or that you as the receiver of the message disagree with the claim. Bud Light may even comply with your standard of “better.” Either way, the implication of the statement is that the better taste of Bud Light is established fact–that taste is not a matter of taste. While around half of the recipients of that message will agree, or while some may be persuaded by the message that their own whims match its claims, Bud Light’s better taste can never be a fact because taste is not quantifiable, and no mean measurement exists to judge aspirants to the title of “better.” Still, people can either agree or disagree with the statement. “Betterness” exists, as do beers and opinions. The personal truths within the blanket falsehood serve to redeem the claim–to make it acceptable to those receiving it. But we cannot label this category the Half Lie. There is no such thing. A lie does not have degrees. And so let’s call it the Full-2 Lie. 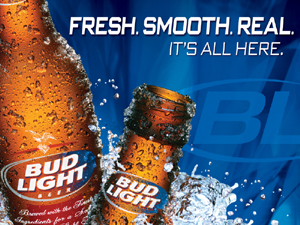 It is, in fact, this grading of the ungradable that has changed the message of the beer companies. Miller Lite’s 2005 campaign claims that the beer has “more taste” than Bud Light. In the commercials, people reveal hurtful secrets about themselves to significant others, to a response of easy acceptance. When they pull back the veil on Miller Lite’s larger amount of taste, however, their loved ones are visibly and comically dismayed. But what has Miller Lite promised? Taste does incorporate sweetness, sourness, and bitterness, and so the strength of the sensation, or its intensity in one of these categories, is not constant. One brand of beer could certainly be bitterer than another. But “taste” is a noun signifying the presence of those various elements. Both have taste, and Miller Lite can taste different than Bud Light. Neither, however, has more taste because taste, in its given context, is ungradable. 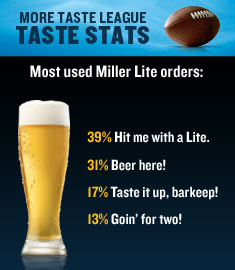 In other contexts, more-and-less terminology is appropriate. A taste can also be “a small amount.” Sitting across from that same significant other, a Miller Lite drinker could easily ask for “a little taste” of the companion’s Bud Light. But when commercials claim to have “more taste,” they imply the sensation provided by the receptors in the human mouth. Those receptors discern different tastes, they demonstrate the greater or smaller intensity of various elements of a final product, but the final product itself–taste–cannot be more or less. In making the claim, Miller Lite reformulates the presentation of advertising deception. Unlike better taste and unfunctioning ears, “more taste” does not exist. By proclaiming the banner, the company does not just deceive, it creates a false category. This Creator Lie, if I may name the type, has also found favor with Coors.

“Coors Light is the coldest tasting beer,” proclaim television commercials for the product. It is brewed in the Rocky Mountains and shipped in refrigerated trucks and boxcars. It starts cold, and thus tastes colder than its competitors. But how can this be? The noun signifier described above is the register of existence for various sweet, sour, and bitter sensations received by the mouth–elements that are inherent in the taste-carrier itself. Cold, however, is imposed externally. The temperature of any bottle of beer will fall when prompted, as will that of the Webster’s Dictionary. If a container of Coors Light and an advertising ethics manual are placed in a refrigerator set to forty-two degrees, both will eventually reach that temperature, irrespective of taste. “Taste,” in its various definitions and its simple role as noun signifier, does not include temperature as a valid component. When Coors Light claims to taste colder than its competitors, it similarly imposes an alternate category of dishonesty. Whereas Miller creates a false measure of taste, Coors creates a false component of it.

Imagine a claim by one of the brewers that “Our beer is preferred three to one by spacemen.” This seems pretty outrageous, as well. But “spacemen” can be interpreted as “astronauts,” and astronauts probably have opinions about beer. The claim would either be a Full Lie or a fact. Its structure eliminates the possibility of a Full-2 or Creator Lie. Unlike this seemingly absurd example, however, “more” and “colder” carry no possibility for alternate interpretation. Coors Light and Miller Lite create, and in so doing, destroy.

Both of the companies make impossible claims that, unlike Full or Full-2 Lies, serve to fundamentally harm the popular perception of language. The assumption of truth–or, for the more cynical, the assumption of a Full Lie–leads to either acceptance or misplaced frustration about the claims both the companies make. A lie is a lie. While claims of more taste and colder taste are not better or worse than other advertising deceptions, they are different, and that difference creates new consequences that we would all do “better” to acknowledge.