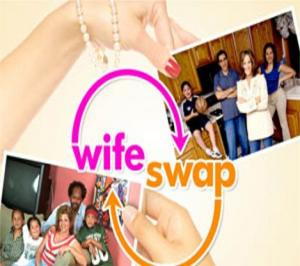 I’m intrigued by what I call the spouse-exchange sub-genre of reality television — specifically, Fox’s Trading Spouses: Meet Your New Mommy and ABC’s Wife Swap. I was very skeptical at first, though, suspecting that these programs (like their Survivor-type predecessors) did nothing more than exploit people’s baser instincts. In fact I’ve found that the contrasts between the families selected for these shows reveal a great deal about both human nature and Americans’ entertainment preferences. So I’ve enjoyed them in general and have followed their development. When I started watching just over a year ago the shows seemed pleasantly spontaneous (even if this made some portions a little boring); the contrasts tended to emerge in the course of the program’s narrative, helped along by skilled editing. Since then, the differences between the families participating have become sharper and more polarized. At least that’s how they’re promoted these days. It seems as though the producers have sifted through numerous applications from people wanting their “fifteen minutes” in order to pair the most obvious opposites. The online applications do ask some provocative questions, such as whether or not there has been any feuding in the applicant’s family.

Moreover, participants, now familiar with the shows’ premises, surely have done some self-casting as well–in the ways they choose to describe themselves in the applications. At this stage the shows really don’t seem scripted, but they do seem staged. The planned contrasts make for good promotions and teasers, drawing potential viewers to watch: dogmatic Catholic trades with a Wiccan; woman from Harlem trades with affluent woman from suburban Boston; wealthy, conservative housewife goes on the road with a family band. What really keeps me watching are the unplanned contrasts — the evidence of how very difficult it is to hide your true personality when thrown into an unfamiliar and stressful situation. It helps me to look more critically at some of those nagging stereotypes I carry around in spite of my liberal do-gooder façade. (Besides, the voyeurism is just plain fun.)

Recently, for example, I watched an environmentally conscious (obsessed?) man living in a co-housing community (“commune”) trade families with a tattooed biker on Wife Swap (“Husband Edition”). I let down my guard and figured the biker was an intolerant redneck, who would quickly lose patience with the “namby-pamby” lifestyle of the environmentalist. He wouldn’t last! But I wasn’t exactly rooting for the environmentalist, either. He was over the top — having changed his name from Bill to Zeb (for some reason having to do with spirituality, I think), devoting an inordinate amount of time to recycling and composting (without showing any real sign of having a remunerative job), and beginning family discussions with asinine songs about peace and love. Even though his values are ones I basically share, the intensity with which he pursued and expressed them seemed like nails on a chalkboard. But I figured he’d triumph in the end simply because he’d consider it a personal failure to lose patience with the biker’s family.

Ha! A rather different contrast emerged, and this actually determined the outcome of the exchange. By this I mean that if one person could be identified as the episode’s “loser” — and one loser usually does emerge — it would be the environmentalist, not his wife or children, and not the biker or any members of his family. He just came across as weird and inflexible. He apparently made little effort to understand the family he had joined; he bluntly identified things he was unhappy with, such as a litter box odor in the family room; and would settle for nothing less than extreme changes in their lifestyle. It actually was the biker who emerged as the episode’s hero — to his own family as well as to the environmentalist’s wife and children. He patiently adhered to the family’s existing routines (making occasional barbed asides to the camera) and tried to figure out specific ways in which they would benefit from his lifestyle and values. The children learned to appreciate junk food and amusement parks, while the uptight mother discovered her “wild side” by wearing leather biker gear and waitressing in a biker bar. Then, when the biker arrived back home at the end, his previously distant stepdaughter suddenly loved and appreciated him, thanks to the horrible experience of living with the environmentalist. Perhaps we’re all either normal or crazy after all? We do tend to live by the stereotypes we’ve selected for ourselves — based on desire and need to fit in — but these seldom hide more basic personality traits.

People like the ones featured on spouse-exchange shows really could be part of my everyday life. In fact, they are. In fact, whenever I watch these shows and ponder the lessons learned, I think of my colleague Bonnie Peterson — someone I consider an ideal potential participant in one of the spouse-exchange shows, especially since she’s such a fan of them. A year or so ago I found out that Bonnie and her husband Joel were Survivor “addicts.” So I asked her if they also liked Wife Swap and Trading Spouses. Her look of (feigned) affront led me to think that perhaps she hadn’t yet heard of these shows. She was intrigued with the premise I explained, though, and told Joel that evening. They immediately took to these programs, and now all three of us watch them regularly. 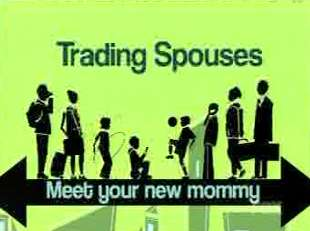 Bonnie hardly seems like a biker or a fanatical environmentalist or any of the other “types” I’ve seen on the shows — but then, unlike the other people I’ve watched on the shows, I know her already. She is someone with some very pronounced personal attributes that would serve the publicity needs of spouse-exchange shows. These surely would cause people who had never met Bonnie to predict a certain outcome, especially if the family pairing were done with the cunning I’ve seen recently. Yet Bonnie’s underlying personality (and Joel’s as well) would quickly draw attention from those features and provide interesting, even engrossing, substance for an episode. Bonnie teaches in my department. She also chairs the Academic Staff committee on our campus — a major responsibility. Before becoming a college teacher, she worked in the non-profit sector, including as a state-level policy analyst on issues related to the blind community. Bonnie herself is blind. Overall I would describe her personality as energetic, outgoing, and forthright. I don’t know Joel very well, having only met him once or twice. He is a former police detective, whom Bonnie describes as self-disciplined and “very conservative.” Bonnie and Joel live with three very large dogs — which she thinks would be one of the biggest challenges a “new spouse” would face in her home.

Actually, it turned out that Bonnie and Joel had already been speculating about the experience of being on a spouse-exchange show. I obviously had my own ideas about their qualifications, but decided to let Bonnie speak for herself on the subject. Bonnie says she appreciates the shows at different levels. She is the first to laugh at the extremes, and she emphatically repeats dialogue from pivotal points in the episodes (such as those selected for promotional teasers). But she also thinks there are a lot of positives in the shows. She explains that, “The negative examples lead to the positive examples…. Seeing people’s errors helps you to see that you shouldn’t be so extreme, and seeing what really good they’re doing for people is kind of nice. It’s amazing how they blend people.” Bonnie even speculates about ways in which the generation represented by most of her students has been influenced positively by watching reality TV, explaining that they seem more open than her own (baby boomer) generation to discussing personal and family problems.

When I asked about her applying to participate on one of the shows, Bonnie first made it clear that she no longer has children living at home — which she sees as a significant factor in getting one of these gigs. Somehow she didn’t seem convinced that this would necessarily preclude her participation, though, so I pushed it a bit. “What if they did an empty-nesters episode or something like that?” I asked, and here’s some of the conversation that followed:

Enough emerged in this conversation to confirm my notions about what the television audience generally would get from watching Bonnie and Joel.

Being personally acquainted with a “picture perfect” spouse-exchange candidate, and having some ideas about the surprises she and her husband would offer the television audience, lends new perspective to this sub-genre of reality television — perhaps even to reality television in general. I still prefer fictional dramas in which the surprises are planned and positioned by skilled writers. But I am starting to appreciate the new type of program discussed here as well. As Bonnie points out, not even the most narcissistic and conditioned spouse-exchange “wannabe” can prepare him or herself adequately for the surprises, conflicts, and stresses of trying to fit into an unfamiliar family. And while spouse-exchange producers enjoy the privilege of being able to have the raw footage from the exchanges edited so as to bring out a storyline with heightened drama, they still can’t entirely predict what they’ll have to work with. Old-fashioned fictional television drama can be so very predictable by comparison. If outstanding dramatic writers are hard to come by these days, and riveting television dramas fewer and fewer, perhaps spouse-exchange shows can help keep me close to my small screen.

Postscript: It might be a while before Bonnie and Joel get to participate in a spouse exchange. One area family already is appearing on Trading Spouses on January 6 and 13. Interestingly, one of their stated reasons for self-selecting was that they were just a “normal family,” not an extreme. We’ll see…. Read about them in the Racine Journal Times.