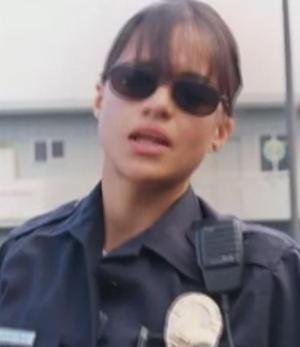 As a result of the research conducted for this column, I now have super powers. I can see into the future of television, telling you who will win The Amazing Race, what will happen in January on Lost, and how Arrested Development plans to leave Fox in a blaze of self-reflexive glory. (I promise, though, not to divulge details).

In my last column, I wrote of the previews and hype about shows circulated by the television industry, discussing how we interact with programs before even watching them due to these industry-designed pre-texts. However, it’s not just Hollywood who gets to play this game, as viewers too are releasing information gleaned from leaks from cast or crew; reports from the set by passersby, fan pilgrimages, and sleuthing trips; and sheer textual detective work. This is the world of the “spoiler.”

Many fansites on the Internet have sections for spoilers. Usually carefully cordoned off with threats such as “Spoiler Warning!!!! Do NOT go further if you do not want to know what happens,” these areas grandiosely announce their Pandora’s Box nature. Meanwhile, standard etiquette dictates that outside of these sections, all spoilers must be gratuitously labeled, followed by numerous blank lines, so that the eye cannot betray its owner by glancing down the screen, hence “spoiling” the narrative to come. Indeed, there appears something very pornographic about spoilers, and such rules and etiquette show the degree to which they are similarly seen as holding significant power to corrupt on mere contact and the degree to which many consumers are still guiltily smitten by and drawn to spoilers.

Spoilers may not ultimately attract as many online viewers as does pornography, but spoiler discussion forms a major portion of many popular fan sites. Television Without Pity’s Lost board hosts a spoiler thread (from which I get my title) with, at last count, 316 pages of text; TWoP’s Amazing Race board has a 300-page spoiler thread; while other sites, such as Lost-TV, have literally thousands of posts and boast hundreds of thousands of pageviews. Certain programs attract more spoilers, notably, those that thrive on keeping their readers in the dark, such as Lost, Veronica Mars, and competition reality shows, but even sitcoms and quiz shows have their spoilers.

Part of the appeal behind the consumption and production of spoilers would seem to be play with the narrative delivery system. To put it simply, this system posits an Author who knows, and a group of readers who don’t. Those who hate being spoilt are quite often those who are happy with this relationship; but clearly the system irks the spoilt. Spoiling is all about knowing. To some spoilers, the experience would seem akin to the pleasures felt by video game players who find cheat codes that allow them, for instance, unlimited ammunition. Video games can be devilishly hard, their puzzles irritatingly addictive, and cheat codes allow early gratification, and a pleasurable end to the pleasure-agony of not knowing how to solve the problem. Similarly, spoilers offer a pleasurable end to the pleasure-agony of not knowing what will happen next, what the Hanso Foundation is, or who wins next week’s leg of the race. To know what happens is a small victory, and a pat on the back.

As the size of some spoiler sites suggests, there is clearly a huge social element to this knowing too. Rather than exploring the text alone, thumbing it on all sides for the secret latch, spoiler sites allow what Henry Jenkins, following, Levy, calls “collective knowledge” (2002). Moreover, cultural capital can be earned or lost by knowing more or less, whether online, or in the smug contentment of the living room. As such, this need to know is both collaborative and competitive. 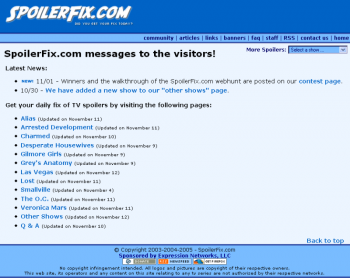 Beyond analyzing their appeals, though, I am fascinated by what spoilers tell us about the individual’s or group’s interaction with the text. After all, spoilers effectively allow viewers to read, decode, and interpret a text before it’s even got to them. Spoilt viewers can experience a text’s effects before broadcast, and can also, therefore, profoundly muddle up the phenomenology of the text, especially a well-written serial text. Good writers often “trick” their audiences, calling on us to react in one way, then adding new information that changes the ground rules. Spoilt viewers, though, can immunize themselves to such strategies.

Meanwhile, there is also the case of the false spoiler. For example, last year, a poster by the name of Old Scooter Dude began leaking information about Lost‘s season finale at Lost‘s spoiler board. Old Scooter Dude became something of a cult figure for a while, with some posters even speculating as to whether he was Lost star Jorge Garcia. But come season finale, he was proven a sham (resulting in his immediate expulsion, per community rules, from the board). Pre-excommunication, though, Old Man Scooter managed to throw the narrative off significantly for his (truly) spoilt subjects: using his bogus facts, they decoded all manner of events, characters, and themes in the lead up to the fateful revelation, only to have these all thrown into disarray. Instead of being episodes ahead, then, they were episodes behind.

Or in another instance at the same site, it was revealed what the show’s mysterious “French Lady,” Rousseau, was on the island to study. By all accounts, the spoiler came from an actually shot scene, and thus was completely legit — but the scene was then cut, with no subsequent allusion to the research. How is the spoilt viewer to make sense of this? Does this mean simply that writers Abrams and Lindelof decided to withhold that information for the time being, or does it mean that they changed their minds? Clearly, such examples show how spoilers can confuse the viewer. But they also show how the text has truly moved beyond its textual body, existing across all sorts of media. John Fiske called such intertexts “secondary textuality” (1989), while Will Brooker (2001) dubs them “overflow,” and although both terms are helpful, spoilers such as this offer something quite primary, and would seem to start the flow as much as they continue it. This one cut scene potentially answers many of the island’s, and hence the show’s, mysteries, allowing us not only to go back and make sense of past episodes, but to make significant sense of episodes-to-come.

Spoilers, therefore, also suggest something not only about our capacities to interact with and interpret texts before we actually receive them, but also about the significant pleasures in doing so. Much work into textual pleasure (logically enough) focuses on pleasures during or after the encounter, but the pleasures of anticipation, and pre-decoding can prove themselves just as strong to many. Certainly, reading through spoiler sites, it is hard not to conclude that many spoilt fans enjoy the experience of the text at the level of the spoiler significantly more than they claim to enjoy it when it is actually on the television in front of them.

Personally, I prefer not to be spoilt. But (and frustratingly so), many of those close to me love to be spoilt. And it is sometimes odd, therefore, to watch an episode with such creatures. While I am entranced by the narrative, waiting to see what’s next, they are either watching me for their enjoyment, or searching the text for other things: for character complexity, for cinematography, for minutiae. Much the same way that a repeat viewing of Seinfeld or The Simpsons allows that layered reading, spoilt viewers can make end-runs, so as to experience those aspects of the text in the first reading, while covering the narrative in the pre-reading.

Perhaps it is ultimately fittingly ironic that with the industry saturating everyday life with hype and overflow, many viewers are interacting as (or more) meaningfully with rumors of the text as with the text itself.