TV Revisiting TV: Why TV Does the “Remake” Better than Movies Do 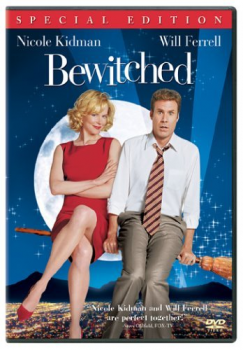 This summer I had the great misfortune of paying money to see the remake of Bewitched on the big screen. Normally I don’t take to filmic versions of TV shows, or even continuations of TV shows in my local theater (a la The X-Files, Serenity). My primary reason has been that since Hollywood remakes of films rarely work, why should I trust the industry to remake a TV series? Still, I had hopes for Bewitched (Will Farrell, Nicole Kidman, Nora Ephron — and a robust original source). I was sorely disappointed (an assessment clearly shared by Amy Sherman-Palladino of The Gilmore Girls, who has been skewering Ephron’s film this season every chance she gets).

“Remakes” are nothing new in the world of TV, either — but the “re-making” we see tends to be of a different sort than what occurs in film. Occasionally we do indeed get the literal remake (Night Stalker), but more often we get one of three versions of the remake: 1) the quasi-rip-off (Invasion=Lost, kind-of-sort-of with aliens; Commander In Chief=West Wing, kind-of-sort-of with a woman), 2) the second cousin (all versions of CSI, Law & Order), and 3) the re-visitation (The X-Files as a spin on and re-examination of the original Night Stalker — which raises the interesting conundrum of whether the current Night Stalker is a remake of the original, or a re-visitation of The X-Files‘ re-visitation).

I lay out these trains of thought because I would like to examine how it is that TV is able to do just about any kind of the three remakes above more successfully than Hollywood films do TV remakes (in general — did like The Brady Bunch movie and the first Charlie’s Angels, and all things Muppet-related tend to rock) — and why does Hollywood even try? To begin with, let us put aside the “crasser” reason of Hollywood going after old TV shows for reasons of profit, since television certainly engages in this logic as well. Good reasons still exist for remaking a TV series (or an old film, for that matter): the original sucked but the premise showed promise; the original left something significant unsaid; or the driving force behind the original premise remains or has returned. These reasons often converge historically, making room for the successful and purposeful remake. Thus, I politely disagree with one of Owen Gleiberman’s explanations for why the movie Bewitched failed: “When you strip it [a TV show story] away from its era…what you’re left with is the premise without purpose” (“The Big Screen Gets Small,” Entertainment Weekly. #844/845, October 14, 2005. 27-29). While Bewitched the TV show certainly was a distinctively 1960s show, the central force driving its premise remains with us today: women still live with a cultural pressure that encourages them to “hide their true powers” — especially when attempting to become romantically involved with a man. While this pressure is nowhere near what it was in the 1960s, nor is it of the same kind, it is a pressure many women can relate to that might have been successfully translated into the movie remake.

Or perhaps the problem is that many in Hollywood still don’t “get” TV…More precisely, perhaps it is that films, with their roughly two hour limitation, cannot recapture what it is that any TV show does best: capitalize on the advantages of the series aesthetic. Gleiberman offers this explanation when he points out that viewers don’t seem to be clamoring for big screen versions of those shows that have been most firmly wed to the series aesthetic of slowly building character and story (he mentions shows such as Mary Tyler Moore — and ironically Dallas, which is being talked about as a movie now). These aesthetic elements exist at the very core of TV as a primarily series-driven medium, and they allow for the time and room necessary for a successful remake of an earlier show. It appears that, still today for some, TV is the “bastard child” of film — seen as simply “smaller” and therefore less sophisticated in what it might achieve. Certainly a film can do it better! This, as Gleiberman astutely observes, misses the point of TV for many viewers: “Our whole relationship to a dramatically rich and vivid television series, the way that we live with the characters for 5 to 10 years, their quirks and wrinkles deepening week to week, isn’t really translatable to a movie” (29).

While I could speak for ages about how often cultural critics miss this key element of TV (we all, I am sure, have heard the two famous lines “well, I haven’t seen it, but…” and “all I needed to see was one episode to know that…”), I would like to instead look briefly at two current TV shows’ version of the remake, inviting discussion about whether or not you agree that these are successful — and perhaps if there are other remakes out there we have not caught onto just yet. I will start with Bewitched. Yes, that’s correct — Bewitched. Beginning last season with the episode “Anything You Can Do,” in which Lynette (played by Felicity Huffman) attempts to help her husband with his ad campaign, I do believe we have been watching Desperate Housewives revisit Bewitched — at least with this one character (and with the nosy neighbor). Lynette gave up her powers (at the ad agency) for the sake of home and husband, but clearly she is itching to wiggle her nose and get back to work (paid work, that is). And indeed, this season to-date has focused on what happens when she returns to the work force and her husband Darren (sorry, Tom — equally bland) has to keep an eye on the kids. Such plotlines could not have been fully broached in the 1960s — we could only occasionally see Samantha try her hand at an advertising gig in lieu of her husband — and it appears that viewers today find the questions such a trajectory raises compelling. The slow unraveling of plot and characterization at work in a series such as Desperate Housewives has the potential to add nuance and detail to the issues of being a talented woman who is married with children in a way that two hours of campy film cannot.

The second remake I see at work is nicely doubled. While Malcolm in the Middle is still on the air, there is a slight remake/quasi-rip-off going on with Everybody Hates Chris. Compare the two pilots if you don’t buy this, but even thematically the core is similar: one child of three enters a new school situation because of a mother’s desire for his education to improve; he becomes friends with an outcast and he is an outcast himself. The more intriguing remake at work in this show, however, is the manner in which it is a re-visitation of The Cosby Show. Now, The Cosby Show hardly sucked the first time, but the other two reasons for a remake I listed earlier are at work in Everybody Hates Chris. One of the central forces driving The Cosby Show was the general issue of the status of race relations in the U.S. during the 1980s, which included White people’s perceptions of Black people. However, The Cosby Show also left many things unsaid about being Black in the U.S. (and especially specifically in the New York City area) in the 1980s. This is not to say that The Cosby Show failed or that it “should have” said everything. TV has generally been good (sometimes to a fault) at giving viewers as much as they can handle. I am simply observing that Everybody Hates Chris — set in the New York City neighborhood of Bed-Stuyvesant during the 1980s — is revisiting the socio-cultural landscape of The Cosby Show, saying some of what was left unsaid. In this story we see the glaring discrepancies in school funding that existed across racially segregated school districts (an issue that resonates as well today); we see some of the realities of racial tensions in the New York City area that caused havoc for people living in that region (and eventually beyond) in that decade; in short, we see much of the racism and correlated class issues that existed right outside the Huxtables’ brownstone. It’s a story worth revisiting, in my opinion — and worth revisiting in a series specifically. 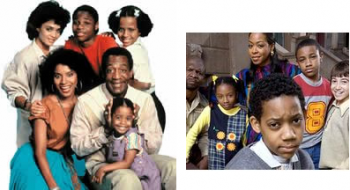 (l) The Cosby Show and (r) Everybody Hates Chris

Critics of TV are often quick to complain that “all” TV does is recycle what it has already accomplished. And I am the first to whine and moan when a new show does so unsuccessfully (or a film for that matter). But it is worth considering the possibility that some ideas and situations need to be revisited in order for TV to continue to operate as a cultural forum. We humans often prefer that stories which make us uncomfortable remain untold; we often need time to have passed in order to examine our shared situations (witness M*A*S*H). The successful remake can help us in this regard — and can keep us from ignoring when difficult socio-cultural currents have re-emerged. The series aesthetic is especially well-suited to such “examinations through entertainment.” While film can do much in this regard as well (watch Stand By Me followed by Boys in the Hood), some things just might be better left to TV.

2. (l) The Cosby Show and (r) Everybody Hates Chris