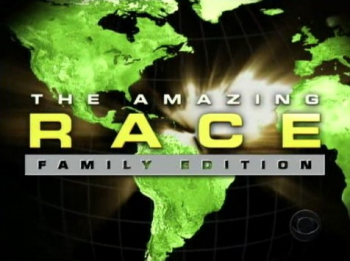 I must begin with a word of thanks to my oldest brother Chris, for without him I might never have watched The Amazing Race (TAR), let alone become a fan. You see, about a year and a half ago he started telling me about this great reality show where people travel all over the world and that I simply must watch it. Given that my brother is a world traveler himself (at time of writing he’s been to over fifty countries and more than 700 airports), I could understand why he’d want to watch such a show, but I just wasn’t that interested, and so ignored his recommendation the first time, and the second time (and the third, and so on). But eventually I grew weary of hearing “So have you watched it yet?” every time I talked to him, and finally gave the series a try with the premiere episode of the sixth season. I haven’t missed a show since, and caught up on the rest of the series thanks to GSN reruns.

So yes, I’ll admit it, my brother was right. I am now an avowed fan of the show, though I’m not typically one for gamedocs or competitive shows, and view most reality series as guilty pleasures rather than quality television. Accepting this reluctant path to fandom prompted me to consider just what it is about TAR that makes it so compelling, and why I’ve become just as annoying as my brother in urging others to watch it. Formal innovation has been one key to the series’ critical and commercial success, but without pre-related teams, the show could have ended up as some bastard child of Survivor and Planes, Trains, and Automobiles instead of an Emmy-collecting powerhouse. I address formal elements and teams in turn.

The Amazing Race skillfully melds gamedoc, docusoap and travelogue. Its premise is, as with most gamedocs, delightfully simple — whoever gets there first, wins. Along the way are the requisite arbitrary challenges and regionally-themed roadblocks, end-of-leg rituals, and elimination twists. The series is shot in a docusoap/day-in-the-life style, where cameras are always present but rarely if ever acknowledged. Breaks in the otherwise invisible, mobile surveillance endemic to reality series shot in uncontrolled environments do crop up in TAR from time to time (most notably in shots of crowds and passers-by understandably gawking or smiling at the camera), but for the most part the show is masterfully edited down to what appears to be a seamless retelling of the race. These gamedoc and docusoap elements are then situated within a travelogue visual style that offers viewers every kind of voyeuristic perspective imaginable, from the air to the sea, from the street to the tops of skyscrapers, from static pre-shot sequences to the real-time teams’ views of the passing landscape. The cohesive amalgamation of these varied formal elements, each present in equal measures, allows for numerous points of entry into the series.

That said, what ultimately makes TAR such great TV are the teams and the team dynamic. Instead of individuals, TAR pits teams (of two) against each other. The significance of this construction of competitors emerges not from number, but rather from familiarity — the team members are all closely related in some way, whether they are friends, couples, siblings, or parent and child. The importance of these bonds cannot be overstated, as these pre-constituted alliances elicit far more drama than ones that are arbitrarily or “organically” crafted in front of the camera as on numerous other reality shows. It is one thing to see people who have known each other for days cohabit, argue and bond, but quite another to see the same from people who have known each other for years or even decades, and to witness it all happening while they are on a manic race around the world, plopped down in unfamiliar locales and situations and chasing the unknown on a daily basis. When situated within the formal context described earlier, the processes of relationship strengthening and breakdown constantly on display serve to create a more believable constructed reality narrative than in most other series, one that has more in common with serial drama than game show. The relationships between team members (as well as between teams themselves) produce a number of intertwining plots and sub-plots, as well as a host of identificatory scenarios. 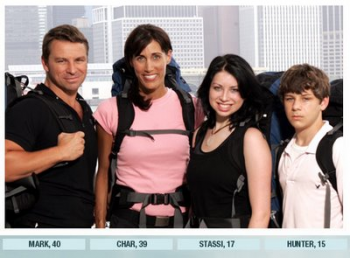 The Schroeder Family from Amazing Race

It is these sorts of scenarios that I find even more fascinating in The Amazing Race: Family Edition (TAR: FE), and unlike many critics and fans, I think the introduction of a four-member, “family” team dynamic proves a nice twist on the series’ format. As a fan, I too lament the preponderance of race legs within the United States, and the contestants themselves have seemed annoyed by the amount of time spent in America this season — as matriarch Marian of the recently-eliminated Paolo family put it, “What the hell are we going to Phoenix, Arizona for? I want to go to New Zealand!” Still, even without the exotic locales, TAR: FE still has much to offer in the forms of interpersonal drama and viewer identifications. It does for me, anyway. For example, from the comparative lack of travel has emerged uncomfortably accurate portrayals of family excursions in America, such as of the ubiquitous road trip replete with missed exits, pointed bickering, random discussions, and instances of utter boredom. As I’ve traveled through and to nearly thirty states on road trips with various family members over the years, I found myself alternately laughing and cringing at the automotive escapades that dominated the first part of this season. Resonant scenes abounded – getting lost in New York, angry driver switches, knowing button-pushing, even coping with loss.

TAR: FE also successfully articulates the multiplicity of relationships within families (father-mother, father-son, father-daughter, mother-son, mother-daughter, big sis-little sis, big bro-little bro, brother-sister, sister-brother, father-son-in-law) and their often-uneasy coexistences. As the youngest of seven, I am all but too aware of these, but never have I seen so many of them represented on one show! This season offers up myriad examples of the imperfect nature of familial relationships, of power struggles and favorite-playing, of how conflicts between two family members still impact those not involved. Occasionally these types of direct conflicts — such as the scream-fights between Marian Paolo and her son DJ — are quite difficult to watch, but they speak a mediated truth about the frustrations of blood relations. Thankfully, what also emerges from these representations of family dynamics is a curiously inevitable solidarity. No matter what transpired during a particular leg, all of the families come together on the mat at the end, appraise their performances, and reaffirm their bonds in an earnest, upbeat coda. Of course, this is a false, televisual coda, since the race is not yet over and the next episode will surely produce yet more conflict and interpersonal drama. Yet each episode’s progression from one end of the family love-hate continuum to the other satisfyingly mimics the repetitive nature of familial relationships.

I find pleasure in other aspects of this season’s race, such as how teams have fashioned snarky, televisual nicknames for each other (Cleavers, Desperate Housewives). (I also find myself annoyed by the Weavers’ tiresome invocations, some suspect clue-box site choices (the World’s Largest Office Chair?!?), and increasing numbers of product tie-ins.) I initially got hooked on The Amazing Race by the competition and the travelogue, but while I would like to see the families cross one of the oceans sometime soon, I’ve realized that I no longer care who wins. What has kept me glued to CBS on Tuesday nights this time around is not the race at all, but the cacophony of familial dynamics and their, well, familiarity. Each week I am reminded of one or more of my many, many family members and various situations we’ve muddled through, and I inevitably end up thinking about and honoring those in my life and in my heart long after the credits have rolled. All that just from a silly reality TV show.

2. The Schroeder Family from Amazing Race