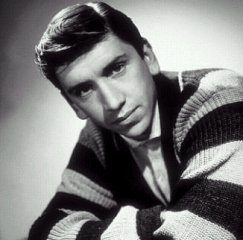 When Bob Denver died recently, I was reminded of talks I gave a few years ago, in which I discussed the Fonz as the dominant representation of a Fifties youth subcultural figure on American television. Inevitably, during the discussion or afterward, an audience member — always a male Baby Boomer — would ask, “But what about Maynard G. Krebs?” That is when I discovered that I was not alone in claiming Maynard as an early cultural hero, as thinking he was the coolest character on American television until, I don’t know, Emma Peel came over from Britain.

Denver may be more famous generally for being Gilligan, but he first came to notice as the best friend of the title character in The Many Loves of Dobie Gillis, whose first run aired from 1959-63, and continued in repeats for a few years more (and which later popped up during the Fifties revival in the 1970s, and on the retro cable channels of recent years). Maynard was a teenage Beatnik, full of unconventional ideas and language. Although still in high school, he wore a goatee, played bongo drums, and recited poetry. He would name-check poets and jazz musicians, and scat while walking down the block. In the middle of the numbing middle-class milieu of the show, with the other characters wearing pressed slacks and dresses (and a young Warren Beatty even better dressed for one season), Maynard wore jeans, sneakers and an old sweatshirt with the sleeves cut off and holes in its front. Maynard hated work, had no material ambitions, and was decidedly anti-authoritarian, with a particular phobia for the police. While not as threatening to the Fifties social order as the violent juvenile delinquent or the sexualized bad girl — who rarely appeared on American screens after the demise of the live drama anthology shows, and never as continuing characters — Maynard decidedly went against the flow of adult preferences for youth values and behavior.

As the greatest source of social disruption on the show, Maynard was often the catalyst for episode plots, with the other characters allied with or opposed to his unconventional behavior. His stance was essentially juvenile to the point of childishness, and he excelled at poking holes in accepted norms with the untrammeled reasoning of a small child, appealing to a purer moral sense in his associates than they usually showed in the routine of high school life. Maynard supplied the show’s fantasy principle, evoking a world of simple but fulfilled desires, and no responsibility beyond altruism. Maynard’s opposites were a succession of rich snobs, as well as Zelda, the no-nonsense girl who adored Dobie while embodying the reality principle. Dobie was positioned between Zelda’s good sense and Maynard’s idealism, continually trying to reconcile the two, as he acted the roles of dutiful son and regular guy while resenting their constraints. (Thalia, played by Tuesday Weld, was the unavailable dreamgirl Dobie wanted instead of the plain Zelda, embodying a different sort of fantasy principle.) 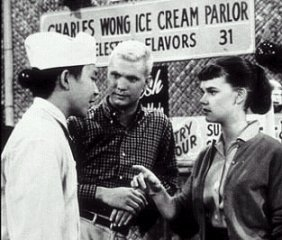 Of course, real followers of the Beats hated Maynard. Fans of Ginsberg, Kerouac, and Monk were not likely to be prime television watchers, and reacted with the derision typical of subculture reaction to broadcast characterizations of distinctively non-conformist types during the 1950s and 1960s. To Beats, Maynard was a silly, superficial, stereotyping insult to their challenge to orthodoxy and search for meaningful experience. It was indicative of television’s blandness at the time that Maynard, essentially innocuous, could stand out as a noteworthy challenge to the status quo. But to young viewers in the suburbs with only a dim understanding of Beat culture, gleaned completely by mainstream coverage of the movement, Maynard became an accessible symbol of rebellion. While the detectives of 77 Sunset Strip also flirted with jazz and hip lingo (which did not keep them from maintaining the social order), Maynard’s placement in school life and his child-like view of the world provided a much closer proximity to young viewers’ experiences. We could admire the detectives, but we could see ourselves as Maynard.

Beat influence on youth culture waned by the mid-60s, but lived on indirectly through its legacy to hippiedom. As the hippie culture faded in the 1970s, so did the notion of Beat fans as prototypical youth rebels of the late 1950s. Maynard was replaced by the Fonz, as the greaser became the dominant image of Fifties youth. The greaser’s association with rock and roll, car culture, and macho assertiveness eclipsed the Beatnik’s fandom for jazz, poetry, and Eastern mysticism. Young rebels periodically have rediscovered Kerouac, Burroughs, and Ginsberg, but the main Beat connection to youth culture that has survived the Sixties has been drug use. As alcohol (the greaser high) re-entered youth culture, marijuana, one of Beat’s drugs of choice, maintained significant popularity. It was nice to see that Bob Denver retained some of Maynard within him, getting busted for pot in his 60s. And it was nice to learn that Maynard had not been forgotten, but lived in the memories of Boomer boys everywhere.