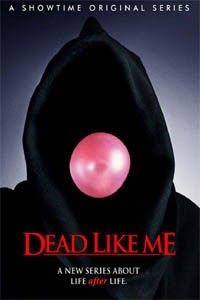 Dead Like Me
George: Well, I want my life back!
Betty: It’s not like you were doing anything with it.

Mondays, 7.30pm: everyone in Australia knows that’s the time for Desperate Housewives. At my house we’ve been trying to give ourselves to this hot new series, and it certainly does have bright sets, a polished ensemble cast who show the right balance of allure and repellence, the promise of secrets to be revealed, cruelties lurking beneath. And a dead leading character.

But it’s slow, and that polished look sometimes just says “look at the money on the screen,” which flatters the production system, not the viewer. In fact Desperate Housewives feels more like another episode in the long slow death-wish of American TV.

So while my partner is out of the room, and the three girls are watching it on the other telly upstairs, I find my attention drifting and hit the “booper” (the remote). In Australia Desperate Housewives is on free-to-air Channel Seven, currently resurgent in its ratings battle with arch rival Nine, not least because of this very show, together with some other high-profile buys from the US like Lost and 24.

Unlike the majority of Australians we subscribe to Foxtel (cable TV). The channel that sits between Seven and Nine is Fox8. Fox8 has its moments — early America’s Next Top Model being one of them. So it didn’t take much commitment to “boop” from Seven to Eight, but that’s as far as I got.

What is this? That delicious TV rarity, something that you can’t “place” in a millisecond. Coming to it cold, Dead Like Me did not make a bit of sense, to such an extent that we decided — partner was back now and not missing the Desperates — that it must be Canadian. So we watched it, just long enough we thought to figure it out before going back to our Housewives duty. But we never made it back.

Our family (two parents, three teenage girls) generally doesn’t eat or watch TV together. But Dead Like Me achieved that minor miracle. Week by week, the girls drifted in while it was on, and we ended up in a row like the Simpsons on the big yellow sofa, sometimes — it being what passes for winter in Australia — all snuggled under the one doona (quilt). We began to look forward to Mondays. So now, here’s another rarity; family communion, celebrated at the altar of “George” (Georgia Lass, played by Ellen Muth) — a teenager who’s dead, killed unglamorously by a toilet seat crashing to earth from Russian space-junk Mir. How useless was that, seems to be the story of her life, now that it’s over.

We all agree that Ellen Muth is “drop dead gorgeous.” But it isn’t just that. Her expressive face catches perfectly the bemusement and frustration of her character’s situation. Then there’s the deadpan humour, the fact that she says “fuck” a lot, and the inexplicable scenario and plotlines. We like her blue coat too.

It took a while to learn the internal logic of the series — how being dead worked, especially as the five main characters (all dead) interact at will with the living, even to the extent of Our Heroine losing her virginity to one of them. We had to understand George’s two workplaces: the diner where she picks up her post-it assignments from taciturn boss-reaper Rube (Mandy Patinkin), and the Happy Times temp agency, presided over by Dolores Herbig (Christine Willes), who suffers from terminal perkiness.

There’s an excellent ensemble cast of really strange characters, each of whom requires attention before you “get” them. At first all this seems united by little more than Ellen Muth’s really terrific voice — her character is narrator as well; somewhere between dead Desperate Mary Alice Young (Brenda Strong), and Clarissa Darling (Melissa Joan Hart), who once “explained it all.” The timbre is a gravelly contralto, somewhere between teenage “fuck-you” and Lauren Bacall’s line from To Have and Have Not: “You know how to whistle, don’t you?” 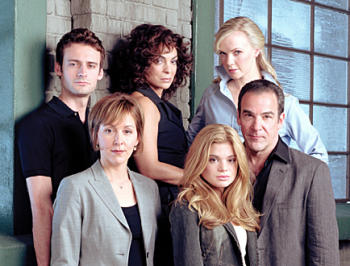 Over the weeks Dead Like Me slowly resolved into sense, revealing itself not to be Canadian at all, even though it was shot in British Columbia. Part of the attraction is that it is not like American TV as we’ve come to expect/dread it, even though it’s playing around with a very familiar genre (teen-angst sitcom) in a very familiar bit of the zeitgeist — have you noticed how many dead people there are on TV these days?

Its textual pleasures are to do with freshness and unexpectedness within a format that audiences want to see disrupted a little; “jaded” humour (as my daughter puts it); script-led drama; taking the piss out of sacred cows (death, mothers, spirituality). It has insights into both family and work situations (sitcoms usually choose between these). Georgia’s mother is far from being a sympathetic character (teen sitcoms usually delete/idealise these). Creator Bryan Fuller knows his craft but is also audacious.

There’s quite a bit to say about it, but it is well covered in the review, fan and feedback sites, so why not browse them directly:

Anyway we like it and we’re currently watching it through to the end of the second series, which has been playing on Foxtel in Australia (and also on Sky in the UK) over the past few months. For us it’s new.

But in fact, Dead Like Me is already dead. It was made in 2003 and 2004; two series on Showtime and then cancelled. In the American market, almost the most interesting thing about it was that it was not on HBO, nor was it Six Feet Under.

Which raises another issue; the question of life after death not for characters but for TV shows, for TV itself. Once upon a time you watched broadcast shows when they were on in your country and then they died. But that’s no longer the case. There are ways to keep in touch with them, dead or alive.

First, we had to go through our “toilet seat moment” — the one where we discovered that this show we’d just fallen for was already dead in the USA. The experience of watching it changed right away — knowing that there was a finite number of episodes meant that the characters could only develop so far. Now there was no chance that Dead Like Me would be recognized for what it is and enjoy a shift to free-to-air prominence, ratings glory and umpteen seasons. It would never become Desperate.

On the other hand, it did enjoy plenty of post-broadcast action. The web yielded many interesting sites on which one can follow its afterlife, as well as those of its creators, cast, consumers and competition. We soon learnt that creator Bryan Fuller went on to do Wonderfalls. That was cancelled after only four episodes, despite 13 having been made. It went on to posthumous glory on DVD and global pay-TV channels.

Not surprisingly, both seasons of Dead Like Me have also been released on DVD. Lots of folk think as highly of it as we do. You can read their comments on many sites, from Amazon to IMDb, and you can even sign a petition to MGM (who own it) to get it back. Last time I checked there were 47863 signatures.

Following this show has been like modeling what it means to “watch TV” these days. It is not an of-the-moment experience in real time, not live, not even broadcast. You have to “sit up” not “sit back” — enjoyment becomes less snuggling under the doona, more like working on the computer. It just goes to show how far TV has evolved from the broadcast era.

But some things have not changed, among them American corporations. We tried to order the DVDs, feeling mildly pleased that they cost only US$75 (down from $99) for both seasons. But we found they’re encoded for DVD Region 1, and we live in Region 4 so there’s no point ordering them. Then we tried to get them locally, but the suppliers don’t yet stock this DVD. Just to rub it in, when we went to the Showtime website to find out more stuff about the show, we were greeted with this message: “Sorry. We at Showtime Online express our apologies; however, these pages are intended for access only from within the United States. You have requested data that the server has decided not to provide to you. Your request was understood and denied.” No wonder all the posts on the US websites are so rude about Showtime.

So — perforce — just until the final season ends, we can still enjoy sitting back and watching the show like a real TV family watching a real Brady sitcom. It won’t last. The DVDs will arrive, something else will come on Fox8, and everyone will drift away. It’ll be the end of TV as we knew it. You don’t know what you’ve lost till it’s gone.