This Week On Flow 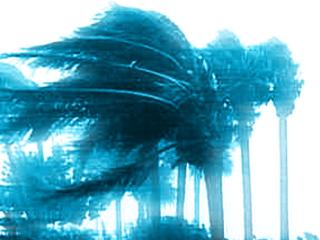 It is with heavy hearts and deep sympathy for the victims of Katrina that the editors of FLOW usher in our third volume. While we have experienced a rewarding, enlightening, and stimulating first year of publication marked by debate, commentary, and discourse, we recognize the relative place our little journal holds in light of national tragedy. Often, we begin our publication with an introduction to the current issue, reviewing and summarizing the content available herein. In the coming weeks and months, this tradition and others on this site will undergo considerable change. Rather than introduce you to our content, we prefer for the foreseeable future to introduce you to our opinions on all things televisual. As the new coordinating editors, Marnie Binfield and Bryan Sebok begin this tradition thusly:

The televisual marketplace renews itself each year as the leaves turn and drop from their lofty perches. New seasons of our favorite shows struggle against the untested upstarts of their generic bretheren. New sporting seasons vie with entrenched and concluding summer pasttimes for control of valuable demographic eyeballs. The networks struggle to compete with the ever pervasive draw of cablers. Each channel introduces new episodes or series, new generic forms or hybrids, new personalities or revived stars from bygone eras recycled into parodic shells of their former glory, in the hopes of producing that next big hit, that next new form, that next new phenomenon to challenge the supremacy of the American Idols and CSIs. It is here, in the realm of content, that we begin.

We would be remiss if we did not start by commenting on the wall to wall disaster coverage currently airing on CNN, Fox News, MSNBC, and others. Other media criticism sites have begun, in the past couple of weeks, to ask the hard questions about the media’s function, its bias, its goals, its commercial imperative, etc. in light of events on the Gulf Coast. What is the function of the media in society and specifically in regards to national catastrophe? To inform? To exploit? To connect lost relatives over the airwaves? To find and uncover corruption in federal agencies? To tell the harrowing tales of victims of natural disasters? To revivify long standing institutional and structural racism? These questions are particularly salient in circumstances, such as these, in which other communication technologies have utterly failed. Of course the answers are not easy; cable networks and media outlets serve all of these functions and more. Salon.com and others have pointed to the two now infamous pictures distributed by the AP, one describing an Anglo wading through flood waters with “found” groceries, the other of an African-American “looter” with groceries in tow as evidence of troubling trends in media discourse. 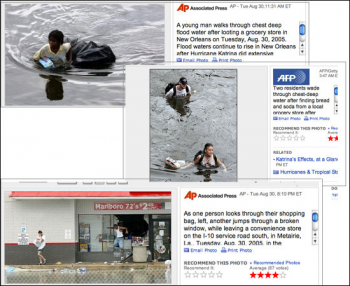 Of course, this disreputable form of media racism, along with Barbara Bush’s comments on the “improved” conditions of the poorest Hurricane victims, are examples of the worst our media and its personalities can offer. But what of the networks? Where have our network news divisions gone? Is it better to tell every tale or none at all? And what stories are pushed to margins as a result of this coverage? Where has Iraq gone? Rehnquist? And what of the best? What of the efforts of countless journalists to get into New Orleans, to help the victims and their families, to bring the Bush administration out of its vacation induced slumber to get emergency supplies to those in need?

What is it that glues us to such coverage? In the early stages of disaster coverage so many viewers sit awestruck, unable to attend to the minutiae of daily life in the face of such horror, such tragedy. As a nation we watch together and feel a sense of community, of our connectedness, and our interdependence. During this phase, the politicizing of tragedy seems irreverent, disrespectful, and cold-hearted. But, as the coverage wears on, such issues begin to surface as reporters and anchor people ask the questions and make the observations we felt too sad and sympathetic to ask and to make. And what is it that later forces us to tear ourselves away from twenty-four hour tragedy? The need to safeguard our own mental health? The need to step back and take stock and give thanks for each of our blessings? Slowly, we leave CNN and FOX for awhile. We watch college football instead. We watch sitcoms or music videos. We use television to create some distance, some distraction, some moments of mundane normalcy. We use it to feel part of other communities and of happier times.

With the first issue of this new volume of Flow we hope for the best in the recovery of New Orleans, the Gulf Coast and all of the survivors of that terrible storm. We offer this space for readers to share your experiences and thoughts on Katrina and media culture and thank you for being part of our community.