The Seeds of Doom? 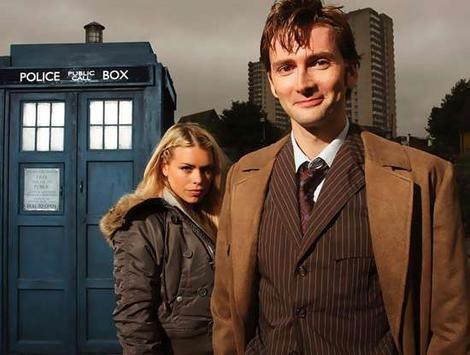 The BBC’s revived production of Doctor Who has been, by all accounts, a smashing success in Britain. Brought back to life on television after a fifteen-year sojourn in various non-television media forms, the series has captured sizeable audiences and copious media coverage to a degree not seen since the heyday of Tom Baker in the late 1970s. Writer-producer Russell T. Davies has managed to make Doctor Who (2005) simultaneously classic and contemporary, serving up equal portions of adventure, wit, and fear in lightning-paced episodes.

While the series has taken off in the UK, however, the official reception of the new series in the United States has been much cooler. Despite an otherwise successful global sales effort, and a fair amount of US fan interest, the BBC has not yet sold the series to any US television outlet, whether broadcast, cable, or satellite. US Doctor Who fans have been left in a holding pattern of sporadic announcements of “ongoing negotiations,” and rampant online speculation as to where the series might wind up. The only publicly acknowledged rejection of the series came in late February from the Sci-Fi Channel, who, according to reports, cryptically claimed to have found the series “somewhat lacking.” This phrase, which has considerably heightened fan anxiety, frames the overall debate about the new series, and highlights the gaps of media globalization, i.e., the cultural, economic, and legal boundaries that still exist between national media regimes.

“Boundaries” are structural issues (in both the theoretical and material senses), marking off categories. In this case, as with most others in global media, the key structures are distribution networks. While the legitimate, “official” network of transnational media trade has thus far failed to bring Doctor Who to the US, the illegitimate, “unofficial,” and rapidly growing network of online file sharing has provided the series from the get-go. High-resolution video files of episodes are posted online within minutes of their UK broadcasts, mostly via BitTorrent, the radically non-centralized file distribution method that has shifted peer-to-peer file sharing into a higher gear. Unlike older P2P systems, BitTorrent is designed for optimum network efficiency, actually escalating file-sharing speed as traffic increases. Users must “seed” (upload) and “leech” (download) bits of the same file simultaneously, producing a so-called “swarm” of data as dozens, or even thousands, of computers swap file parts. When coupled with increasingly ubiquitous broadband connections, BitTorrent can deliver gigabytes of data in a matter of a few hours. The much anticipated (or dreaded, from the perspective of the copyright industries) “Napsterization” of video data is here.

Thus, we have a significant differential between distribution networks: one functions through the long-established, top-down models of audience flow, media capitalization, and copyright, while the other simply serves up media on demand. In an era where this differential will only increase, it is worthwhile to understand the logic of each.

Television programmers across the planet value genre and predictability. That is, even in an age of otherwise diverse forms of television, programs should look, sound, and “feel” like established programs. Even something as iconoclastic as Lost still “feels” like a standard ensemble drama in its narration, characterization, design, and cinematography. The BBC’s failure to find a US buyer for Doctor Who, despite early courting before the series even entered production, and despite decades of BBC programs on US TV (including the original Doctor Who), is, as unlikely as it sounds, probably a cultural misunderstanding on these grounds. Accordingly, the Sci-Fi Channel’s alleged “somewhat lacking” comment can be understood in several different ways. From a US programmers’ perspective, the new Doctor Who is lacking in stable generic markers: it is simultaneously science fiction, fantasy, comedy, character drama, and social allegory. While this might not always be fatal (see Lost), the fact that the series is British (even more so than the original) further separates it from typical US fare. Both the Ninth Doctor (played by the Mancunian Christopher Eccleston as decidedly “Northern”) and his companion Rose (played by Billie Piper as a working class shopgirl), have quite specific British accents and demeanors that do not correlate with anything else on US commercial television at this time.

Ironically, these very factors which have thus far doomed the series in the US have arguably ensured its mainstream success in the UK. For example, the early decision to clothe the Ninth Doctor in black jeans and a beat-up leather jacket — rather than the usual “eccentric” Edwardian ensemble of frock coats, bow ties, and hats — is a clear attempt to create a contemporary, urban feel to the character. Similarly, the series’ language is not the “BBC English” of the original, but more modern and varied in its idiom and accents. The generic framing of the series as “family television” also aims for a specific, longstanding UK TV sensibility, as television that works at different levels, suitable for many ages. There simply is no counterpart to this formulation in the US, so the series is at once too chaste and playful for prime-time drama, and too arch and sophisticated for the likes of Nickelodeon. The fact that the series is shot not on film, but on standard definition video (albeit “filmized” in post-production), a format alien to US prime-time drama, is the icing on this particular aesthetic cake.

Moreover, Doctor Who is also almost certainly “lacking” any of the typical financial and proprietary inducements that abound in this post-Fin-Syn media world. While virtually every program on US TV has some sort of co-production, syndication, video distribution, or sponsorship arrangement as part of its package, the BBC wished to sell Doctor Who “old school,” as in: here’s the show. No co-ownership, no ancillary distribution rights, no product placement. No wonder it has yet to run here.

Meanwhile, episodes blaze across the Atlantic via the Internet in multiple forms every Saturday night (after their airing on BBC1). Given the sheer number of file-sharing options, precise totals are difficult to come by, but one fairly well-known BitTorrent tracker recorded roughly 50,000 downloads of each episode of the new Doctor Who thus far. However, the bulk of online TV traffic parallels the trajectory of most “legitimate” global media traffic: outward from the US. Studies released in the past six months noted the growing volume of television programs available online, and reached similar conclusions about its growing scope, particularly in the UK (which represents nearly one-fifth of global television downloading), Australia, and Scandinavia, where tens of thousands of copies of episodes of 24, Lost, The O.C., and Desperate Housewives routinely head right after their US broadcasts, months before their debuts overseas. While 40,000 downloads (to take a figure cited for the UK downloading of Desperate Housewives) is clearly dwarfed by the 4 million viewers who catch the series “legally” there on Channel 4, the trajectory of file sharing is clear. At least one European network, Norway’s TVNorge, has publicly claimed that downloading of US TV is costing them thousands of viewers on the episodes’ eventual broadcasts.

Studies of file-sharing also routinely take the copyright industries to task for fighting, rather than adapting to, the new distribution networks. This advice has been slow to penetrate the capital-entrenched practices of the media industries, who will likely continue to seek cultural, legal, and technological means to maintain their status quo. However, some major firms are taking steps towards the online, on-demand world. While US broadcast and cable networks continue to offer the same piecemeal level of online video content that they’ve had for years, the BBC is actively developing extensive online distribution networks. Each of their radio networks is available as a high-quality live stream, and immense amounts of past radio programs are available as archived streams and even podcasts. This approach is being adapted to the higher-bandwidth requirements of television programming. Indeed, live test streams of four BBC TV channels (including both terrestrial channels) were briefly available worldwide in April, and the BBC is developing an ambitious video-on-demand system that will take advantage of P2P technology.

The ongoing fate of the new Doctor Who reveals a great deal about the uneven “gears” of cultural globalization. The model of centralized audience flow still retains immense cultural, economic, and legal powers, but its authority in each of these areas diminishes with each new broadband account and BitTorrent tracker. What power will remain when media users no longer have to wait for the differences within the old distribution network to work out? Even the corporate marriage of content and distribution is souring, as the Apples, Sonys, and Googles of the world also challenge the old regime’s boundaries. Still, even in the emerging on-demand world, myriad conceptual boundaries will likely continue to produce gaps and differentials in the global mediascape. All media will still be “somewhat lacking,” somewhere.