“Roswell! Roswell! The People Have a Right to Know!”: The State of Fluff, part 2. 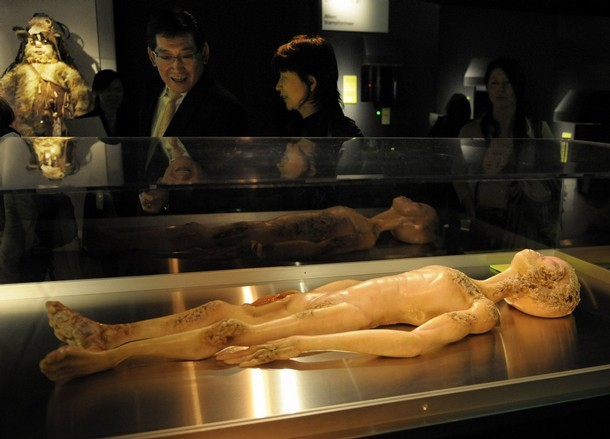 In The X-Files’ episode “Jose Chung’s From Outer Space,” these words are spoken by Blaine, an UFO enthusiast, as he grapples with a police detective trying to keep him out of the morgue where Scully will autopsy an alien. Mulder stops the altercation, inviting Blaine to tape the proceeding. When released, the tape has been edited to show the autopsy but without Scully’s interesting finding: the air force pilot inside the alien suit. Once more, the media has ill-served the public’s right to know.

My interest here is in Roswell, the people’s right to know, and how news and good fluff uphold that right while newslessness and bad fluff deny it. Last time, I argued that “Peter Jennings Reporting: UFOs — Seeing Is Believing” was bad fluff because it erased two sources of priming discourses about UFOs: the carefully mainstream National Investigations Committee on Aerial Phenomena and the flamboyantly eccentric contactees of the 1950s and 1960s. Here, I turn to the documentary’s treatment of Roswell to further illustrate how “Seeing” oversimplifies Roswell’s stories and the people who argue about them.

For “Seeing,” Major Jesse Marcel Sr. is the hero in this Roswell story. Stationed at Roswell Army Air Force Base, Marcel responded to a phone call from Mack Brazel, who had found strange debris in a remote pasture of his ranch. On 7 July 1947, Marcel drove to the ranch and gathered up the materials. Impressed by their odd appearance and properties, Marcel believed them to be extraterrestrial. He drove home and woke up his wife and son, Jesse Jr., to show them the debris. The next morning, Marcel delivered the materials to the base. By noon, base commander Colonel William Blanchard approved a press release: a UFO had been recovered and would be shipped to Wright Field, Ohio, for further examination. On 9 July, General Roger Ramey’s press conference rescinded that announcement. Newspapers ran headlines like “General Ramey Empties Roswell Saucer,” often accompanied by a photo of Marcel handling a damaged weather balloon. This tale emerges through clips and voice-overs featuring Peter Jennings, Jesse Jr in late middle-age, conspiracy historian Professor Robert Goldberg, and the Roswell-debunking UFOlogist Karl Pflock. The Marcel/Roswell story is not the only version of the Roswell Incident. In UFO Crash at Roswell: The Genesis of a Modern Myth, Benson Saler, Charles A. Ziegler, and Charles B. Moore deftly analyze Roswell’s basic story and its many permutations. Several Roswell stories make Brazel the hero including stories from sites maintained by David Rudiak and the International UFO Museum and Research Center in Roswell.

Rudiak’s site includes a section titled Newspaper Stories About Mack Brazel’s Interview, Roswell Daily Record, July 9, 1947 (Afternoon), “Harassed Rancher Who Located ‘Saucer’ Sorry He Told About It.” In this story, a thunderstorm blew through on the evening of 13 June. The next day, Brazel and his son Vernon found the wreckage while checking their sheep, which grazed on the leased J.B. Foster Ranch. Brazel saw a “large area of bright wreckage made up on rubber strips, tinfoil, a rather tough paper and sticks” with “no sign of any metal in the area.” Brazel mentioned the debris that evening to his wife and daughter, Betty. On 4 July, the family brought some debris back to the ranch house. Three days later, Brazel went to Roswell to sell wool and mentioned his find to Sheriff George Wilcox, who contacted the base. Marcel and a man in plainclothes responded, accompanying Brazel to the ranch, where they tried unsuccessfully to reassemble the wreckage. Marcel took possession of it; later Brazel heard about the press release and its recantation. Brazel is quoted thus: “”I am sure that what I found was not any weather observation balloon.”

The IUFOMRC offers two versions. The first has Brazel accompanied by the son of Floyd and Loretta Proctor, who leased their ranch to Brazel. Brazel noticed “unusual pieces of what seemed to be metal debris, scattered over a large area. Upon further inspection, Brazel saw that a shallow trench, several hundred feet long, had been gouged into the land.” Noting the “unusual properties of the debris” and “after dragging a large piece of it to a shed,” Brazel decided to tell the Proctors. They urged him to contact Wilcox, believing the debris was either extraterrestrial or top secret. After a day or two, Brazel did and Wilcox informed Marcel, who commandeered the site. Removing the wreckage took several days. On 8 July, at 11 a.m., the base’s public information officer, Lt. Walter G. Haut, issued the historic press release with Blanchard’s approval. Hours later another statement rescinded the UFO claim.

The IUFOMRC also summarizes an account from Don Schmitt and Kevin Randle’s A History of UFO Crashes. This time the UFO crashed on 4 July and was witnessed from afar by William Woody and his father. By the 5th, military had cordoned off the area. Next day, Wilcox contacted Marcel, who drove to Brazel’s ranch with intelligence officer Captain Sheridan Cavitt. Arriving that evening, they stayed at the ranch house and examined a “large piece of debris that Brazel had dragged from the pasture.” The next morning, they surveyed the debris, which covered three-quarters of a mile and included pieces of indestructible metal and short I-beams marked with symbols. Impressed, Marcel took some debris and, before delivering it to the base, showed it to his wife and son. Later, Haut issued the press release; Blanchard sent Marcel to show the debris to Ramey. Ramey had Marcel leave the material in Ramey’s office while they went to the map room. Returning they found the debris gone, replaced by a wrecked weather balloon. Ramey had Marcel photographed while handling that debris.

Disregarding contradictions within and across stories, Saler et al.’s point should be clear: people proliferate Roswell stories, shifting emphases and adding details along the way. All storytellers have reasons for their particular selections from the dozens of Roswell stories circulating. After telling the Marcel/Roswell story, “Seeing” debunks it, revealing the truth about the military cover-up: Ramey wasn’t covering up a UFO crash but the crash of a 650 foot long assemblage of plastic pipe and weather balloons launched by the top secret Project Mogul to monitor Soviet bomb tests. Ironically, Marcel outed the wrong cover-up, setting the stage for Roswell-mania with folks producing increasingly sensationalized accounts which In Search of …, Unsolved Mysteries, Larry King Live, Alien Autopsy, and The X-Files exploited.

Jennings states: “Jesse Marcel’s unproven story was now primetime mythology.” Referring to hard-core Roswell believers, he closes the section on Roswell: “They cling to a myth, a myth that here outside Roswell in 1947, the question of are we alone was finally answered. It was not.” Ironically, Marcel’s misunderstanding became enshrined as mythology; sadly, he never learned the truth about the real cover-up.

Thus “Seeing” lays to rest the Marcel/Roswell version. But the sad irony surrounding Marcel depends on his credibility, which has been questioned by the same Karl Pflock who helped “Seeing” construct its Marcel/Roswell story. In “Roswell in Perspective” and in “Karl Pflock’s Real Roswell Views”, Pflock claims that the elderly Marcel lied about his educational record, civilian accomplishments, and military record. Since the Marcel/Roswell story depends on Marcel’s veracity, Pflock’s charges deserve some screen time. But that would have destroyed the poignancy of the Marcel/Roswell story as told by “Seeing.” By oversimplifying the story and going for pathos, “Seeing” essentially fictionalizes Marcel. By papering over the controversy, it similarly fictionalizes the UFO community. This treatment of Roswell targets our ability to feel, not our right to know. To know, we need the facts in all of their complexity as people discover and develop them through time via research, argumentation, and narrativization. In the end, the facts do matter to the public’s right to know even when that right addresses fluff.