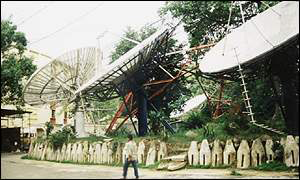 During 1980s television became the vehicle of conservative politics in India. What began as a secular nationalist project of legitimization of the state soon passed onto those forces challenging the foundational values of post-colonial India. A notable current of this movement was felt in the field of state-controlled Indian media that revolved around the televising of great Indian epics like the Ramayana[1] and the Mahabharata[2]. Though these epics were written over several different ages across India, TV gave the narratives a consistency with an eye to the national spectatorship and the common Indian market. Commercial TV stitched the nation’s opinion into one big monocultural body[3]. Behind the politicization of culture lurked a stronger motive that tried to unite the large country under one tele-visual sentiment upon which the satellite and cable TV built from the early 1990s onward.

But satellite TV did not inherit a uniform visual national experience to build its movement upon. While India was growing into the illusion of one culture, one language and one religion, large parts of its northeastern region stayed out of New Delhi’s culture radar and lived off wonderful American programmes and films telecast by the TV network of India’s neighbor, Bangladesh. This does not mean that American programmes telecast by Dhaka reflected the cultural requirements of the region. It was not expected of the foreign channels to cater to cultural demands of neighboring Indian states nor was there demand for inclusion into those programmes by the Indians. Satellite channels are more widespread and are based in India, and therefore demand for inclusion into their cultural consciousness is valid.

Like the mytho-nationalist 1980s, satellite TV in the new century continues to cater to one national culture alone falsely believing it is working upon the legacy of unity that was actually faked by the religious TV series. Indian Satellite channels do not nurture diversity within unity. As a result, the number of people watching the Indian spin offs of The Bold and The Beautiful, with a dash of South Asian joint family system and all that heavy traditional jewelry, reflect the life of a minuscule of the nation’s huge population.

Indian Satellite channels are the unintended followers of an exclusivist cultural politics. They celebrate enlightened liberalism while practicing regional exclusion. While northeast India barely managed to capture the national favorites in 1980s thanks to the weak terrestrial telecast service, the current satellite channels exclude the Northeast because it does not promise a vibrant market.

India is a modern innovation. Every modern attribute, from the railways to the telephone, and postmodern features like the emails and the satellite TV have played a role in fashioning the idea of India into its contemporary shape. But modernity came riding the ambiguous vehicle of colonialism that liberated India’s soul but enslaved its resource-rich body; modern India cannot deny its colonial inheritance.

Following its colonial self, modern India became a mixed bag of inclusion and exclusion. Once discriminated and exploited, contemporary India has learned to do the same to those who are invisible to its highly placed visor. Long regarded as one of the test labs of orientalism[4], India has perfected the art of ‘reverse orientalism’. Northeastern states are not alone; the rank of the cultural pariahs in India is filled by the scheduled castes, scheduled tribes, and ethnic, religious and sexual minorities.

When the idea of cultural uniformity was being forged in the rest of India in the 1980s, the Northeastern states were being cradled by extra-territorial entertainment that alienated them from the national cultural tradition of India and tied them to the spell of post-Vietnam recuperative American cultural influence spearheaded by M*A*S*H* and co. History of television is not uniform in all parts of India. Yet, the satellite TV deals with India as if it is one unproblematic piece of culture without any undulation. TV is a modern descendent of the discursive tendency started by the ancient Indian texts like the Vedas[5]. The Vedic literature survived because it was memorized and chanted by students over the ages. Those that were not included in the hymns were slowly forgotten and came to haunt the Vedic people as “demons”.

The booming satellite TV scene in India presents a much-needed opportunity of incorporation of “other” Indias, into the national mainstream. Unfortunately none of the channels are keen to treat the northeastern region as anything more than a repository of violence, cross-border drug trafficking, illegal immigration, and ethnic unrest. The Northeast is India’s anthropological playground; it is the name of an invented cultural cavity in the Indian psyche. Unless treated, this cavity too, like the demons of the Vedas, would end up spewing numerous spirits that would haunt India’s poverty-ringed prosperity for the times to come.

Notes:
[1] Ramayana or The Story of Rama was written by Valmiki before the Christian era. This is the account of a prince long denied of his due share in his father’s kingdom. Prince Ram was regarded as the epitome of virtue due to his fulfillment of all roles in life. Just before his return home from an enforced exile the princess Sita, Ram’s wife was kidnapped by the demon king Ravana. Rama fights a war with an army of monkeys and rebels in the demon kingdom and brings Sita back. A victorious Rama then returns to his kingdom Ayodhya to rule over his subjects.
[2] Written by ancient philosopher and poet Vyasa, this epic is the story of the Kuru dynasty and how it self-destroyed when descendents of two princes fight over their due shares of the kingdom between the rivers Yamuna and Ganga.
[3] The impact of mytho-nationalistic TV series in 1980s upon the discourse of gender and Indian nationalism has been discussed well in, Purnima Mankekar, Screening Culture, Viewing Politics: An Ethnography of Television, Womanhood, and Nation in Postcolonial India (Duke UP, 1999).
[4] By dealing with the issue of colonial practice of cultural diminution of the West’s others in Orientalism: Western Conceptions of the Orient (Penguin, New Delhi, 2001), Edward Said begins the discussion which can then be extended to the postcolonial states themselves to examine how they at times fail to represent the true and honest aspirations of their people due to the malfunctioning of the state.
[5] Vedas are the ancient Indian texts. Mostly recollected by students in traditional schools, the Vedas are divided into four parts, the Rig Veda, Sham Veda, Yajur Veda and Atharva Veda. Rig Veda is the oldest of all and is thought to have been composed between 1500-1000 B.C.

Links:
More on Epics on TV
What a TV Epic Did To India