Media Studies for the Hell of It?: Second Thoughts on McChesney and Fiske

by: Aniko Bodroghkozy / University of Virginia 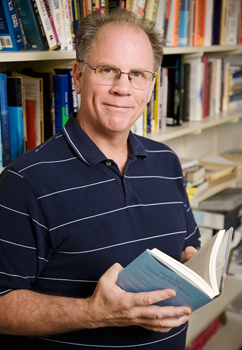 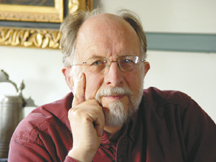 I’ve been thinking about a somewhat inflammatory polemic that Robert McChesney (above, left) wrote almost a decade ago in which he skewered unnamed Postmodern and Cultural Studies-influenced media historians for producing “politically timid and intellectually uninteresting and unimportant” and “trivial” work (McChesney: 1996, p. 540). He argued that, given the policy and regulatory decisions — such as the recently passed 1996 Telecommunications Act — that were likely to fundamentally reshape the communications landscape, media scholars needed to be providing historical scholarship (and by extension, one assumes, non-historical work as well) that intervened and provided context for these policy debates (p. 550).

The work that McChesney characterized as “trivial” tended to focus on audiences and the “discovery” that “they do not necessarily swallow whatever the corporate masters feed them” (p.544). Clearly McChesney was mopping the floor with the scholarship of John Fiske (above, right), his students, and those influenced by Fiske’s work on popular culture and television. The piece also seemed to be excoriating Lynn Spigel’s hugely influential cultural history of suburban families and the introduction of television in the postwar era (Spigel: 1992). McChesney may have been coy about “naming names,” but it was pretty clear who he was talking about.

For a young scholar like me this was far more than an academic battle among competing intellectual paradigms. If you were a grad student in the Telecommunication section of the Department of Communication Arts at the University of Wisconsin-Madison in the 1990s, this was about you. In the early 1990s McChesney was a junior faculty member struggling to get tenure in the Journalism and Mass Communications Department one floor down from Comm Arts in Vilas Hall. Upstairs on the 6th floor of Vilas Hall, John Fiske ruled. Brought into the department in 1988, Fiske was a star. His brand of “affirmative” Cultural Studies was the emergent paradigm, McChesney’s hoary old “political economy” appeared residual. In Fiske’s terminology the “financial economy” that scholars like McChesney, Dallas Smythe, Herb Schiller and the like focused on wasn’t the end of the game. Scholars needed to pay attention to the “cultural economy” of audiences and its meanings and pleasures (Fiske: 1989, p. 26). Grad students on the 6th floor of Vilas, such as me, would genuflect in front of the financial economy of television, but then quickly move on to the really fun, interesting, sexy, and cutting edge stuff we could analyze in the cultural economy. Political economy scholarship and policy studies were like broccoli. Good for us as media scholars-in-training, but not tasty. We taught issues of ownership and control and media concentration to our students because we knew it was important for them to understand how the media industries were configured. These issues were never central, however, and certainly not in our own developing scholarship. Cultural studies made a more satisfying meal and it seemed more well balanced.

Fast forward to 2005. John Fiske is retired from academe and runs a successful antiquing business in Vermont and writes about 17th century oak furniture. Robert McChesney is now the star. He writes best selling books (McChesney 1999), gets compared to Thomas Paine and Paul Revere, heads up one of the most dynamic of a growing number of media reform organizations, Free Press, and has managed to make political economy of the media sexy. It’s feeling to me that McChesney’s paradigm is now emergent and cultural studies residual. (Here in Flow, some of the most stimulating and well-responded-to pieces have been columns on media reform from Tom Streeter and Mike Curtin).

Let me pose a question bluntly: to what extent does it matter whether TV audiences can or do perform negotiated or resistant readings of Fear Factor or Punked or The Apprentice or Desperate Housewives? Are audience agency and receptive practices important right now? In the past, one could argue (and I certainly have) that television as popular culture functioned as an important cultural terrain for mediating and negotiating significant social change (Bodroghkozy: 1992, 2001, 2004). Fiske’s argument that popular culture was “on the side of the subordinate” and had politically progressive (albeit not “radical”) possibilities made sense within the context of television programming in the 1960s and 1970s. A mushy form of liberalism was hegemonic common sense throughout this period. Even the Reaganite 1980s could not significantly overthrow the cultural impact of the social change movements of the 1960s and 1970s. Jane Feuer found the pervasive self-reflexivity of 1980s TV to constitute a “postmodern form of complicitous critique” (Feuer: 1995, p. 9). By decoding reception practices during this period, critics and scholars could actually produce useful information about the cultural handling of larger political and societal forces.

And with broadcast television of the 1990s, we saw a new “Golden Age” of quality and popular prime time fare. A commentator on Public Radio International recently extolled 1990s TV observing that “in the ’90s the best shows were also by and large the most highly rated shows. That had never happened before. And mainstream TV was arguably superior to mainstream motion pictures. That had never happened before either.” I could have deconstructed this “high culture/low culture,” canon formation talk, but instead I sat in my car nodding vigorously at my windshield as I listened. Clearly in the 1990s when TV was “good” (even while some of my grad school colleagues were almost perversely fixating on “bad” TV), it became intellectually defensible to study the texts and audiences of the medium. Television merited humanistic and textual analysis even though cultural studies approaches were not grounded in questions of aesthetics and artistry. I don’t think it is any accident that television studies entered the academy during this “Golden Age.” And the “best” shows of the 1990s were also ones that welcomed readings over contested ideological positionings and subversive discourses. There is excellent scholarship on shows like Roseanne, thirtysomething, The Simpsons, Murphy Brown, etc. Fiske’s best (and regrettably last) book on television was about how 1990s television produced media events that brought to “maximum visibility” otherwise hidden cultural currents and shifts in the structure of feeling (Fiske: 1996).

But the 1990s was the time when McChesney’s voice cried out in the wilderness that we cultural studies/Postmodernist scholars of television and media were blind — bewitched by carnivalesque trifles and simulacral silliness. Most media scholars are ready to concede, of course, the intellectual shallowness and “banality” (in Meaghan Morris’s terminology) of the mania for finding “resistive” or “oppositional” activity everywhere in the pop culture environment. That moment does seem to be “oh so 90s” and over. The 1990s also saw the entrenchment of media deregulation that has ushered in the frighteningly concentrated industry we find ourselves with today. What I am trying to figure out is to what extent McChesney was correct to chastise cultural studies-oriented media scholars (historians or not) for our preoccupation with bottom-up tactics over top-down strategies of power, ownership, and control. Were we feasting on cultural studies meals of empty calories and sugary treats when we should have been eating our broccoli, strengthening ourselves to produce muscular scholarship for battles in the political arena?

I am struggling to find an answer. I’m not ready to junk my own approach to television study (which has always tried to account for lines of power, dialogue, resistance, and incorporation across industry, text, and audience formations within specific historical contexts). On the other hand, to analyze contemporary television and media and not take account of the massive concentration of ownership of all sectors of media into a small handful of conglomerate behemoths with more power than many nation-states seems intellectually decadent.

McChesney and his acolytes are becoming political activists and intervening directly into the political and regulatory regime. Whether one agrees with McChesney and Free Press’s particular agenda or framing of the issues seems beside the point. The point is for television and media scholars and students to get involved in media reform politics. I went to the first national media reform conference organized by McChesney’s group in 2004, held in, of all places, Madison. Practically nobody from the 6th floor of Vilas Hall was there. Practically no television studies/media studies scholars I know (except for Constance Penley and fellow former Vilas “telecommie” Norma Coates) attended. I couldn’t understand why not. I found it strangely ironic to return to Madison and find my intellectual allegiances shifting, at least somewhat, away from what the 6th floor had represented to me as a grad student and moving downstairs to the 5th floor. A couple weeks ago, the second annual media reform conference took place in St. Louis with reportedly over two thousand in attendance. I couldn’t make it this time around but hoped other media scholars could.

For me, it comes down to this: regardless of what we do in our scholarship, if we consider ourselves students and teachers of media and television but are not on some level involved in media reform, we’re doing media studies “for the hell of it.”

—. “Is This What You Mean By Color TV?: Race, Gender and Contested Meanings in NBC’s Julia.” Private Screenings: Television and the Female Consumer. Eds. L. Spigel and D. Mann. Minneapolis: U of Minnesota P, 1992.

Feuer, J. Seeing Through the Eighties: Television and Reaganism. Durham, NC: Duke UP, 1995.

McChesney, R.W. “Communication for the Hell of It: The Triviality of U.S. Broadcasting History.” Journal of Broadcasting and Electronic Media 40 (1996).

Spigel, L. Make Room for TV: Television and the Family Ideal in Postwar America. Chicago: U of Chicago P, 1992.