“Can There Be Television Without Star Trek?” 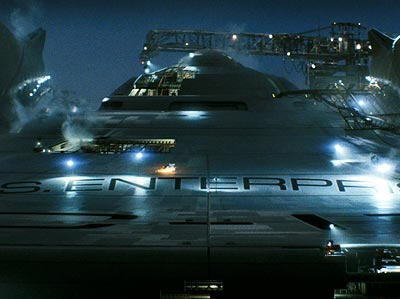 With the usual dismay of a fan whose favorite show is being cancelled, I watched the series finale of Enterprise (UPN, 2001-2005) last night. The cancellation of the show is bad news, I will argue, for television history. The development of the Star Trek franchise has been a prominent part of American media history of the past forty years. A low-rated NBC show in the late 1960s, Star Trek (NBC, 1966-1969) developed a cult following in the 1970s, resulting in a lucrative series of feature films and a first-run syndicated sequel, Star Trek: The Next Generation (1987-1994), itself the source for more feature films. Even more television shows resulted, including Star Trek: Deep Space Nine (also first-run syndication, 1993-1999) and Star Trek: Voyager (1995-2001). This latter show was used to help launch UPN, an idea for a (at the time) fourth network that had been brewing at Paramount since the 1970s. Of course, by the time the network debuted in 1995, it was the sixth network (behind Fox and the WB) in a televisual landscape already saturated with cable channels. This was the economic climate in which Enterprise found itself when launched in late September 2001, not insignificantly three weeks after 9/11.

Like most television shows, Enterprise was cancelled because of low ratings. Its premiere episode garnered respectable ratings (7.0 with an 11 share). By the third season, the weekly ratings hovered around a 2.5 with a 4 share. The collapse of Enterprise says something significant about the changed nature of Paramount’s position. UPN now no longer needs a flagship Star Trek show to compete in the industry. In the 1980s, Star Trek was one of the company’s few reliable brand names. The thought of launching a television network without Star Trek as its flagship would have been unthinkable. Now, however, the network airs more typical, banal shows that compete far better in the marketplace. For example, a piece by Steve Rogers of Reality TV World boasts, “America’s Top Model Setting UPN Ratings Records,” highlighting the reality show’s 4.9 million viewers on January 11, 2004. The Enterprise episode, “Chosen Realm,” which aired that week on January 14, by contrast, had only 3.9 million viewers. Given these economic conditions, will a new Star Trek series ever be launched? After all, reality TV is very cheap to produce, and Star Trek is, by definition, special effects-intensive and thus very expensive to produce. If television becomes Star Trek-free, should we care? I believe we should: television without Star Trek would be lamentable. However, my rationale for this position is not what you might expect.

I should start by saying that I am a thoroughly schizophrenic Star Trek viewer. On the one hand, I have never missed an episode of any of the Star Trek shows. On the other hand, I find these series’ Gene Roddenberry-inspired utopianisms thoroughly unpalatable. I see little evidence that the dysfunctional United Nations might serve as a model for interplanetary politics, even in the very distant future. I also find the racial allegorizing of most of the series completely impotent: the representation of discrimination against aliens does not necessarily engage real-world racism because people’s racist impulses on Earth are founded on misguided interpretations of their surroundings. For example, some of my Montana students tend to believe Native Americans are lazy because they happen to live near a reservation. Without the real-world legacies of racism (no one on our planet has ever suffered from, or perpetrated, discrimination against the Klingons), it is quite a stretch to believe that anti-racist allegories have much ideological force.

Of all the Star Trek shows, I liked Enterprise the best. It muddied the utopianism of Roddenberry’s Star Trek by making our intrepid human explorers thoroughly incompetent and outgunned at every turn. Furthermore, the Vulcans, those Mr. Spock-like rationalists praised by Roddenberry’s system, are revealed as scheming hypocrites. What is important about this is that the ever-expanding Star Trek televisual universe requires radical alterations to the basic premise of the franchise to keep it alive.

Enterprise accomplished this radical modulation with virtuosity. After 9/11, the writers completely altered the course of the show, ending the first season with Captain Archer standing amid World Trade Center-like urban ruins, the result of a “Temporal Cold War,” an attempt by aliens to keep the Enterprise from arranging the development of the United Federation of Planets.

This plot arc resulted in, I think, one of the best seasons of television of any show, its third season, in which Enterprise is thrust into “The Expanse” in order to avenge the murder of millions of people in Florida, the result of a sneak attack by a species known as the Xindi. This 9/11 allegory shifted the show fully serial, as each week we watched to find out if the Enterprise would be able to navigate this hostile section of space and destroy the Xindi’s weapon before it could annihilate the Earth. While Star Trek: The Next Generation shifted semi-serial in the early 1990s, with an astonishing season-ending cliffhanger, “The Best of Both Worlds” (5/18/90) in which Captain Picard was transformed into a cyborg, Enterprise‘s third season resembled the fully serial and thus melodramatic nature of the prime-time soap opera and its ratings-grabbing cousin, 24 (Fox, 2001-present).

Enterprise seems a show thoroughly designed to alienate its fan base. One of the things I really dislike about Star Trek are all those scenes with people standing around discussing space-time anomalies. Enterprise minimized this science babble, instead embracing the melodramatics of television drama. In my favorite scene in the show, we wonder whether Commander Trip Tucker (Connor Trinneer) and Subcommander T’Pol (Jolene Blalock) will have sex while rubbing each other in the decontamination chamber. Even Dynasty‘s Crystal Carrington never did anything to compete with that.

But the most melodramatic change involves the song sung during the credit sequence. In the Star Trek televisual universe, this is sheer sacrilege. All the Star Trek shows save this one begin with some inspirational instrumental music designed to capture the seriousness of space travel. Enterprise instead features Russell Watson singing, “Faith of the Heart”: “It’s been a long road, gettin’ from there to here.” It’s a catchy tune in its “Greatest American Hero” cheesiness, so much so that my seven-year-old son and I looked forward to singing along with it every Friday night. Whatever its musical failings, the song indeed captures the changed theme of the show: It expresses the melodramatic desire these characters have for not letting the Vulcans push them around anymore, to go out and boldly explore where no one has gone before.

All of which is to say that what killed Enterprise in the ratings is what makes it great — by which I mean, typical — television. Unlike my love of cinema, my engagement with television relies on intimacy and familiarity. For example, I love to watch Bewitched (ABC, 1964-1972), not because its episodes are brilliantly-written or that it is hysterically funny, but because after a few episodes watching the endearing characters (witty Samantha, scheming Endora, and befuddled Darrin), I am hooked on the experience of being with them to confront their daily crises. After seeing the 254 episodes multiple times, I still want to be with them. Such is the case with Star Trek, multiplied via an array of different series in a way impossible with Bewitched, and hence the dismal failure of its spin-off, Tabitha (ABC, 1977-1978). Star Trek builds a universe of intimacy. I know it as well as I know my own backyard: My backyard has worms while Star Trek‘s has wormholes. To make a new Star Trek show, one has the luxury of 39 years’ worth of such intimacy. Unlike Bewitched, it does not have to be built from the ground up. This is the lesson of Enterprise: to delve into the back story of where the Federation came from is to delve into the back story of television itself. To not be able to experience this return of intimacy in another Star Trek show would be devastating.