Who Wants to be a Crorepati?: Global Television and Local Genres in India 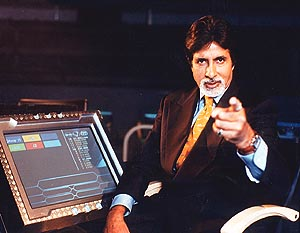 In 2000, when Star Plus Channel launched Kaun Banega Crorepati? (KBC), the Indian version of Who Wants to Be a Millionaire?, the show quickly became the biggest hit on Indian television. Hosted by the megastar of Hindi cinema, Amitabh Bachchan, KBC, and catch-phrases from the show such as “lock kiya jaye,” “computer-ji,” “pucca,” and “fifty-fifty,” became popular parlance in India. At first glance, KBC may seem very similar to the many versions of Who Wants to Be A Millionaire? produced in more than 30 countries under a franchise agreement with the London-based Celador Productions which produced the first version in Britain. The title of the Russian version of the show translates into English as “Oh! Lucky Man,” while in the Spanish version the title reads “50 for 15” (which refers to the 50 million pesetas that the winner of 15 questions takes home as the grand prize).(1) In the Indian version, “crorepati” refers to the contestant who can win the ultimate prize of Rs. 1 crore (approximately 220,000 US dollars).

As with all the international versions of the Millionaire show, the producers of KBC were contractually obligated to reproduce, down to the exact detail, the trademark title design, the show’s sets, music, question-format and the qualification process which are laid on in a 169-page document created by Celador Productions.(2) The studio setting for KBC consists of the standard blue background, while the foreground is well-lit to bring into focus an elevated stage with two seats in the middle for the host and the contestant, and a computer placed next to the host. The studio audience is seated around the stage, with the family members of the contestants seated prominently in the first few rows. The studio audience contributes to the pace and tone of the show by applauding for the correct answer, and observing in hushed silence as the stakes get higher for the contestants. The camera work, editing, lighting and music also contribute to create the heightened senses of suspense and relief in relation to the highs and lows of each contestant’s fortunes. The host also plays an important role in creating and maintaining the ebbs and flows of suspense and relief through the show by first putting the contestants at ease small talk at the beginning, reminding them of the rising stakes as the show goes along, and nudging them to consider the use of lifelines for the more difficult questions. A quick conversation with the family members in the studio audiences, or an occasional joke at the expense of the contestant in the hot seat, a polite hello to the friend who calls in to help the contestant in a pickle, and finally a sense of empathy with the winners and losers alike; all help to personalize the host and make a connection with both the studio audiences and the television audiences.

In other words, the program format and the studio settings created for KBC are almost identical to all the other international versions of the Millionaire show. However, during the 2000-2001 season, when it was telecast for four days a week at 9:00 p.m. on Star Plus Channel, the show captured viewers’ imagination in a manner not seen in Indian television since the serialization of Ramyan and Mahabharat on Doordarshan in the late 1980s. Initially, the ratings for KBC were stratospheric with the first season enjoying a TRP rating of 14 (while most other shows on cable were struggling in the single digits). Although KBC‘s TRP rating fell to 10.2 in the following year, viewer interest remained very high, and Star TV continued to receive around 200,000 calls a day from potential contestants.(3) Fans of the show who could not, or did not want to, get on the show were just as eager to share a seat next to the Big B (as Amitabh Bacchan is popularly known in India).

Not everyone, of course, was caught up in the euphoria over KBC. In an online discussion group on KBC at mouthshut.com, a couple of irritated reviewers tried to explain to an overwhelming majority of fans that the show was just a cheap imitation of a foreign program. A posting by “Amrita” reads, “Before I start my review, let me educate the members here that KBC is an exact copy of American show Who Wants to be a Millionaire.” Another posting by “Sujay Marthi” is even more scathing, “What is it about this pack of new-age foreign-trained producers of TV serials/programmes that makes me think that they’ve all worked as stable hands before? The similarities in the two fields are too glaring to miss.”(4)

For the diehard fans of KBC, however, the criticism that the show is “an exact copy” of the Millionaire seems to be of little concern, as the following posting by “dhrumil 83” on mouthshut.com reveals: “KAUN BANEGA CROREPATI might have had been copied from ‘WHO WANTS TO BE A MILLIONAIRE’. But to tell you the truth the copied version is better than the original one. SIMPLE ANSWER – It has AMITABH BACHAN [sic] in it. He is the one the greatest…”.(5)

Although some of reasons for KBC‘s success may have to do with the trade-marked presentation and packaging of the Millionaire franchise around the world, it would be difficult to ignore the role that Amitabh Bachchan plays as the host of the show in making the show more appealing to Indian television viewers. In one of the more astute analysis of the Crorepati narratives, Shiv Visvanathan points to Amitabh’s uncanny ability to create “human interest” encounters with the participants of show, in spite of his status as a living legend in Indian cinema.(6)

It is important to note the reasons for Amitabh’s uncanny ability to make a personal connection with the average television viewer cannot be understood by simply comparing his role as the host of KBC with the performance of other hosts of the Millionaire show such as Regis Philbin in the United States. Given Amitabh’s status as the undisputed megastar of Hindi cinema, we must recognize that his performance as the host of KBC is akin to the role of a cultural translator who skillfully connects texts with audiences by drawing upon their common understanding of the codes and conventions of old and new genres.

Following Amitabh’s success as the host of KBC on Star TV, a variety of game shows and reality shows on competing networks featured other famous movie stars from the Hindi film industry. To get a share of the advertising pie in the 9:00 p.m. primetime slot that was all but owned by KBC on Star Plus, Zee TV began airing its own game show called Sawaal Dus Crore Ka (A Question of Ten Crores) with the noted character actor Anupam Kher in the host seat. Although Zee TV had upped the prize money stake by ten times over what Star TV offered contestants on KBC, the ratings for Sawal Dus Crore Ka remained poor. Anupam Kher was soon replaced by the well-known heroine Manisha Koirala, but the show failed to take off. Over at SaBe TV, a new game show called Jab Khelo Sab Khelo (When You Play, We All Play) was launched during the daytime with the popular television personality Shekar Suman at the helm of affairs. Sony TV introduced its own game show called Jeeto Chappar Phaad Ke with superstar Govinda threatening to give Amitabh Bachchan and KBC a run for the advertising money.

In 2002, Sony TV quickly followed up on the success of Chappar Phaad Ke with a reality/game show hybrid called Kahin naa Kahin Koi Hai (Someone, Somewhere) featuring Madhuri Dixit — the #1 heroine in Hindi cinema during the 1990s. Known as K3H, for short, the show took the traditional concept of arranged-marriages into television land by bringing together young men and women, along with their families, and helping them find a life partner over a span of four episodes.

In this essay, I have chosen focus on Amithabh Bacchan’s role as the host of KBC not because I believe that KBC is the most “Indian” game show on television. Clearly, other game shows like Chappad Phar Ke with Govinda, and reality shows like K3H with Madhuri Dixit playing the role of the host are equally, if not more, “Indian” in their format, content and character. Rather, I focus on KBC because it appears to be an extreme illustration of commonly held view that internationally-syndicated game shows and reality TV shows in India are cheap and vulgar imitations of popular American television genres. Yet, when we look closely at Amitabh Bacchan’ role as the host and his creative enlisting of “computer-ji’s as a sidekick, it quickly becomes clear why many Indian viewers did not see KBC as a copy of a globally-successful franchise, even though most of them were well aware of the existence of other versions of the Millionaire show around the world.

India’s Who Wants to Be A Millionaire