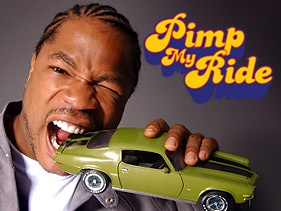 Pimp My Ride on MTV

These days, the expression “overhauling” is in the air (and “on the air.”) Among journalists’ and politicians’ accounts of what the United States can expect from George W. Bush’s second term as president, “overhauling” has become the term du jour for his and fellow Republicans’ plans to achieve a broad array of reforms that will reinvent the role of government (and the role of citizens) under the banners of various slogans: Ownership Society, the Conservative New Deal, or the New New Deal. Some of the most prominent programs targeted for overhauling–for cultivating an Ownership Society — include Social Security, federal taxes, and federal and corporate-sponsored health insurance. This particular vision of reinventing government and citizenship is not necessarily new, having developed out of the “supply-side economics” or “trickle-down economics” of Ronald Reagan’s “Morning in America,” Newt Gingrich’s “Republican Revolution,” and the “welfare reform” of the Clinton administration’s second term — all of which considered decades-old national programs of social welfare to be impediments to localizing, privatizing, or personalizing the administration of social welfare in the U.S.

“Overhaul,” however, has become the operative program and plan — the key word for making sense of the circular reasoning of W’s claim in his recent inaugural speech that “in America’s ideal of freedom, the public interest depends on private character [and that] self government relies on the governing of the self.” Indeed overhaul, make-over, radical surgery, and the reinvention of government all involve not only our primarily cutting back on services previously administered through federal programs, but redefining the responsibilities of government as well as the responsibilities of citizens — and (following Bush’s mantra over the last four years) “advancing freedom” in this way. In the U.S., particularly in these times, the advancement of individual rights and liberties is predicated upon the advancement of personal responsibilities — upon refining the techniques of independence, as a means to overcoming states of dependence.

Today, what exactly are, and where do we find, the techniques, technologies, and guidelines of self-government and of freedom as a private (or personal) responsibility, as a measure of good citizenship to which we are expected to “own up” in an Ownership Society? In the past weeks, several contributors to Flow have offered thoughtful accounts of the recent array of make-over programs on television. In this article, I suggest that the various political programs promising to reinvent government have had something to do with the reinvention of television (and the reivention of the “TV program”) as techniques, regimens, and technologies for self-government — for looking after and taking care of oneself, for maximizing personal responsibility, for becoming as self-directed as possible, and thus for becoming a good citizen within the current reasoning about government.

Make-over TV (the television make-over and TV’s own reinvention) is not simply about the idea of freedom, citizenship, and self-governance, it is about demonstrating the specific techniques and technologies for acting and behaving as independent, self-governing citizens, about the performance of citizenship by applying these techniques in daily life, about recognizing our entrepreneurial skills and resources, and about empowering citizens in these ways. Granted, there are significant differences between series such as The Swan, America’s Next Top Model, Nanny 911, Extreme Makeover (and its Home Edition), Queer Eye For the Straight Guy (and Girl), Renovate My Family, Judge Joe Brown, Curb Appeal or Mission Organization, Fit TV (a channel for physical fitness), Suzie Orman’s financial advice, the Food Channel’s Molto Mario, and things learned on the Learning Channel. But that is the point. We have a lot to work on, a lot to be responsible for in these times. We are asked to maximize our flexibility as workers, citizens, and viewers of TV. TV, meanwhile, has been reinvented to demonstrate the multiplicity of little challenges, the little techniques for taking care of ourselves, and the big results of making ourselves over — and in this way, to make the televisual programs of self-help relevant and matter within the political programs for reinventing government.

Providing for and taking care of ourselves (preparing citizens to be managers of their own security, welfare, health, and happiness, “freeing ourselves” from a “cycle of dependency” associated with older and purportedly broken vehicles of state-sponsored welfare) requires regimens, programs, and technologies designed for the body, personal finance, work habits, home organization and improvement, and entire towns (as in Town Haul) — endless retraining to enable us to lead fulfilling lives within the new reasoning about work, leisure, and self-management. The car-overhaul is one of the most important of these programs because the automobile has long been the technology, the vehicle, that liberal democracy in the U.S. has valued most–automobility as the self-reliant, self-directed, fully transported (free) self, and the fully transportable TV viewer. Tele-vision, after all, has developed through technologies of transport, portability, and automobility.

For the population that Bush’s overhaul of Social Security is most supposed to empower, Pimp My Ride has become over the last year one of the most successful programs on MTV, and has become a template for car and motorcycle make-over programs on other networks (including The Learning Channel’s Overhaulin.) In the MTV series, a young man or woman wins a competition to have a Los Angeles-based custom body shop not just rehabilitate her or his car but address her or his personal requirements for becoming self-sufficient and self-directed by enhancing the synergy between driver and her/his mode of self-transport (i.e., by having her or his “ride pimped.”) In many cases, the cars’ owners justify their need for an overhaul in terms not only of how their social mobility (their ability to find a job or to work effectively, their ability to perform routine tasks for themselves, friends or family, their ability to socialize or date), but also of how their ability to help themselves, have been impaired by the pathetic condition of their car. A primary objective of car enhancement, therefore, is providing a set of technologies for managing the everyday tasks associated with professional and social mobility in an environment that requires young workers, revelers, consumers, and citizens (viewers of MTV) to have and display the means of self-sufficiency as automobility.

In an episode from the spring of 2004 and regularly repeated, Logan, a young, African-American man, wins an opportunity to have his 1986 Oldsmobile Cutlass Supreme overhauled. The first part of the episode tracks various problems with the car’s appearance (its lack of paint, its dents, its having become a trash can for wrappers, soiled clothes, and uneaten food) and its functioning (a malfunctioning radio and an inoperable driver’s-side window that forces him to retrieve fast-food from drive-throughs by stepping out of his car). Not only is the condition of his car preventing him from achieving his goal of becoming a business man and of starting his own company, but he fears that travelers on L.A.’s freeways wrongly will perceive him as dangerous, “as up to no good — a drug-dealer or a gangster.” The Cutlass, he surmises, is the model of and for a 1980’s generation of entrepreneurs, and its restoration would bring him closer to that path of taking control of many facets of his life: “Back in 1986, Hugh Hefner and all the pimps were rollin in this car; it’s an American legend.” A young African-American man’s valorizing (and rehabilitating) the successful White entrepreneur as pimp is now no more strange or contradictory than the largely White consumers of MTV being instructed on the arts of self-help and social mobility by the predominantly African-American customizers and body-experts of Pimp My Ride.

Although Pimp My Ride involves an identity transformation (of driver and car), the refashioning of the car involves not simply designing but customizing and personalizing the technological vehicle for self-realization. Logan’s life may require the intervention of experts, but the TV experts’ design respects and encourages Logan’s individual requirements for self-actualization.

Of all the make-over programs, the car overhaul as a televisual program for self-realization (auto-mobility as the technology of the fully mobile self) recognizes the current technological link between driver and TV viewer/listener, between car, communication technology, and TV. Having one’s ride pimped — technologically reassembled or reconditioned — acknowledges the current requirements of video and audio in and from the car. Logan’s car is outfitted with a new CD-player/radio, dual video monitors in the backseat for video-gaming and DVDs, a karaoke system (and pop-up video screen) in the trunk, and a speaker-system that, after the car in Knight Rider (a TV series from the same era as his Cutlass), allows the driver to speak to pedestrians. And Pimp My Ride regularly features even more elaborate (though always personalized) video and audio accoutrements than Logan apparently required. Pimp My Ride puts on display and demonstrates that the practice of freedom and that the road to self-actualization (taking control of and more effectively directing one’s life) is not simply about watching TV anymore, but about applying oneself through a synergy between communication and transportation technologies, through the transformation of the car and audio-video systems into a more mobile and flexible vehicle of self-realization and self-government. Fashioning a “smart car” (a well-designed and pleasing car, as well as an assemblage of intelligent media/communication technologies) becomes a multi-media vehicle for getting where you want to go.

While The Learning Channel’s Overhaulin is more cautious (demure perhaps) about representing car-makeover as “pimping,” the two titles collectively underscore one of the important strategies of instruction and demonstration in the current reasoning about government and citizenship — a lesson not lost on Logan when he invokes a Cutlass-driving Hugh Hefner as a vital model of entrepreneurial citizenship. As I write this article while Bush delivers his State of the Union speech, I wonder whether my students are watching the speech, Pimp My Ride, or Overhaulin, whether (or how) one program matters more than the other, and whether (or how) it matters where they are watching or listening to it — in their car or their apartment. Bush concludes the State of the Union speech referring to the uncertainties and risks along “the road of providence” that leads (where else?) “to freedom”. The current State of the Union affirms predictably that overhauling is tantamount to mobilizing (or auto-mobilizing) a TV citizenry, tantamount to social mobility in a Society of (Auto-)Ownership (of citizen-drivers rather than passengers), and tantamount to “advancing liberty” along the “free”-way of televisual citizenship, even as the president’s cocky smile, and the glint in his eye, suggest that he wants to pimp my ride.

(Thanks in particular to Laurie Ouellette and Jeremy Packer for our on-going conversations about these matters.)