“Print the Money”: Mediating the 2004 Elections

by: Anna Everett / University of California at Santa Barbara 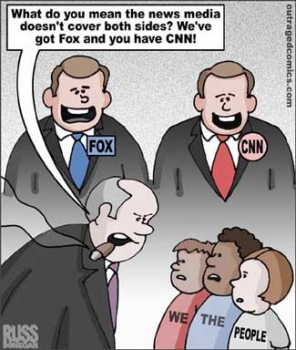 The title of this essay derives from a telling remark made by ubiquitous network news super star journalist Tim Russert following the third Presidential Debate on October 13, 2004. Russert’s comment came during his talking head-segment on the Fox News Network with Fox News anchor Britt Hume. Russert was speaking about the financial windfall that will accrue to the broadcast and cable networks, print and radio media, particularly in the swing states (where political ads will bombard the electorate, and where the candidates will campaign feverishly in the last days leading up to November 2 — election day).

Upon hearing it, I realized immediately that this fecund phrase captured the most egregious feature of our present-day political discourse as mediated through our increasingly powerful corporate-sponsored media industries. The first entry on Google’s 69,000 hit list for the key word “Tim Russert” is a professional biography statement from the MSNBC News website. The site reveals that Russert is the moderator of CBS’ Sunday news magazine show Meet the Press, an anchor at MSNBC’s Tim Russert Show, and Senior Vice President and Washington Bureau Chief at NBC News. Clearly, Mr. Russert enjoys a lot of television face-time. Thus, his highly politicized comments are not insignificant. And despite mainstream media polls that suggest the political influence of Russert and other high profile mainstream media pundits and their news organizations have declined precipitously in the wake of “negative” reporting, the fact remains that bad news and negative political campaign ads sway public opinion.

In fact, when Russert said “Print the money” in the context of the current election cycle, it reminded me of the memorable commercial ad slogan a few years back from the investment firm E.F. Hutton that stated, “When E.F. Hutton speaks, people listen.” Russert’s slogan gave me a way to frame and contextualize my concern about the unfortunate diminution of serious political discourse now that the public sphere has been purchased, privatized and ostensibly rendered prostrate by the profit motive and conservative ideological party lines of our powerful media oligopolies. Nothing highlights this dangerous state of public affairs discourse more than the fact that Ted Turner’s conservative CNN (before he was ousted recently as CEO) has been dethroned by Rupert Murdoch’s arch-conservative Fox News Network as the nation’s highest rated cable television news network. Where journalists once spoke of “the CNN effect” to describe that network’s once preeminent status as the “go-to” source for effective, 24/7, breaking, “live” and “crisis” driven news coverage in the wake of the 1986 Challenger spaceship disaster and its unparalleled coverage of the 1991 Gulf-War/Desert Storm campaign, they now speak of “the Fox News effect.” Apparently, Fox News (and its star journalist Bill O’Reilley — now embroiled in a sexual harassment lawsuit) cemented its ratings lead over CNN during the second Gulf War/ Operation Iraqi Freedom campaign (see Google, key words “fox news effect”). As I stated, these recent developments in the televisual landscape coupled with the mainstream media coverage of the upcoming election year politics got me to thinking seriously about the promises versus the reality of the much-touted benefits of our new participatory electronic democracy replete with new instant TV, phone, and internet polls, chat and blogging interactivity. Considering it all at this epochal moment, I fear that we are being bamboozled. And based upon my news-junkie consumption of broadcast TV and cable networks, print and radio texts dealing with the upcoming elections, I will tell you why.

Reading, Watching and Taping the Media Coverage of Election 2004
There are five television sets and three VCRs in operation in my home, and all were put to use documenting both the cable and broadcast TV networks’ political coverage of the conventions and the Presidential and Vice Presidential Debates on C-SPAN, PBS, CNN, Fox News, MSNBC, and the truncated news coverage on NBC, CBS and ABC. One of my television sets is a brand new 50-inch, flat screen plasma TV. Although I had not planned for it, the plasma TV (enhanced with TIVO and high-definition digital cable service) provided me with an unanticipated vantage point on this year’s political coverage not available to most viewers.

Under the category of “too much information,” I saw in high-definition (hi-def) unflattering close-up shots of Senator John Kerry’s face during his big nomination acceptance speech. The hi-def close-up shots revealed Kerry’s heavy perspiration and cotton mouth quite vividly on my big screen. For me, this amazing visual clarity conjured up images of the Kennedy-Nixon television debate in early 1960, when Nixon arguably lost the television debate to Kennedy because on camera Nixon looked tired, in need of a shave, and wore a grey suit that blended into the televisual background. Kennedy, on the other hand, reportedly looked tall, tan, handsome and presidential in his dark suit. While I was concerned that TV audiences and some press pundits might focus on Kerry’s appearance to diminish his speech somewhat, I later realized how unlikely it was that they watched the speech in hi-def. I now believe the stories that television executives and personalities have stalled on implementing hi-def television broadcasts because the lower resolution analog signals hide a multitude of sins — including wrinkles on aging on-screen personalities and cheaply made studio sets. Then again, President Bush had visible cotton-mouth during the third and final Presidential debate, and we all saw it without hi-def TV!

In addition to discussing the major TV networks’ failure to honor their public interest mandate, I will conclude this essay by mentioning a few highly potent and ideologically charged themes and ” talking points” that struck me during the media’s coverage of the 2004 election campaign news.

In terms of the broadcast networks’ refusal to cover adequately the Democratic and Republican National Conventions with little public sanction, we should recognize that a major part of the blame rests with the Clinton Administration’s passage of the 1996 Telecommunications Act. This controversial, pro-big business act eroded much of the public interest protections enacted by the FCC’s ” Public Interest Standard” mandates provided by the Radio Act of 1927 and the Communications Act of 1934 that required broadcasters to operate in the “public interest, convenience and necessity.” (See, for example, The Public Interest Standard in Television Broadcasting). Instead, it has devolved even more into a generous government license (or hand-out) to big media conglomerates to print money by leasing the public airwaves to sell their highly profitable wares with little regard for even the smallest measure of public service/interest responsibility. Thus, the big broadcast TV networks had the audacity to announce that they would carry only one hour of live coverage per night of the important national conventions during one of the most crucial political moments of our modern democracy.

The specious alibi that the political conventions are now little more than infomercials or staged shows devoid of real surprise or drama rings hollow indeed. Harvard University’s Kennedy School of Government polls comparing voter interest in the 2000 and 2004 elections showed a dramatic increase among respondents in this year’s presidential campaign. Whether or not viewer interest is up is beside the point. Informed and concerned citizens should demand that broadcast networks honor their public interest responsibility for a measly 8 days every four years, as a minimum condition for retaining their money printing license. Unfortunately it seems, as Frederick Douglass observed more than a century ago, “power concedes nothing without a demand.” I certainly began to notice the networks’ demand for more profits in meeting their responsibility to help advance our democratic process as election year politics heated up in mid 2003. I was struck by the frequency with which political advertisements became news stories in and of themselves. Under the guise of “news,” the cable and broadcast news outlets began featuring “news” stories about political campaign ads.

It does not take a rocket scientist, to use a familiar trope, to recognize the disincentive of the media industries to offer fair and balanced, or equal time to political campaigns when they can extract exorbitant advertising fees while controlling the ideological messages available to their audiences. Lest I be charged with conspiracy mongering, let me share with you (besides Tim Russert’s revelation mentioned above) a couple of recent newspaper headlines and story passages that also make the point convincingly. On Sunday, October 10, 2004 The Los Angeles Times carried an article in its Calendar, Part 1 section entitled, “The attack of the attack ads: Presidential campaign messages are besieging swing states; In this war zone, no one is safe (p. E-1). In the Saturday, October 16, 2004 The New York Times, featured an article on campaign finance entitled “‘527’ Groups Still at Work Raising Millions for Ads” (p. A10). At last I found my proof, my validation, my “aha” moments!

For not only had my suspicions been borne out about the real reason the TV networks were retrenching from their public interest responsibilities, but the Times story also implicated the print media industries in this greed grab as well. After reporting that 527 group supporters of both the Democratic and Republican parties were busily raising tens of millions of dollars to spend on campaign ads to influence the 2004 vote, the article’s focus on the Swift Vets (formerly called the Swift Boat Veterans for Truth) quotes this group as saying, ” The group said it would alternate two commercials on national cable television and in markets in Colorado, Ohio, and New Mexico with $2 million alone spent in Ohio. The group has also sent mail to more than a million households and plans to buy newspaper advertisements in the coming weeks . . .” Now, after hearing time and time again that schools cannot be improved, or the lives of average citizens cannot be improved by throwing money at a problem, what am I to make of such large sums of money being thrown at the problem of ensuring that one political candidate gains the upper hand over another in this so-called democratic process? I think you get the point here. And is there any wonder why the cynical political messages TV’s late night comedians, the probing interventions of knowledgeable non-fiction book authors, internet bloggers, and independent filmmakers resonate so powerfully with the American public these days?