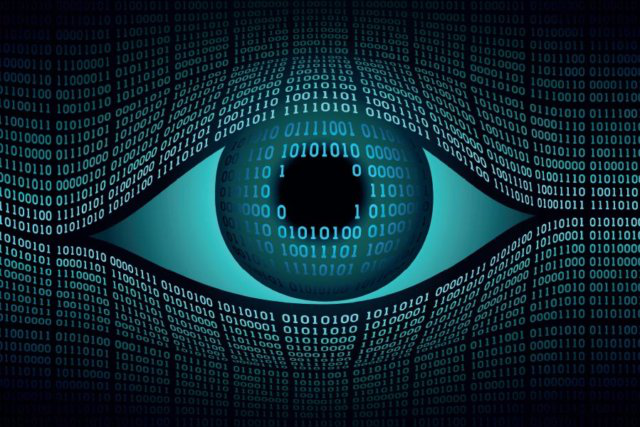 A few weeks on from “Data Privacy Day,” the international holiday aimed at promoting better protection for consumers’ data, the Bezos story is just one of many to raise questions about the individual right to privacy in the digital era. It follows closely on the heels of Facebook’s latest scandal—Apple pulled the company’s services from its app store after the revelation Facebook was paying teenagers to install tracking software on their phones—and years after a ProPublica report that Google had quietly abandoned its ban on collecting personally identifiable tracking data on its users. [ (( Particularly when it comes to Facebook, the hits just keep on coming, fast enough that I decided it’d be unwise to try to keep updating this piece during the proofing process. Editorial: Facebook, Zuckerberg’s sins now include preying on teens. (2019, February 5). The Mercury News. Retrieved from https://www.mercurynews.com/2019/02/05/editorial-facebook-2/; Angwin, J. (2016, October 21). Google has quietly dropped ban on personally identifiable web tracking. ProPublica. Retrieved from https://www.propublica.org/article/google-has-quietly-dropped-ban-on-personally-identifiable-web-tracking.))] Other recent reporting discusses how location information collected from our phones has found its way into the hands third parties ranging from robocallers to bounty hunters, raising deep concerns about individual privacy, personal safety, and even national security. [ (( Vogt, P.J., Goldman, A., Marchetti, D., and Bennin, P. (Hosts.) (2019, January 31). Robocall: Bang bang [Podcast episode]. Reply All. Retrieved from https://www.gimletmedia.com/reply-all/135-the-robocall-conundrum#episode-player; Cox, Joseph. (2019, February 6). Hundreds of bounty hunters had access to AT&T, T-Mobile, and Sprint customer location data for years. Motherboard. Retrieved from https://motherboard.vice.com/en_us/article/43z3dn/hundreds-bounty-hunters-att-tmobile-sprint-customer-location-data-years; Valentino-DeVries, J., Singer, N., Keller, M.H., and Krolik, A. (2018, December 10). Your apps know where you were last night, and they’re not keeping it secret. The New York Times. Retrieved from https://www.nytimes.com/interactive/2018/12/10/business/location-data-privacy-apps.html))] 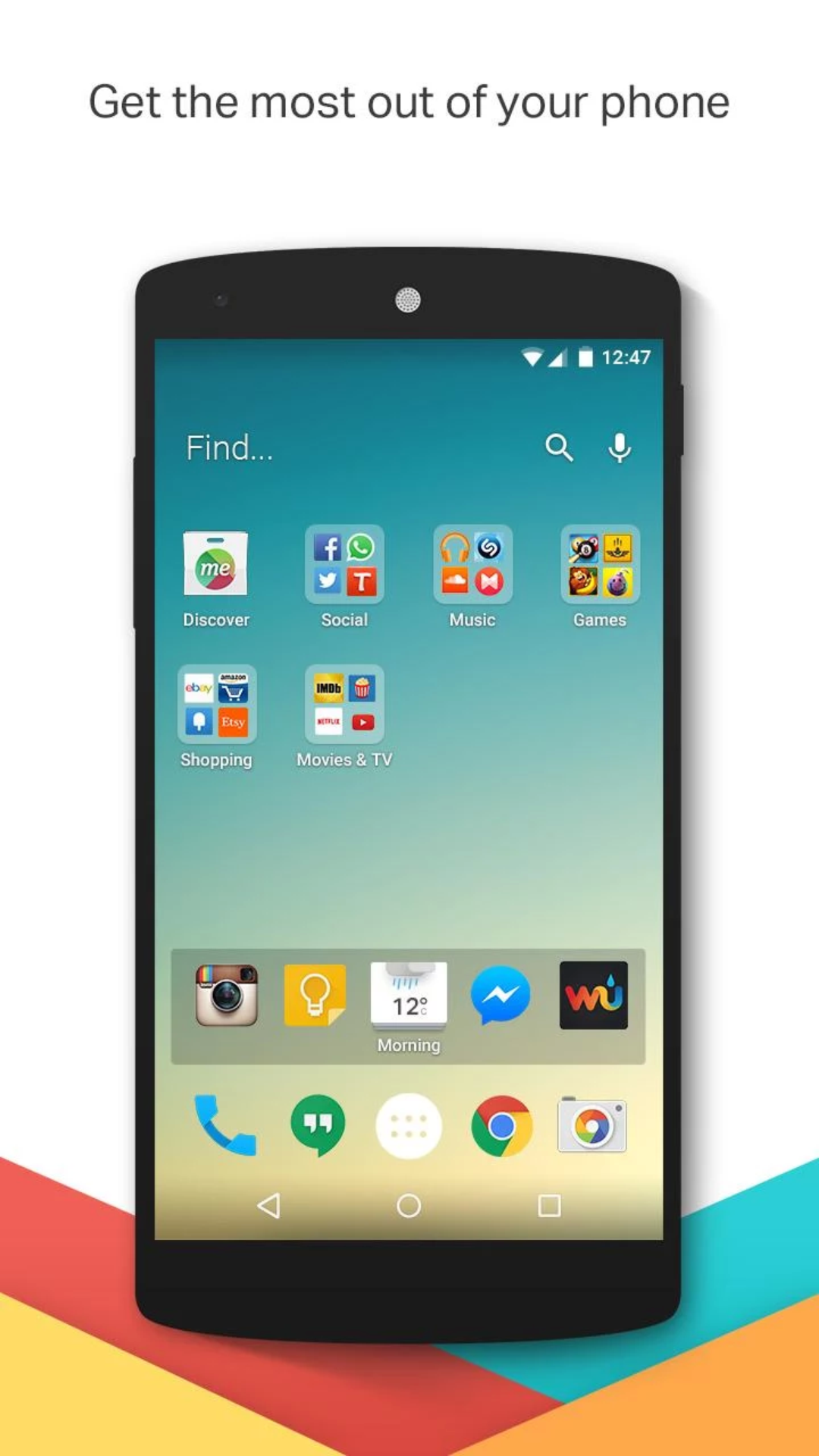 A marketing screenshot for the Android launcher app, EverythingMe, which was downloaded 20 million times and eventually found to have been co-opted into a multi-million dollar ad fraud scheme. Co-opted apps tracked phone users’ behavior as a template on which to base convincing automated traffic, which could then be used to defraud advertisers by faking ad views. [ ((Silverman, C. (2018, October 23). Apps installed on millions of Android phones tracked user behavior to execute a multimillion-dollar ad fraud scheme. Buzzfeed. Retrieved from https://www.buzzfeednews.com/article/craigsilverman/how-a-massive-ad-fraud-scheme-exploited-android-phones-to))] Ad fraud schemes siphon massive amounts of revenue out of the advertising market.

This rash of cuts is especially painful, given that “digital-native newsrooms” were only recently celebrated as one of the few areas in American journalism to have added jobs over the course of a decade-long 25 percent decline in employment led by steady layoffs at traditional newspapers. [ (( Grieco, E. (2018, July 30). Newsroom employment dropped nearly a quarter in less than 10 years, with greatest decline at newspapers. Pew Research Center. Retrieved from http://www.pewresearch.org/fact-tank/2018/07/30/newsroom-employment-dropped-nearly-a-quarter-in-less-than-10-years-with-greatest-decline-at-newspapers))]

These two crucial problems—the erosion of digital privacy and the revenue crisis in American journalism—have tended to be discussed as distinct issues. They are not. [ (( Ryan, J. (2019). The adtech crisis and disinformation [Lecture video]. Vimeo. Retrieved from https://vimeo.com/317245633.))] Rather, they spring from a common origin and, to paraphrase Thoreau, in solving them we would do better to strike at the root than to hack at the branches. [ (( Thoreau, H.D. (1910/1854). Walden. New York: Thomas Y. Crowell & Co., p.98))]

As Malthouse, Maslowska, and Franks put it, programmatic advertising separates “the value of the content product from the audience product.” [ (( Malthouse, E.C., Maslowska, E., and Franks, J. (2018). The role of big data in programmatic TV advertising. In V. Cauberghe, L. Hudders, and M. Eisend (Eds.), Advances in Advertising Research IX . (pp. 29–42). Wiesbaden, Germany: Springer. p. 32.))] Couldry and Turow argue that for traditionally ad-supported news organizations, continuing to chase down advertising revenue in this new environment is thoroughly corrupting. [ (( Couldry, N. and Turow, J. (2014). Advertising, big data, and the clearance of the public realm. International Journal of Communication, 8, 1710–1726.))] As advertisers begin pursuing users with particular behavioral profiles, while paying less and less attention to the actual publications they’re visiting, publishers can no longer rely as they once did on the quality of their work. Rather, they must increasingly play the role of data brokers, participating in user surveillance and producing increasingly personalized and/or shopper-friendly content that bins visitors neatly into behavioral profiles that will better draw the bids of advertisers—advertisers that now, at least in comparison to days past, pay scant attention to the name on a site’s masthead. 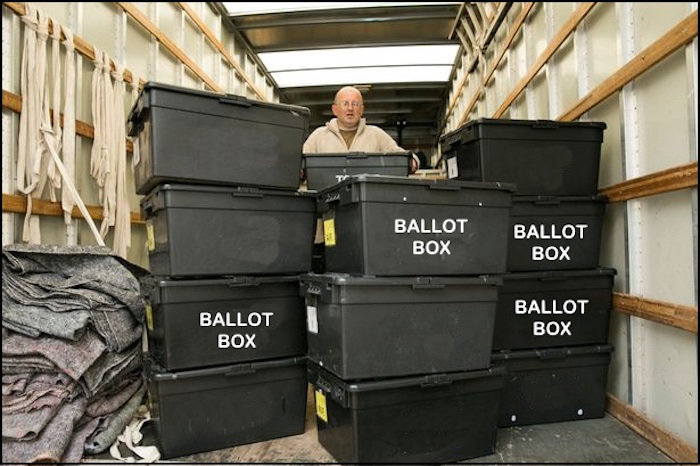 Originally from The Birmingham Mail, this image was appropriated by a hoax news article titled, “BREAKING: ‘Tens of thousands’ of fraudulent Clinton votes found in Ohio warehouse,” that, according to an expose in The Washington Post, was viewed by 6 million people and generated $22,000 in programmatic advertising revenue. Moreover, at the height of this influx of traffic, the web domain where the hoax was posted was appraised for a six-figure sum. [ (( Shane, S. (2017, January 18). From headline to photograph, a fake news masterpiece. The Washington Post. Retrieved from https://www.nytimes.com/2017/01/18/us/fake-news-hillary-clinton-cameron-harris.html.))]

I don’t use the term “scammers” loosely here—Jessica Eklund and I recently published a study in which we examined disfunction in the programmatic advertising industry. [ (( Braun, J.A. and Eklund, J.L. (2019) Fake news, real money: Ad tech platforms, profit-driven hoaxes, and the business of journalism. Digital Journalism, 7(1), 1–21.))] Industry executives explained that many hoax news sites were fronts for outright fraud, ginning up page views with bots and click workers and selling them to advertisers for a profit. Legitimate visitors to these sites were welcome, of course, but often their main value was confusing fraud-detection mechanisms by pushing down the ratio of automated to human traffic.

In short, it might be fair to expect news organizations to endure stiffer competition from new corners—not simply blogs or Craigslist, but gaming apps and recipe sites. However, in the current market, legitimate journalism is competing for ad dollars with sites engaged in aggressive fraud, sometimes with the assistance of ad tech companies themselves. Along with related enterprises like fake traffic generation, these siphon billions of dollars out of the advertising market annually [ (( Fulgoni, G. (2016). Fraud in digital advertising. Journal of Advertising Research, 56(2): 122–125.))], contributing to the larger problem of market failure [ (( Pickard, V. (2015). America’s battle for media democracy. New York: Cambridge.))] in contemporary journalism.

To review, then, the massive system of commercial surveillance we see online not only impacts us in terms of privacy, safety, and security, it has dramatically increased the amount of information pollution [ (( Wardle, C., and Derakhshan, H. (2017). Information disorder. Strasbourg: Council of Europe. Retrieved from https://firstdraftnews.org/wp-content/uploads/2017/11/PREMS-162317-GBR-2018-Report-de%CC%81sinformation-1.pdf))] in the public sphere, gutting news budgets—and hence newsrooms—by driving down the amount paid for ads, turning trusted news organizations into data brokers that produce less civically valuable content, dramatically incentivizing the creation of clickbait and outright disinformation, and kindling remarkable volumes of fraudulent activity that simultaneously fleeces advertisers and diverts hefty amounts of money away from public-interest media.

One recent survey indicated that a sizable majority of the American public already sees the collection of their data in the service of targeted advertising as unethical. [ (( RSA. (2019). RSA data privacy & security survey [Report]. Bedford, MA: Author.))] I imagine they might feel even more strongly about the issue were it more commonly linked with dramatic declines in the health of public-interest media. As we witness the introduction of digital privacy policy conversations and frameworks, whether the GDPR in Europe or bills proposed in individual states here in the U.S., it’s time to begin examining commercial surveillance not just as a privacy issue, but as a notable threat to our media institutions and public discourse.